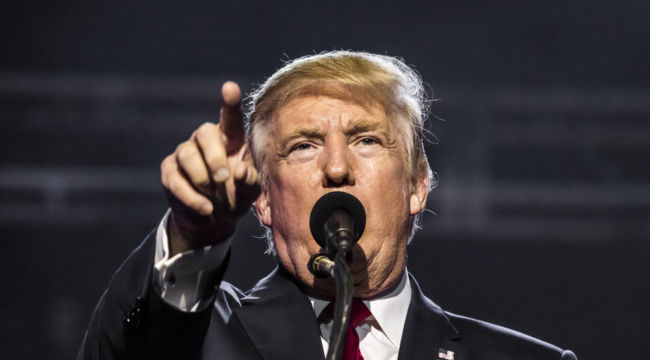 The Fed cut interest rates by 25 basis points on Wednesday, which was a widely expected move.

Of course, President Trump has called for more aggressive action from the Fed and immediately expressed his displeasure by tweeting:

“Jay Powell and the Federal Reserve Fail Again. No ‘guts,’ no sense, no vision! A terrible communicator!”

Trump recently tweeted that the Fed should lower interest rates immediately and should even consider going to “negative” interest rates.

We’re a long way from negative rates right now, but Trump has shown an uncanny ability to read the economy better than the Fed. Trump’s call for negative rates may be a much better indicator of where markets are heading than anything from the Fed’s research department.

This won’t happen all at once. The Fed moves cautiously and slowly, much to Trump’s chagrin. Assuming the Fed keeps up its tempo of 0.25% rate cuts, it would now take seven cuts (and therefore seven FOMC meetings) to reach 0% from the current 1.75–2% target rate.

The Fed meets eight times per year. So assuming one cut at every meeting, it would take almost a year to hit zero. The central bank may pause in rate cuts at one or more meetings based on economic data, so the entire process could take more than a year.

Still, rates could hit zero before the presidential election in 2020, which is just over a year away.

Negative rates before the presidential election are unlikely unless the economy tumbles into a recession, which is unlikely based on the best available data. But if Trump wins a second term (a 67% probability, according to my models), his pressure on the Fed will continue.

I recently attended a closed-door, off-the-record session with two senior Fed officials who indicated that negative rates are being seriously considered, even though no final decisions have been made.

Rates may seem low today, about 1.77% on the 10-year Treasury note and under 2% on the fed funds target rate. And in nominal terms they are. But they could go much lower as they already have in Germany, Japan and elsewhere.

When it comes to interest rates, the U.S. is the tallest midget in the circus, in other words. That means huge capital gains for investors who buy the notes today.

That’s because bond prices increase as rates fall. Today investors are buying bonds with negative yields, which seems to make no sense. I mean, who would buy a bond that actually loses you money if you hold it to maturity?

But these investors don’t plan on holding the bonds to maturity. They’re betting on interest rates going lower, which increases the price of their bonds. And they plan on selling these bonds for a nice capital gain.

That’s how bond investors can make money even if the bonds trade at negative yields. This may be yet another example with upside for investors who take heed.

Getting back to Trump, his economic forecasts have been highly accurate — and better than the Fed’s. We may indeed see negative interests at some point, although it could take longer than he wishes.