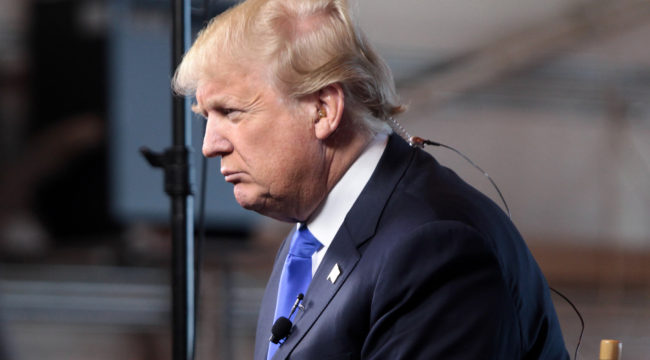 Is Trump Bluffing on Tariffs?

Is Trump backing down on tariffs?

This weekend, the president pledged he’s “not backing down.”

How did markets react yesterday?

As if Trump will back down — or at least back off.

Among the day’s biggest winners were Boeing, Harley-Davidson and Caterpillar… all potential casualties of the tariffs.

Tariffs on Steel and Aluminum will only come off if new & fair NAFTA agreement is signed.

We’re not half so sure.

It seems Trump’s “flexibility” has Canada and Mexico doing the bending.

Neither is inclined to do much, if Reuters is to be credited:

A move by Washington to link the steel and aluminum tariffs to progress on NAFTA was rebuffed by Canada and Mexico.

Perhaps we are seeing the master negotiator at his tricks, the Art of the Deal taking form before us.

But this we do know:

The next test for markets comes this Friday…

Friday is when February’s employment numbers are released.

They revealed an unexpected jump in average hourly earnings.

That raised the specter of inflation… and aggressive rate hikes by the Federal Reserve.

New Fed Chairman Jerome Powell has in fact claimed that “inflation is moving up to target.”

Stocks uncorrected in the weeks that followed, recapturing most of their losses — until the tariff news broke last Thursday.

And it will likely raise rates aggressively this year.

Markets could therefore sell off once again… and for the same reason they sold off last month.

“All bets are off if [the] number tops 3% — another Wall Street sell-off could be in the cards.”

Wages last increased at a 3% annual rate, MarketWatch reminds us, in 2007 — immediately prior to the Great Recession.

Why should that matter?

January unemployment also rang in at a hale and hearty 4.1%.

If February’s dips to 4% or lower… it may augur ill for the economy, oddly enough.

Nicole Smith, chief economist at Georgetown University’s Center on Education and the Workforce:

The evidence, in graphic detail: 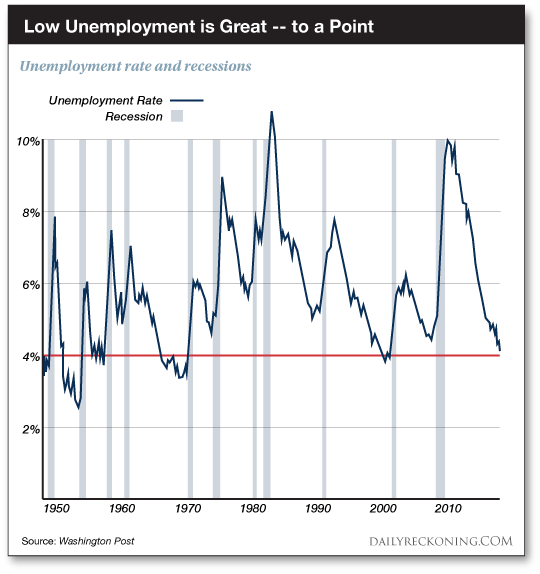 If you’ve ever thought the Fed’s timing leaves something to be desired, here is your validation.

Jim Rickards has often warned that its planned rate hikes are sowing the seeds of the very recession it’s attempting to prevent.

Meantime, the Fed is drawing down its balance sheet… and central banks around the world are planning to withdraw “stimulus” this year.

They will almost certainly reverse course if the porridge hits the propeller, but will it be enough next time?

“It is always dawnest before the dark,” says our co-founder Bill Bonner.

Let us hope they can keep the sun in the sky for a while longer.

It could be a long night that follows…