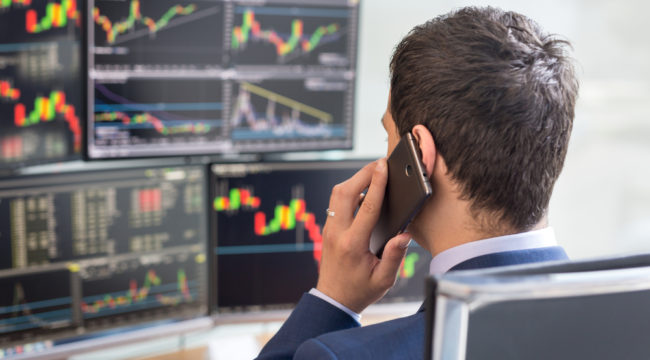 The Trading Revolution Can Make You Rich

And you’re about to see how technology is opening up a whole new world of opportunity that has never before been available to you, the individual investor. I’m not talking about investing in new technology, by the way. I mean that new technology is changing the way trading has been conducted for hundreds of years.

And that could be incredible news for you — if you know how to take advantage of it. Let me show you what I mean…

Travel agents, bank tellers, most brick-and-mortar stores, etc, have all been displaced by computers.

But nowhere has the tech-boom been as hard-hitting as on the trading floor of market exchanges. There used to be 15,000 guys down on the floor in the Chicago Board of Trade alone for example, where I spent many years of my life. Now? There’s maybe a thousand on any given day.

For hundreds of years the order route was the same…

You called your broker with a buy or sell, the broker called a desk on the floor, a phone clerk wrote the request on a ticket, a runner “ran” the trade to the trading pit where a broker would execute the trade. An endorsed filled order card was grabbed by another runner and brought back to the desk, a phone call was made to your broker and they in turn called you with your confirmation.

This was intense. Tens of thousands of sweaty, belligerent, almost all alpha males battled daily in a zero sum game. It was an absolute free-for-all, but it was capitalism at its finest. It was America. It was you and the markets and the other guys.

I was there with them, personally elbowing for space in the Treasury Bond pits. That was back in the heyday of the pits, when bonds actually paid substantial interest.

But today, the trading floor of lore, and the “floor trader” is dead.

Because of technology, anybody and everybody can trade in any market anywhere anytime. Money never sleeps. It moves around the globe at lightning fast speed, or the speed of greed if you will.

A man doesn’t stand in the pit to trade anymore, he presses buttons on a laptop. Electrons fly and buy.

Fact is, right now you can click your computer or smartphone and instantaneously buy or sell anything, anywhere around the world, any time day or night. The opportunity now is so much greater than it was when I was a young trader.

The disappearance of the floor means nobody has an advantage anymore.

Big traders and small, short and tall all have equal access to opportunity. (I was disparagingly told I was hired because of my 6 foot 3 height to be seen on the floor, not my intelligence — but I beg to differ.)

When I was younger, you would trade in one pit, and your opportunities were limited to that market. If something wasn’t happening and the markets weren’t moving, you were hard-pressed to make money.

Now, I can trade any market, any direction, any time, just looking at a screen. It also allows me to be much more patient for great trade set-ups. That wasn’t a luxury that pit traders had back in the day.

And in today’s digital marketplace that means one thing — the potential to profit has never been greater.

With 24-hour markets, everyone now has the chance to join the elite money club of past floor traders and big money market players.

This is a trader’s paradise.

Technology has leveled the playing field not only from the standpoint of the trading floor, but the tools that an individual investor can use.

Morgan Stanley and Goldman Sachs once had the best technology on the trading floor. Now everyone has the same ability to execute an order at lightning speed.

That means millions of investors have the technology and tools to profit like never before. This is a revolution in trading. There are no longer any barriers to entry.

What if I told you there was a new way to know exactly what to trade… and when to trade… using a revolutionary trading tool that no one else has access to?

I’ve been in the market over 25 years, and I’ve seen superstars and superb trading strategies come and go. But now, I think I’ve finally locked onto the holy grail that lets you take advantage of the trading revolution for maximum, consistent profits…

See, I’m one of just 432 people in the world who has access to a powerful new market indicator… an indicator that tips you off about impending big market news… before the news becomes public.

It’s so transformative that its inventor, a colleague of mine who I can’t name right now, filed a patent with the U.S. Patent and Trademark Office to make sure no one else steals it:

To the best of my knowledge, there’s no other market indicator like it in the entire world.

I was skeptical at first. After all, I spent 25 years working in the heart of one of the biggest exchanges in the world. And I had never heard anything like it.

But then my colleague showed me all the proof. And chart after chart after chart… proving the indicator worked. I came away convinced, my mind blown (go here now to see how you can learn all about it).

So as you can imagine, this is very sensitive information. It could send shockwaves through Wall Street.

What makes this market indicator so special?

Virtually every other trading system that I’m aware of is based on price data. That is, they only trigger a “buy” signal when the price changes — after the big move has already happened. By the time you get in, you’ve already missed the biggest gains.

“You’re either on the inside or the outside?”

Well, everyday investors like you have always been “on the outside.” Only insiders with access to special information were able to profit from major market-moving events.

The everyday investor was simply left out in the cold. But no longer.

This revolutionary market indicator is completely different. It gives you the critical information you need before the big price moves happen. It lets you get ahead of everyone else in the market, and profit when the information finally becomes public.

That’s why it’s patent-pending. This market indicator is that special.

Just ask yourself… how many people who’ve created trading platforms have gone through the time and the huge expense it requires to file a patent with the U.S. Patent Office? That’s an enormous undertaking.

I’ve done tons and tons of back testing to see just how effective this special indicator is. And the results were nothing short of shocking.

That testing showed me this indicator has the potential to produce an average weekly gain of 350%!

That’s pretty amazing when you think about it. But that’s what all that testing showed, honest to goodness.