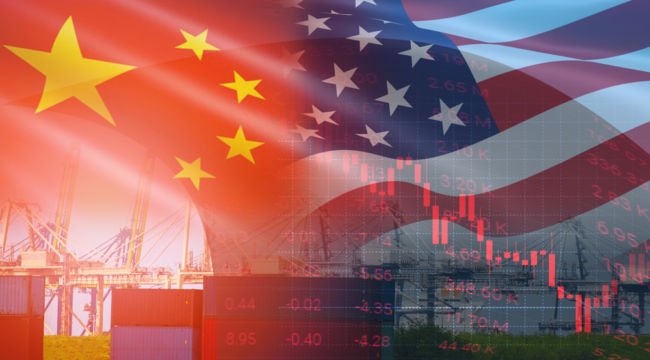 Markets are eagerly awaiting the conclusion of the so-called “phase one” trade deal between the U.S. and China.

Both parties are trying to reach a mini-deal involving simple tariff reductions and a truce on new tariffs along with Chinese purchases of pork and soybeans from the U.S.

A deal is still possible. But investors should be prepared for a shocking fall in stock market valuations if it does not. Markets have fully discounted a successful phase one, so there’s not much upside if it happens.

On the other hand, if phase one falls apart stock markets will hit an air pocket and fall 5% or more in a matter of days.

But even if the phase one deal goes through, it does not end the trade wars. Unresolved issues include tariffs, subsidies, theft of intellectual property, forced transfer of technology, closed markets, unfair competition, cyber-espionage and more.

Most of the issues will not be resolved quickly, if ever.

Resolution involves intrusion into internal Chinese affairs both in the form of legal changes and enforcement mechanisms to ensure China lives up to its commitments.

These legal and enforcement mechanisms are needed because China has lied about and reneged on its trade commitments for the past 25 years. There’s no reason to believe China will be any more honest this time around without verification and enforcement. But China refuses to allow this kind of intrusion into their sovereignty.

For the Chinese, the U.S. approach recalls the Opium Wars (1839–1860) and the “Unequal Treaty” (1848–1950) whereby foreign powers (the U.K., the U.S., Japan, France, Germany and Russia) forced China into humiliating concessions of land, port access, tariffs and extraterritorial immunity.

In order to break the impasse between protections the U.S. insists on and concessions China refuses to give.

This points to the fact that the “trade war” is not just a trade war but really part of a much broader confrontation between the U.S. and China that more closely resembles a new Cold War.

This big-picture analysis has been outlined in a speech given by Vice President Mike Pence in October 2018 and a follow-up speech delivered on Oct. 24, 2019. Both speeches are available on the White House website.

Secretary of State Mike Pompeo has also added his voice to the hawks warning that China is a long-term threat to the U.S. and that business as usual will no longer protect U.S. national security.

Pictured above are Vice President Mike Pence (l.) and Secretary of State Mike Pompeo (r.). Pence and Pompeo have taken the lead in the public criticism of China by the Trump administration. In a series of speeches and interviews they have pointed out egregious human rights violations, blatant theft of intellectual property and threatening military advances that should cause the U.S. to treat China as more of a geopolitical adversary than a friendly trading partner.

The views of Pence and Pompeo, often captured under the heading of the Pence Doctrine, were neatly summarized by China expert Gordon G. Chang, author of The Coming Collapse of China, in a Wall Street Journal Op-Ed on Nov. 7, 2019, quoted below:

The Trump administration is heading for a fundamental break with the People’s Republic of China. The rupture, if it occurs, will upend almost a half century of Washington’s “engagement” policies. Twin speeches last month by Vice President Mike Pence and Secretary of State Mike Pompeo contained confrontational language rarely heard from senior American officials in public.

“America will continue to seek a fundamental restructuring of our relationship with China,” the vice president said at a Wilson Center event on Oct. 24 as he detailed Chinaʼs disturbing behavior during the past year.

Some argue the vice presidentʼs talk didnʼt differ substantively from his groundbreaking October 2018 speech, but these observers fail to see that in the face of Beijingʼs refusal to respond to American initiatives, Mr. Pence was patiently building the case for stern U.S. actions.

Moreover, the vice presidentʼs thematic repetition was itself important. It suggested that the administrationʼs approach, first broadly articulated in the December 2017 National Security Strategy, had hardened. That document ditched the long-used “friend” and “partner” labels.

Instead it called China — and its de facto ally Russia — “revisionist powers” and “rivals.”

At a Hudson Institute dinner last Wednesday, Mr. Pompeo spoke even more candidly: “It is no longer realistic to ignore the fundamental differences between our two systems and the impact… those systems have on American national security.” Chinaʼs ruling elite, he said, belong to “a Marxist-Leninist party focused on struggle and international domination.” We know of Chinese hostility to the U.S., Mr. Pompeo pointed out, by listening to “the words of their leaders.”

The U.S.-China trade war is not the anomaly globalists portray. It’s not even that unusual viewed from a historical perspective. Retaliation from trading partners is all in the game.

Trump’s tariffs on China in January 2018 were reputedly the start of a trade war, but the war was actually begun by China 24 years earlier when China devalued its currency (1994) and continued when China joined the WTO (2001) and immediately started to break WTO rules.

The trade battle is now joined, but no critical issues have been resolved and none will be in the near future. The U.S. cannot accept Chinese assurances without verification that intrudes on Chinese sovereignty.

China cannot agree to U.S. demands without impeding its theft of U.S. intellectual property. This theft is essential to escape the middle income trap that afflicts developing economies.

The EU is caught in the crossfire. The U.S. is threatening to impose tariffs on German autos and French agricultural exports as part of an effort to force an end to German and French subsidies to favored interests.

The U.S. will win the trade wars despite costs. China will lose the trade wars while maintaining advantages in intellectual property theft. Trade wars will continue for years, even decades, until China abandons communism or the U.S. concedes the high ground in global hegemony.

Neither is likely soon.