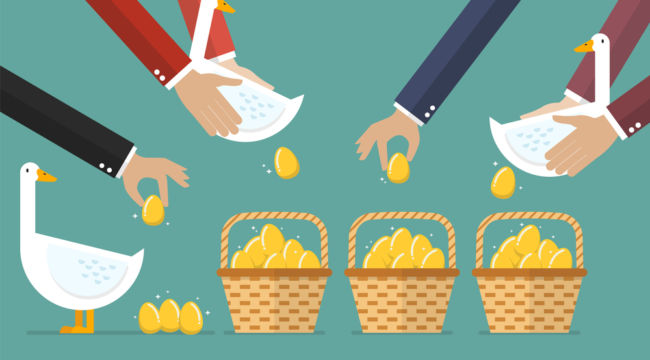 Never before have so many owed so much… to so few.

We refer not to Sir Winston Churchill and the Battle of Britain. We refer instead to the Federal Reserve and stock market.

Set aside the latest coronavirus rattles…

The market has been on a gorgeous spree since Mr. Powell and his mates reopened the liquidity spigots last January.

But only a very few stocks account for its joy. These are the wagon-pullers of this market, the draft horses hauling the laggards along.

These combined behemoths boast a market cap in excess of $4.1 trillion — over 10% of the stock market’s overall $34 trillion.

When they move, they drag the market along. And moved they have…

Apple has returned some 112% this past year. Microsoft has gained over 75%. Alphabet has added perhaps 20%. Amazon has gained roughly 25%. Facebook has put in a 44% advance.

These mighty five account for virtually all of last quarter’s S&P earnings upside. Wash them out — and the S&P’s earnings amounted to naught.

And as SocGen data hound Andrew Lapthorne informs us…

S&P net income actually plunges 7.5% if you minus out the contributions of these five colossi.

We should not be surprised, then, that the vast majority of S&P components have taken in their sails… and reduced their stock buybacks.

The Rich Get Richer

Their buybacks increased 10.5% over the same space. Buybacks tend to inflate — artificially — the stock price.

Is it then a wonder that these stocks presently outpace the broader market by the largest margin ever… as Lapthorne informs us?

It is no wonder whatsoever.

But what if these wagon-pullers pull up lame?

All the Market’s Eggs in Five Baskets

These mega tech firms have been the front-runners in this record-long bull market as investors bet on superior growth and dominant market share in their respective industries. They were the biggest contributors to the market’s historic gains last year and the trend shows no signs of stopping in 2020. However, multiple Wall Street strategists are sounding alarms on the increasing dominance of Big Tech, warning of a potential pullback in the stocks ahead.

The coronavirus has taken a deep bite of this Apple.

Much of their gadgetry rolls out of Chinese factories. Yet the coronavirus has these factories running far beneath capacity.

And Apple has closed the doors on all 42 of its Chinese stores. None has reopened.

Apple is shaving down first-quarter revenue projections in consequence.

What is more, the woes may continue…

A certain Bill Lu directs Asian semiconductor research at UBS. From whom:

The impact starts looking bigger and bigger, and in the coming weeks, the impact will grow. Inventory is low in the smartphone supply chain.

What if the coronavirus extends its siege into the second quarter, the third… the fourth?

We issue no prediction of course. We merely raise possibilities. Meantime…

That is a record — never has the market tested dizzier heights.

But if investors — or the computer algorithms — drop the Apple, gravity should give the overall market a good hard tug…

The Higher They Rise, The Farther They Fall

Again, a mere handful of stocks are doing a majority of the pushing. Apple is one of them.

But if a mere handful of stocks push the market higher… they can also drag it in the other direction.

Compounding the trouble is the strategy of “passive investing.”

Passive, because it rises or falls with the gravitational tide.

After the 2008 near-collapse, the Federal Reserve emptied in oceans of liquidity.

The tide rose — and all with it.

The Facebooks, Apples, Amazons, Googles and Microsofts of this world have led the way up.

Much of Wall Street poured into these stocks… put its feet up, loafed… and let gravity take it to record highs.

“Fundamentals” no longer mattered. The Federal Reserve has rendered them quaint.

The Death of Fundamentals

And so the Federal Reserve has blown an artificial bubble. Laments analyst Sven Henrich of NorthmanTrader:

A market that never discounts any reality by force of constant intervention is by definition an artificial bubble.

Central banks have made a mockery of price discovery and the free flow of capital.

All markets are now are a central bank policy chase operation…

Only the outperformance of the mighty five has masked the warts within:

The larger market of stocks is in a much larger earnings recession already and five stocks have been masking it all.

And so global markets are at all-time highs with Japan in a recession, Germany at 0% GDP growth and the second-largest economy in the world [China] with 330% debt to GDP at a virtual standstill.

All is peace while the tide rises… and gravity lightens. But the danger is this, as we have written before:

When the tide recedes… it recedes with fearful vengeance.

And gravity dramatically reasserts its dominion.

The same handful of stocks that hauled markets up on one tide can drag them rapidly down on another.

The result is a delirium.

It is this panic selling that gave the Dow Jones an impossible 22% whaling on 1987’s “Black Monday.”

Jim closes with a thumping conclusion:

“This is one more reason why the next stock market crash will be the greatest in history.”

And five stocks may well lead the way down next time…