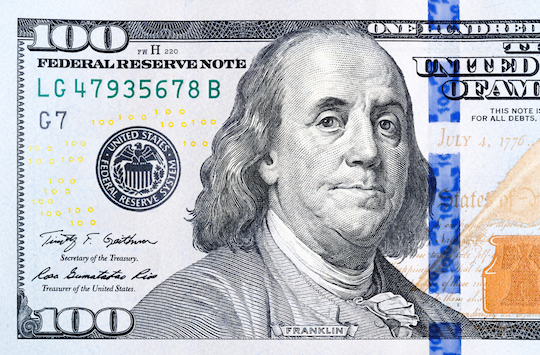 This Time Is Different — No, Really

“Experience keeps a dear school,” said Ben Franklin, “but fools will learn in no other.”

He ignores both the living and the dead… the immemorial dead, whose whispers carry the distilled wisdom of history.

No — this time is different, comes the fool’s eternal cry.

The past is of no use to me.

Rising economic interdependence had rendered war obsolete, argued the foolish author of The Great Illusion in 1909.

The events of 1914 — a mere five years hence — revealed the true illusion:

The illusion that rising economic interdependence had rendered war obsolete.

The dead knew better. But no one sought their ghostly counsel.

The 1920s had roared… and the arc of industry bent in one direction — up.

A cataclysm was all but impossible.

The crash cleaned him out.

If only he had felt the dead tugging at his elbow… warning him.

The longer departed would have recalled the Financial Panic of A.D. 33. The banking crisis of 1345. Tulip mania. The South Sea Bubble. The Mississippi Bubble.

And more… many more.

“This time” was no different.

But with the hubris so typical of the living, Fisher turned away.

Of course he was not alone…

The Business Week, on the widespread illusion that “this time is different,” dated Nov. 2, 1929:

This illusion is summed up in the phrase “the new era.” The phrase itself is not new. Every period of speculation rediscovers it… During every preceding period of stock speculation and subsequent collapse business conditions have been discussed in the same unrealistic fashion as in recent years. There has been the same widespread idea that in some miraculous way… the fundamental conditions and requirements of progress and prosperity have changed, that old economic principles have been abrogated… that business profits are destined to grow faster and without limit, and that the expansion of credit can have no end.

Does this passage not describe our very times?

You do recall the tech boom?

We were told the internet had revolutionized the economy.

Companies no longer needed to show profits… or revenue.

This time was different — until it wasn’t.

We next draw your attention to what Doug Ramsey, CIO of Leuthold Group, calls the “scariest chart” in his database: 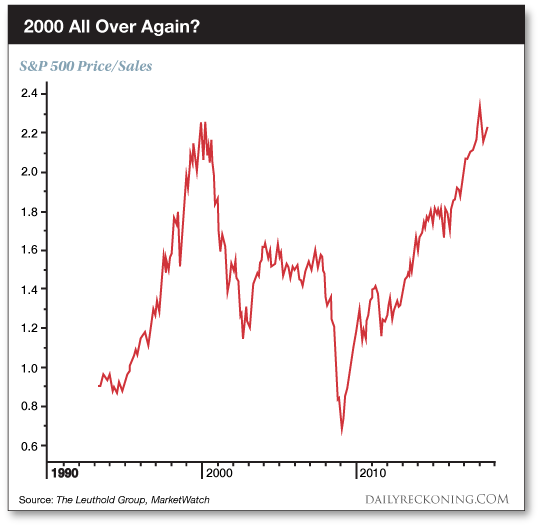 It tracks the price-to-sales ratio, one indicator of a stock’s value.

This metric lives in the shadow of the far more common price-earnings ratio.

But since it is based on actual revenue, many consider it a truer reading and less easily manipulated.

What does the chart reveal?

That today’s price-to-sales ratio excels that of the tech boom.

Ramsey on the parallels to today:

The statistical similarities between the two bulls are on the rise, and the wonderment surrounding the disruptive technology of today’s market leaders seems to have swelled to maybe 1998-ish levels.

Overvaluation in 2000 was highly concentrated; today it is pervasive, with the median S&P 500 price-to-sales ratio… more than double the [ratio] prevailing in February 2000.

Let us draw another cloud across the sky…

You are likely familiar with the flood of margin buying in the late 1920s.

The fools rushed in with borrowed money to collar stocks destined for a “permanently high plateau.”

Cometh the crash, the fools were wrecked beyond hope.

TheStreet.com informs us that total margin debt has exceeded 3% of GDP on three occasions:

We are further notified that today’s leverage is 55% higher than the peak of the 2007 bubble.

Meantime, the Dow Jones has risen fourfold since its March 2009 low — a nearly identical run-up to its 1929 summit.

Let us hope, for the sake of the leveraged, this time is different.

But we fear it is not…

U.S. large-cap stocks are the most overvalued in history, higher than prior speculative mania market peaks in 1929 and 2000… Brutal bear markets and recessions have historically followed from record valuations like we have today.

“This time will almost certainly be no different.”

But is the end imminent?

We’ve suggested before that the business could peg along another year or two.

But taking our leaf from Matthew 25:13… we know neither the date… nor the hour.

Nor does anyone else among the quick.

But we have come to conclude that man’s ability to forget nears infinity, that his capacity for self-delusion knows no boundary.

This time, truly, is never different.

“We have been here before,” say economists Kenneth Rogoff and Carmen Reinhart, co-authors of This Time Is Different: Eight Centuries of Financial Folly.

Rogoff is a villain in these parts — a preaching evangelist of the cashless society. And we oppose his anti-cash partisanship tooth and talon.

But if Hitler had invaded hell, Churchill said he would have made a favorable reference to the devil in the House of Commons.

We proceed in that spacious spirit…

No matter how different the latest financial frenzy or crisis always appears, there are usually remarkable similarities with past experience from other countries and from history…

Financial crises follow a rhythm of boom and bust through the ages. Countries, institutions and financial instruments may change across time, but human nature does not…

We hope that the weight of evidence… will give future policymakers and investors a bit more pause before they next declare, “This time is different.” It almost never is.

The dead know this lesson well.

But so few people listen to the dead these days…