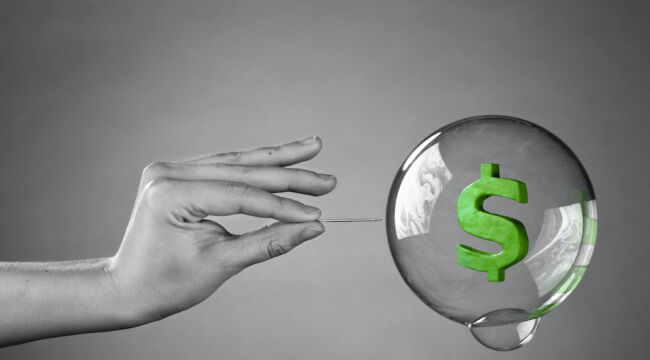 This Is How Long the Bubble Will Last

THE underlying economy (U.S. and global) has a strong deflationary bias. Central banks can’t tolerate deflation, so they respond with inflationary measures such as money printing, zero rates and guarantees of all major securities markets.

Those policies won’t actually cause inflation, for reasons explained below. But, they will cause bubbles in certain asset classes, especially stocks.

There’s a serious question as to whether the central bank “inflationary measures” will actually work. They won’t.

Powell can talk all he wants about asymmetric inflation targeting and letting the economy run a little “hot” for longer than expected, as he did in his Jackson Hole speech on August 27, but he doesn’t actually know how to make inflation happen.

As I’ve stated repeatedly, money printing alone doesn’t cause inflation without velocity. And right now velocity is dropping sharply, as it has since 1998.

Libertarians, Austrian School economists, Monetarists and Neo-Keynesians all got it wrong. They yelled that Fed “money printing” would lead straight to inflation. What they missed is that money printing does not cause inflation. It’s velocity (the turnover of money) that causes inflation.

Velocity is a psychological phenomenon outside the Fed’s control (unless the Fed wants to bid up the price of gold, which is not even remotely being considered at the moment). Not only is inflation not a danger; deflation is much more likely and is a much greater danger to the financial system.

Deficit spending also does not cause inflation when government debt levels are over 90%; right now they’re 135% and climbing. Inflation also does not happen when there’s slack in the economy, such as 30 million unemployed.

So, there’s no real inflation threat on the horizon.

There’s no doubt that inflation will emerge in the end. But, the timing is tricky; it could take several years of monetary ease and dollar debasement (mostly relative to gold) before inflation finally takes off.

This does not mean that money printing has no impact. It does. Money printing may not cause price inflation, but it does create asset bubbles in stocks, bonds, real estate, commodities and other asset classes.

The most likely impact of Powell’s new Fed policies is therefore not consumer inflation, but asset bubbles. These have already emerged.

Of the various assets, real estate is a mixed-bag now because low interest rates, which help values, are being offset by mass migration from the cities, which hurts commercial real estate values.

There’s a lot of skepticism in the bond markets because interest rates are already so low. Rates will go lower, even negative, but skepticism puts a break on the bond bubble.

The one clear winner is the stock market.

How Long Can the Bubble Last?

With a fundamentally weak economy and a continuing pandemic, how much longer can the stock market melt-up continue?

Right now, my models are telling me that the stock market rally will continue as long as the Fed monetary ease continues or gets even easier.

But the trend is up.

All three major indices traced a similar pattern over the course of 2020, albeit with less volatility in the NASDAQ 100. All three achieved new all-time highs between February 12 and February 19 before the full-impact of the COVID-19 pandemic had been internalized by market participants.

All three also crashed sharply from February 21 (when the Italian data began to reveal that the disease was not contained in China) until March 23. 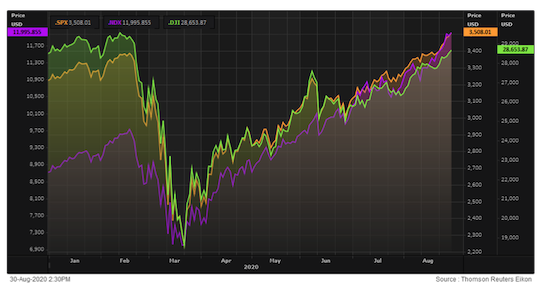 Then all three began historic rallies that ended the shortest bear market in history. The SPX and NDX reached new all-time highs on June 5 (NDX) and August 18 (SPX). SPX and NDX have continued to even higher levels since those dates.

March 23 Is the Magic Date

What happened on March 23? Why was that date the turning point for all three stock indices?

March 23 was the day the Federal Reserve announced what it called “extensive new measures to support the economy.” These measures included the following:

What the Fed was saying was that it would use its printing press to support the government bond market, the mortgage market, the municipal debt market, the corporate debt market, commercial paper, money market funds and consumer loans through a combination of secured lending (repo), direct purchases or guarantees.

In the months following March, the Fed piled on even more trillions of dollars of programs and guarantees on top of those announced March 23. The announcement was like the starting gun in the 100-yard dash. The markets took off like a rocket and never looked back.

Still, the Fed wasn’t finished. In recent months, the Fed announced even more programs to support sectors of the market they missed in March including junk bonds, foreign central banks, municipal bonds and commodities.

In short, the Fed sent a loud and clear signal that no financial institutions would fail and no markets would be allowed to crash. None have.

Stock market investors correctly concluded they had a one-way bet. If markets went up, they made money. If markets fell, the Fed would prop them up and they would make money. There was practically no way to lose money, at least in the short run.

“A Day of Reckoning Will Arrive, But Not Yet”

The stock market bubble will not continue forever. The easiest way to pop the bubble is for the Fed to reverse course and tighten monetary policy with reductions in its balance sheet, termination of its rescue facilities or interest rate hikes.

None of these are on the horizon. In fact, the Fed recently announced that investors could expect zero interest rates for years to come.

The other way the stock market bubble could end is if the gap between market perception and reality suddenly closes. The perception is that the Fed can prop up markets with monetary ease.

The reality is that the economy is in the worst depression since the Great Depression.

Output in the second quarter of 2020 fell by the greatest amount in history. (Third quarter output will show a strong bounce, but not nearly enough to recover the losses in the first half).

Unemployment is the highest since the late 1940s, and may go higher in the months ahead as a second wave of layoffs emerges after the termination of the Payroll Protection Plan, a loan program geared to keeping employees on the payroll.

Small businesses are failing by the hundreds of thousands and associated job losses will be permanent, not temporary.

When a gap opens up between perception (the stock market) and reality (a new depression), reality always wins. But, it can take time.

The perception that the stock market can be propped up by the Fed will prevail at least through Election Day, possibly longer.

A day of reckoning will arrive, but not yet.