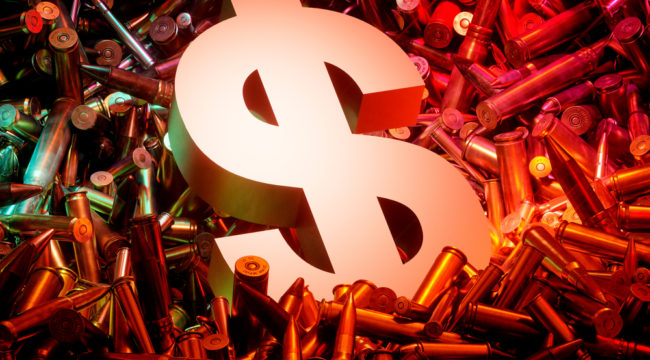 The Third Front in the War on Cash

Governments advance against the entrenched center…

The banks move against one vulnerable flank…

Now the credit card companies have sprung against the other.

Visa is now offering small merchants using its payment systems $10,000 each to help them upgrade those systems.

In exchange for this “gift”… they can no longer accept cash payments.

Visa Inc. has a new offer for small merchants: take thousands of dollars from the card giant to upgrade their payment technology. In return, the businesses must stop accepting cash.

The company unveiled the initiative [last] Wednesday as part of a broader effort to steer Americans away from using old-fashioned paper money. Visa says it is planning to give $10,000 apiece to up to 50 restaurants and food vendors to pay for their technology and marketing costs, as long as the businesses pledge to start what Visa executive Jack Forestell calls a “journey to cashless.”

And “salvo” seems to be just the right word here — it implies an enemy on the receiving end.

That would be cash itself. And by extension, you — if you value the financial privacy cash affords you.

“We’re focused on putting cash out of business.”

Obviously. But what motivation lies back of it?

As is so often the case in this fallen and human vale of sin… manna.

The payment networks that want to kill cash (and checks!) as competitors to their oh so terrific (and fee-gouging) credit and debit cards.

Those oh so terrific and gouging credit and debit card fees run to about 2% of total transaction costs, says the National Retail Federation.

Multiplied millions of times a day, that 2% accumulates… rapidly… and in Visa’s favor.

Visa is trying to cony in on economic sectors running heretofore on cash… like food vending and parking services.

But also on sectors traditionally run by check… like rent payments.

About 35% of all U.S. households are renter-occupied, according to the National Multifamily Housing Council — at least as of last October.

We don’t know what percentage of their occupants sign a monthly rent check. But we hazard it’s pretty handsome.

In Visa’s vision, the venerable old rent check would fall like the dodo. And a digital phoenix would rise in its place.

So from Visa’s self-interested perspective, here is a vast field of untapped profit — for now.

This February, we suggested that cash will vanish not so much because it’s illegal… but because elites convince us all of its inconvenience:

Going digital… could practically eliminate petty crime, free up resources and save forests of trees into the bargain.

And that’s how elites will peddle it…

In any case, the tempting attempts to impose de-cashing by a decree should be avoided, given the popular personal attachment to cash.

The message, clear as a rifle shot at dawn: Don’t frighten the horses with talk of an outright ban.

Sell the cashless society on its convenience (e.g., more use of mobile phones to pay for coffee).

The surest way to lull someone into complacency is to offer a “convenience” that quickly becomes habit and impossible to do without.

The convenience factor is becoming more prevalent, and consumers are moving from cash to digital payments just as they moved from gold and silver coins to paper money a hundred years ago.

So how does Jim think you can fight back in the war on cash?

The way he does:

A significant portion of my wealth is in nondigital form, including real estate, fine art and precious metals in safe, nonbank storage.

Wealth outside the banking and digital payment systems, that is.

Governments and banks assault cash by day and by night.

Now with the credit card companies escalating their own offensive, valiant cash could soon enough be surrounded… all escape routes closed… forced to accept terms…