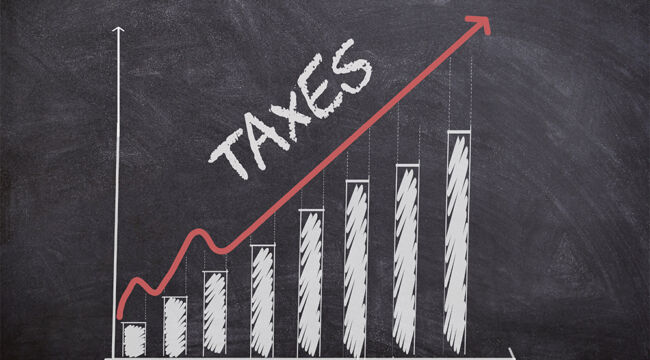 Inflation is not a guessing game anymore; it’s here. Every time you buy gas at the pump or groceries at the supermarket or book a plane ticket, the price increases are staring you in the face.

The problem is that inflation cannot be isolated. It’s not limited to what you pay to fill up your car, for example. Truckers have to pay the same higher prices for diesel fuel, which add to transportation costs and to the final prices of delivered goods.

It’s a clear example of the ripple effect.

The government borrows dollars, and you earn dollars. Taxation is one way that governments take money from citizens to pay off government debt. But taxes are unpopular and hard to get approved by Congress.

So inflation works the same as a tax increase except that you can’t see it and Congress doesn’t have to lift a finger. Nice, right?

You got a raise in nominal terms, but you took a pay cut in real terms. Many people are not familiar with this simple formula for converting nominal gains to real gains. But everyone is familiar with how long their paycheck lasts.

More and more Americans are finding that by the time they pay the rent or mortgage, put gas in the car, buy groceries and pay some medical bills, they’re out of money. They’re waiting for the next paycheck. There’s nothing left over for a dinner out, a new pair of shoes or a visit with family members.

The economic consequences of this decline in real incomes are huge. If you buy coffee at the grocery store instead of going to Starbucks or go jogging instead of paying a visit to the gym, then service and retail industries all around the country start to suffer.

This can be followed by layoffs at some of those outlets and even more cuts in discretionary spending as the laid-off workers tighten their belts.

China Locks Down 26 Million in Shanghai

A lot of the inflation today comes from the supply side, not the demand side. It has to do with supply chain disruptions and the cascade of consequences from the economic sanctions because of the war in Ukraine. None of these situations will show any improvement in the short run.

They may actually get worse, as the situation in China suggests…

China is currently experiencing a severe outbreak of COVID. The reason for this is China’s badly flawed and ineffective zero COVID policy. When a case does emerge, they immediately shut down the surrounding area, quarantine everyone, test everyone, trace any contacts and send the infected to isolation camps for two weeks or longer.

When an outbreak spreads, they will lock down entire cities and ban all transportation to or from that city. This is happening in Shanghai now. The entire city of 26 million has been shut down. Citizens are being ordered to stay inside. Visits outside for food and water are severely limited.

There’s nothing the Fed can do to stop the inflation because it’s coming from the supply side, which the Fed has no control over. Higher interest rates won’t increase the supply of oil. The Fed has no mandate to drill for oil or discover natural gas resources.

The Fed is essentially helpless.

A Drop (of Oil) in the Bucket

To help lower gas prices, Biden plans to release 1 million barrels of oil per day from the Strategic Petroleum Reserve. But that will accomplish nothing at all. Here’s why…

The U.S. uses about 20 million barrels of oil per day. So the 1 million barrel release from the reserve only adds about 5% to the supply. But it doesn’t really add anything to the supply because importers will simply reduce imports or domestic drillers will reduce output to equilibrate for the new oil.

There never was an oil shortage in the U.S., so adding a new source of oil doesn’t alleviate a shortage that never existed. It simply causes some oil to be redirected to other buyers.

Oil is a global market. The price is set mainly on futures exchanges in London and New York. Those markets focus on a wide variety of market variables of which the release from the reserve is only one.

In fact, global output is about 92 million barrels per day, so the U.S. reserve addition is only 1.08% of total output. That’s hardly enough to affect the world price one way or the other.

It’s also the case that U.S. refineries are not geared to process the type of oil in the reserve without significant modifications that take time. In short, the oil from the reserve does not convert easily to refined product and will have minimal impact on retail gas prices.

Finally, the Strategic Petroleum Reserve is meant to be strategic. It’s not a short-term price manipulation tool; it’s meant to give the U.S. a cushion in the event of a war or natural disaster that directly affects the U.S. itself.

The bottom line is there is practically only one way for the Fed to stop the inflation. That’s by raising rates until they cause a recession. It’s a fair question whether the cure (recession) is worse than the disease (inflation).

Since this is the incompetent Fed we’re talking about, we may even get both inflation and recession.