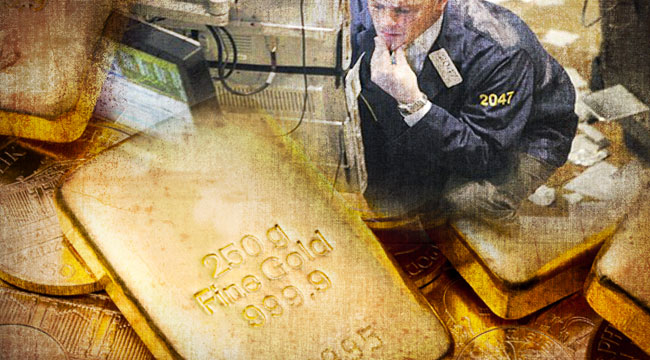 “Possession is nine-tenths of the law” — from a Scottish expression

It’s a Sunday night. October 2013. Parents are making sure the kids’ homework is done. Football fans are settling in for the night’s NFL matchup. Reigning champs, Baltimore, are about to lose. And all hell is breaking loose in the precious metals markets.

Moments before electronic trading opened at 6 p.m. EDT, Commodity Exchange Inc. — the Comex — announced it would settle a large gold contract in cash and not gold. To be blunt about it, the Comex has defaulted on its contract. Suddenly, everyone else with a gold contract — or a silver contract — started to wonder if they’d be next to get stiffed.

But on this day, buyers — desperate to get their hands on actual, physical metal because trust in the system is breaking down — have driven the price far above $2,000.

This is “zero hour” — the day you can mark on a calendar when the price of real metal breaks away forever from the quoted price on CNBC’s ticker. It’s the day you’ll be grateful you hold real metal and not a proxy like the GLD exchange-traded fund (ETF) (NYSE:GLD).

The Emperor’s New Clothes: Why Now Is the Worst Time to Give up on Gold

The “zero hour” scenario is the ultimate emperor-has-no-clothes moment. Hans Christian Andersen’s original 19th-century tale The Emperor’s New Clothes has become a 20th- and 21st-century touchstone for obvious truths overlooked by the masses. It is almost a cliche. But it is singularly appropriate for our purposes today.

The “emperor” here consists of central banks, commercial and investment banks and the commodities exchanges. The day everyone recognizes them as being buck naked — or in this case, stripped of the gold they claim to hold — will be “zero hour.” It’s the day you’ll be happy you held on, even as gold sank from $1,900 in September 2011 to less than $1,500 as we go to press.

You did hold on, didn’t you?

Caution: What we are projecting here is nearly the ultimate in fat-tail events. It is the product of deep research by one of the gold market’s most plugged-in luminaries… plus our own informed speculation.

But make no mistake: Zero hour — in the form of a precious metals default on the Comex, or maybe the London Bullion Market Association (LBMA) — is coming sooner or later.

“The odds of it happening are about 100%,” says Eric Sprott.

Mr. Sprott oversees $10 billion within the Canadian asset-management giant that bears his name. Among those assets is the Sprott Physical Gold Trust (NYSE:PHYS) — our recommended vehicle if you choose to keep a portion of your gold holdings in a brokerage account. To understand why it’s a certainty is to go deep down the rabbit hole… into the vaults of the world’s central banks. Sit tight…

12 Years and Counting: Demand Runs Away From Supply

We don’t want to make it sound more complicated than it is. At root, zero hour will come when everyone knows gold supply can no longer meet gold demand.

“When I look at the physical data that I can see in gold,” Sprott told us in a recent interview, “the gold market has not changed its supply fundamentals in 12 years. It’s flat.” Add up supply from new mines and recycled scrap gold — mostly old jewelry — and the World Gold Council reckons it’s rock-steady at about 3,700 tonnes (metric tons) per year.

And what about demand? Since gold began its bull run in 2000, scads of new demand sources have come into the picture.

“The mere combination of only five separate sources of demand,” Sprott writes in a recent white paper, “results in a 2,268-tonne net change in physical demand for gold over the past 12 years — meaning that there is roughly 2,268 tonnes of new annual demand today that didn’t exist 12 years ago,” when supply and demand were more or less in balance. 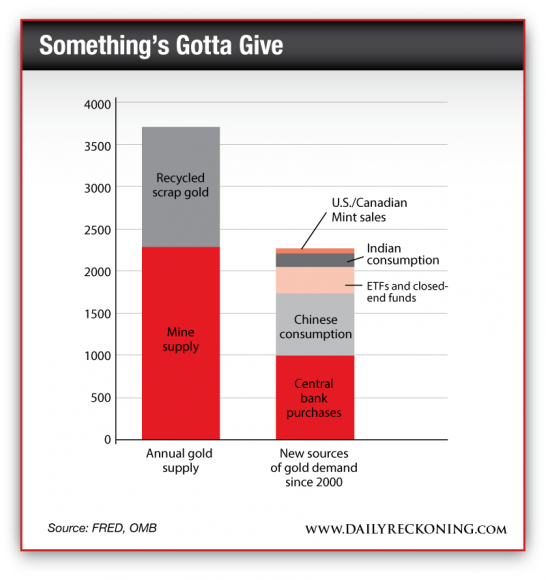 And those are only the official figures. “There are lots of other purchasers of gold that I don’t have records of,” he elaborated in our interview.

“So for example, when somebody physically buys a gold bar, whether it’s [hedge fund manager] David Einhorn or the University of Texas endowment or someone like that, there’s no place that I can go and see how many bars were purchased. There’s no public documentation if Russian billionaires are buying gold.” For every story that makes the news, like Einhorn or UT, there might be 10 purchases that occur sub rosa.

Summing up, nearly 2,300 tonnes (officially) of new demand each year are coming into a market where supply is still stuck at roughly 3,700 tonnes. “So where’s the gold coming from?” Mr. Sprott asks rhetorically. “Who’s supplying this gold?”

After a research project that’s gone on as long as the bull market in gold, he’s left with only one plausible explanation — the one that makes default on a major commodity exchange inevitable.

“The Western central banks,” he tells us, “are surreptitiously supplying gold by leasing theirs out.”

True… but all the buying has come from developing countries like Russia, China, India and Kazakhstan.

Meanwhile, the numbers from the big developed countries — the U.S. included — have been static.

Remember the main reason central banks are in business — to benefit their biggest and most powerful member banks.

And what’s beneficial to U.S. and European banks is gold leasing. Commercial and investment banks lease gold from a central bank at bargain rates — usually less than 1% a year. Then they sell that gold into the private market and plow the proceeds into… well, anything that yields more than 1%. It’s a sweet deal if you’re a banker.

“But then the gold is gone, right?” Yes. If the central bank wants its gold back from the commercial and investment banks, those banks would have to buy gold on the open market — driving up the price. That’s a bad deal if you’re a banker.

So usually, there’s a tacit understanding: Central banks don’t ask for their gold back, and the commercial and investment banks roll over their gold leases. As long as they’re earning more than 1%, the debt service is easy peasy.

But if a central bank asks for its gold back, it’s game over.

“They can get away with [the leasing],” Sprott explains, “because on their financial statements, the one line they have for gold says ‘gold and gold receivables.’ A receivable is not real gold, physical gold… and we don’t get a breakdown between the receivables and the physical. They’ve not provided that.”

Look below and you can see the guile central bankers use to concede their gold “holdings” is not limited to bars in a vault. 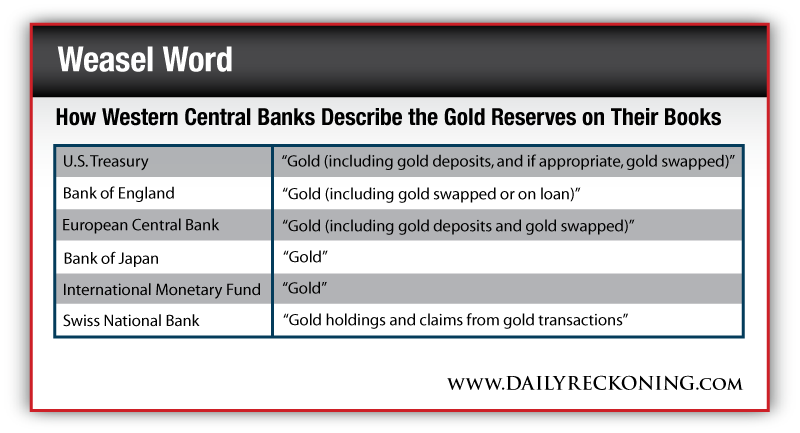 “It would not lend much credence to central bank credibility,” Sprott writes, “if they admitted they were leasing their gold reserves to ‘bullion bank’ intermediaries who were then turning around and selling their gold to China, for example.

“But the numbers strongly suggest that that is exactly what has happened. The central banks’ gold is likely gone, and the bullion banks that sold it have no realistic chance of getting it back.”

Add it all up and we’re getting much closer to zero hour.

[Ed. Note: Did you know you can get the Daily Reckoning delivered directly to your email inbox every day around 4PM? And it’s a completely free! Not only that, but subscribers are also offered unique opportunities at life-changing wealth, some of which you won’t find anywhere else. If you haven’t already done so, you can sign of for free, right here.]