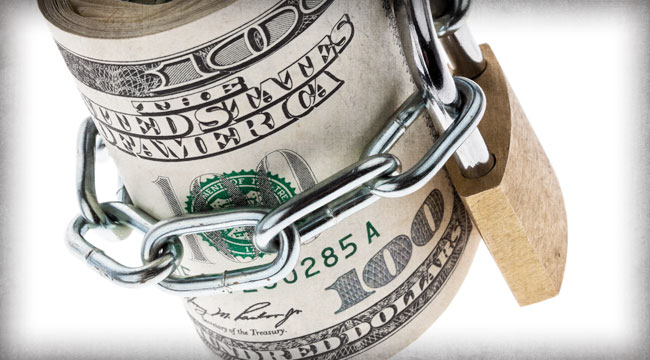 The US Debt Crisis that Will Never Happen

I firmly believe that there’s not going to be a debt crisis here in the U.S.

I was skimming through Barron’s over the weekend and I saw Gene Epstein’s column titled “New Warning on U.S.’ Gathering Debt Storm.” He writes about the Congressional Budget Office’s new report, released Tuesday.

There are some real whoppers in there.

Before I get to those, I want to say that it helps to separate your politics from reality.

You might not like the U.S. government’s debt total. But you should understand how it works. If nothing else, it will prevent you from believing the silly things people say about government debt.

There is zero chance that the U.S. has a fiscal crisis like Greece…

If you’re going to invest, you want as clear a picture as possible of reality. Seems self-evident, but I put it out there anyway.

So Epstein writes, “Why take the problem of soaring government debt and deficits so seriously?” He then goes through some reasons, all of which are perfectly ridiculous.

Here’s one, in which he quotes the CBO:

“There is the danger of a fiscal crisis a la Greece and Argentina, based on the ‘greater risk that investors would become unwilling to finance the government’s borrowing needs unless they were compensated with very high interest rates.’”

There is zero chance that the U.S. has a fiscal crisis like Greece, for example.

Greece collects taxes in euros, spends in euros and borrows in euros. Greece, however, does not create euros. Only the European Central Bank can do that. So Greece actually does have to get euros before it can spend them. It can have (and did have) a genuine fiscal crisis.

There is an economist, Scott Fullwiler, who explained this in a post at the New Economic Perspectives blog site:

“A currency-issuing government under flexible exchange rates can’t have such crises, because it doesn’t need to borrow its money; interest rates on its debt are a monetary policy variable. The doomsayers have been at this for decades now, but have not explained why the U.S., U.K. and Japan ran continually large deficits starting in 2008 at low interest rates while Greece, Spain, Italy, etc., could not… At some point, one would think the ‘U.S. could become Greece’ argument would be widely recognized as fraudulent, but if you’re in the wrong paradigm, it’s difficult to accept even a simple explanation of why the paradigm is wrong.”

Hopefully, you can accept a simple explanation.

It’s true there are constraints. For example, there’s the debt ceiling. But this is a self-imposed restriction.

There is no reason why the U.S. should have a fiscal crisis of any sort. Such a crisis could only be self-imposed. So the real risk is that policymakers don’t understand how their own fiat currency works. The real risk is that they listen to the CBO.

In truth, the U.S. government is not beholden to investors at all. It can set the rate on its debt wherever it wants by having the central bank stand ready to buy government debt at the price. The central bank could buy it all back. The government creates money out of thin air, so it can never run out. It doesn’t need to borrow at all.

Note how Epstein adds ominously to that quote above, writing that the danger of a fiscal crisis “could be magnified by the fact that nearly half of U.S. Treasury debt is in foreign hands.” As if the U.S. were somehow beholden to, say, the Chinese.

Again, the U.S. government creates dollars. Not the Chinese. Who holds the debt is irrelevant to U.S. solvency.

But there is more. Epstein, citing the CBO report, puts out another reason to worry about U.S. government deficits:

“For one thing, there is the crowding-out effect. ‘Increased government borrowing,’ the CBO explains, ‘would cause a larger share of the savings potentially available for investment to be used for purchasing government securities.’”

This is not possible, because banks create loans out of thin air. The banking system is not constrained in any way by savings. Banks don’t lend savings. Savings are not required to invest.

Let me cite Fullwiler again, who knows the plumbing better than anyone I know. Here he is responding to the CBO’s crowding-out argument:

“This would be laughable if it weren’t for the fact that most economists believe it and the dangers of following policy based on such a belief. The analysis is based on the loanable funds market — which DOES NOT EXIST in the real world. In reality, the funds that banks lend are created out of thin air, not constrained by saving, the flow of deposits or fractional reserve requirements… So there is no threat to funding available for private investment in capital goods, and no threat to the growth rate of future national income. CBO’s analysis is simply inconsistent with how the modern financial system actually works.”

OK, so that’s that. Government borrowing in no way restricts funding available for private investment.

However, it is possible to have insufficient real resources to satisfy demand at any point in time. You certainly can have government spending for steel, to take an example, drive up the demand and prices for steel. That’s not what Epstein and the CBO are worrying about. They’re worried about funding, and that kind of financial crowding out is not possible.

There is one more fallacy I want to mention. Here is Epstein again:

“Then there is the reduced ability to use deficit financing as a policy instrument. As the agency explains, ‘When federal debt was below 40% of GDP, the government had some flexibility to respond to the financial crisis and severe recession by increasing spending and cutting taxes.’ Not so when the debt is 140% of gross domestic product.”

This is just pure nonsense. There is nothing magical about the debt-to-GDP ratio or any thresholds based on it. The U.S. government has the same ability to use deficit financing at 140% of GDP just easily as it does at 40%. Just remember: The government creates money.

Now, I’m not saying the government should create money and spend however it wants or that doing so is a good thing. That’s why I started up top by saying it helps to separate your politics from reality. I believe society would be better off abiding by the principles of voluntary association, self-organization and mutual aid. But my politics don’t change the realities of the monetary system we have now.

If you don’t get the realities, then you invest foolishly. If you believe Epstein is right, then you’ll likely miss out on all kinds of great investment ideas because you’ll be afraid of a looming debt crisis. Instead, you’ll put your money in junky gold stocks — as if that will protect you!

There is no debt crisis, nor will there be one — unless people start believing in the imaginary world of Epstein and the CBO. I suppose one can never rule out, as the old legal phrase has it, a felo de se — an act of self-destruction.

P.S. This essay was first featured in today’s Daily Reckoning email edition. In addition there was a full analysis on the top five states to live in to ride out a potential fiscal crisis on the federal level. It’s just one of the many free perks of being subscriber to The DR. Sign up for FREE right here, and get a host of great benefits, including regular opportunities at real, actionable investment tips.

Fake news about the vaccines… How many lives could cheap, effective therapeutics have saved if they were allowed to be used?…