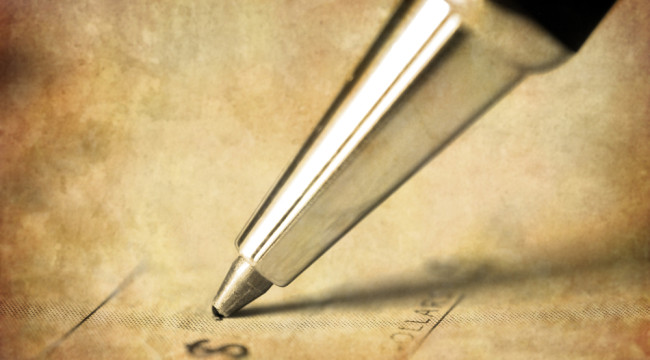 The U.S. Will Never Say Default

“The United States will never default on its debt,” says former Comptroller General and I.O.U.S.A. protagonist David Walker. “The Treasury can and should prioritize its debt service payments.”

We’re delighted to see Mr. Walker affirm something we’ve hammered at since at least the first of the year. Even if the Treasury hits the debt ceiling, it will have no problem continuing to pay interest on the national debt.

“The Bureau of Public Debt knows who’s owed what, when,” Mr. Walker tells CNBC. “And we have plenty of cash flow to meet those debt service obligations.”

It’s Uncle Sam’s other various and sundry obligations that would have to give way. At the risk of repeating ourselves further: To stay under the debt ceiling would require, in effect, an instant balanced budget so that no more additional debt accrues.

It isn’t that hard to get from here to there. As we noted yesterday, the “partial government shutdown” already amounts to a 17% cut in government spending — or $626 billion if it lasted for all of fiscal year 2014.

The White House’s 2014 budget request projects a deficit of $744 billion. Really, how hard would it be to scare up another $122 billion in savings?

The problem is Wall Street won’t stand for that.

“In recent meetings with Republican lawmakers and Obama administration officials,” reports this morning’s Wall Street Journal, “chief executives of the nation’s largest financial institutions said putting some payments ahead of others would create insurmountable uncertainty for investors, drive up borrowing costs and cause market disruptions, according to people familiar with the meetings.”

Says Tom Simons, an economist at investment bank Jefferies Group: “This is going to be permanently damaging for business and consumer confidence if this happens. People will never look at the United States Treasury the same ever again.”

Hmmm… He says that as if it’s a bad thing…

“I think most people sort of knew that the shutdown business was the undercard to the main event,” says our Chris Mayer — “which is the debt ceiling issue.

“It’s rare that any sovereign in our paper-money age defaults for obvious reasons. It’s hard to run out of money when you can print what you want and people who hold the debts you owe have to take it.

“I think we can rule out the idea that whatever resolution comes out of this is going to fix anything. The U.S. government will still be deeply in the red. It will still have a growing pile of debts. And the value of the U.S. dollar will likely continue to crumble like a sand castle worn away by wind and an incoming tide.

“In other words, expect more of the same. Meanwhile, markets will go up and markets will go down. People are still people — and they have a tendency to misprice securities. There is always something to do, as the great investor Peter Cundill used to say.”

Dave Gonigam,
for The Daily Reckoning

P.S. One of the best ways to keep track of the market volatility that Chris mentions is by subscribing to The Daily Reckoning. That way, you get premium daily market updates and commentary that we just don’t post to the site. To sign up, simply click here.

With today being the first weekday the government is officially shut down, Zach Scheidt gives you a one-stop guide on everything you need to know…