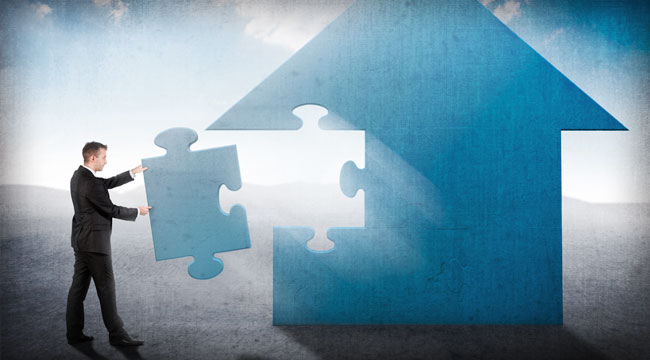 Oh no! Here we go again. According to a recent Gallup poll, Americans once again think real estate is a good investment. Real estate was favored over stocks, bonds, savings accounts, and precious metals. The survey suggests that 30% of those polled view real estate as the best investment, which is well up from 19% in 2011. In fact, the results of this same poll show that gold was the favored investment in 2011. Care to guess when gold made its high? It was in September of 2011. Ironically, bonds were the least favored investment in 2011 despite persistent gains that continued into 2012. What gives? Why is the public so confident in real estate? Was there no lesson learned from the precipitous fall in home prices? 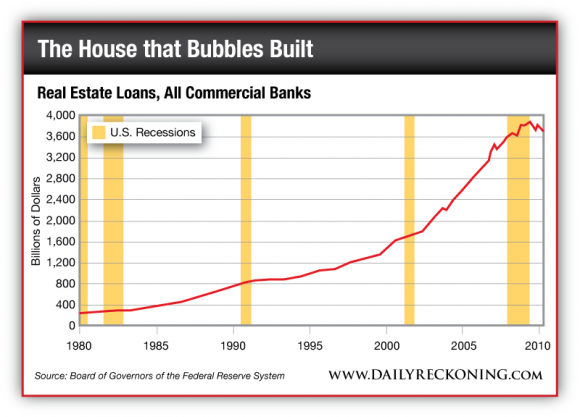 I suspect that a great deal of the loan growth was classic consumption real estate (the roof over people’s heads).

For the real estate market, creditors greatly relaxed the rules used to extend loans. The underwriting standards weakened and gave rise to “ninja” loans (no job no income). For those not acquiring new loans it meant using their home as an ATM machine to finance other consumption items such as appliances, vacations and recreational vehicles. This case was particularly toxic since consumption credit financed consumption credit – a double whammy of debt exposure.

The condition described here is a seminal example of my first Economic Law (CREDIT = CONFIDENCE). The abundance of confidence blurred the calculations of the housing market. Neither creditor nor homeowner accounted for the larger load that would stress the system. That larger load, of course, was the end of the credit bubble and a fall in housing prices. Had engineers designed buildings and bridges the way loans were issued, we would have big piles of rubble everywhere. Some evidence of the real estate rubble can be seen in the next chart. 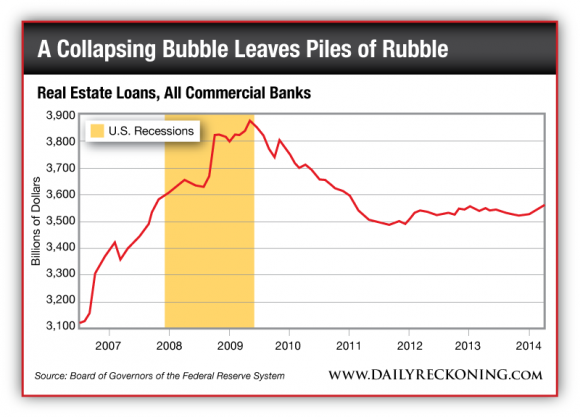 After peaking in early 2009, commercial loans fell into late 2011. Remember what I said earlier about 2011 being a low point for the public’s view of real estate as an investment. The real estate rubble became very evident that year. Prices began their upward flight afterwards. Notice, however, that loan growth in the commercial banking sector seems relatively tepid since 2011. This seems a contradiction. Prices increased despite no appreciable uptick in new loans. The contradiction will be clarified shortly.

Another troubling condition, is that despite the price appreciation since 2011, the number of homes underwater remains disturbingly high. According to a report by Zillow, there are nearly 10 million homes underwater. A similar number have such little equity that, for all intents and purposes, they might as well be underwater. So that is some 20 million homes that are locked in place. Their occupants are not likely to participate in home purchases since they are financially unable to move. First time homeowners have seen their supply of potential homes choked since much of this inventory consists of those units that are underwater. So while a city like Las Vegas has seen a healthy rise in prices since the bottom, about a third of that city’s homes remain underwater.

Looking at a broader view of the real estate market, the Case-Shiller 20-city index peaked in 2006, some three years before the peak in real estate lending. In January of this year it remained 20% below this peak. You should view the price recovery through a different set of lenses. Much of the recovery is occurring via cash purchases. This seems logical given the earlier chart showing tepid real estate loan growth. If prices are rising and loan growth is weak, it stands to reason that cash transactions are a larger piece of the action. Cash transactions, in this market, means private investors.

Earlier I contrasted consumption real estate from investment real estate. Consumption real estate equals the roof over your head. Investment real estate does not necessarily mean the owner is also the occupier. The owner occupier has an emotional attachment to the roof over their head – not so for the investor. Investors can and will run at the first sign of trouble, unlike an owner occupier who may be underwater. Thus, there is a more volatile component tied to recent home purchases and their corresponding price rises.

Regulatory restraint for lenders is also hastening the distortions. The Dodd-Frank financial overhaul act increased the litigation risk for lenders who now must abide by a regulation to only make loans to borrowers who can repay. This is good in theory but no doubt harder to implement. Bad debt is part of any business even during good times. Unfortunately government tends to act, sometimes in draconian fashion, after a crisis. This regulatory burden is no doubt creating some distortions in the market by fostering more all-cash transactions.

The housing market is in many respects in a more tenuous position than it was near the peak in 2006. At least in that year, there were significantly fewer homes underwater.

The market is heavily reliant on government sponsored entities like Fannie Mae and Freddie Mac. What would housing prices be without their massive support? Cash investors are looking to make a quick buck. Millions of homeowners cannot afford to move up or down. Federal Reserve interventions keeps bank CD rates microscopically low. The investor mindset has been unwittingly ushered in a more risky direction to the point where housing is viewed as an investment once again.

Ed. Note: Whether or not the U.S. housing market experiences a true recovery remains to be seen. But as long as shows like House Flippers stay on the air, it’s probably not a good sign. House prices may go up, but that doesn’t mean people will be able to afford to live in them. Of course, regardless of how this plays out, you can keep yourself informed and ahead of the curve, simply by signing up for the FREE Daily Reckoning email edition. Once inside, you’ll gain exclusive access to the Daily Reckoning Research Library, which is full of useful free reports on everything from economic bubbles to Obamacare to newest “Trade of the Decade.” So don’t wait. Sign up for FREE, right here, and start getting the most out of The Daily Reckoning.

The Echo Housing Bubble Could Be About to Burst

Charles Hugh Smith reports on the speculative housing market bubbles, and what will happen when they are followed by an echo bubble…