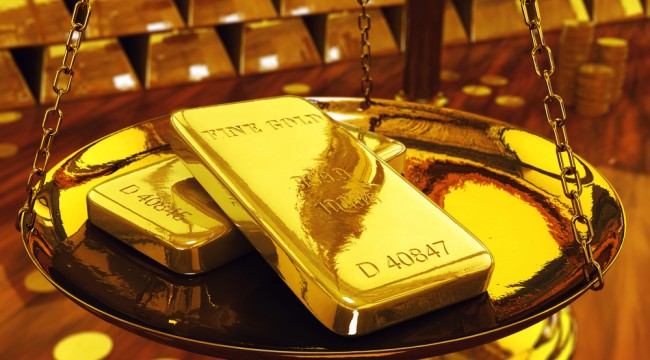 The True Value of Gold

The Daily Reckoning: Let’s dive right into the price of gold. Gold had a rough year in 2013 — hitting a low of $1,178. Are you surprised by gold’s recent performance?

Paul van Eeden: No, I’m not surprised at all. I think even at $1,230 gold is still expensive. And it wouldn’t surprise me in the least to see gold go down another few hundred dollars. But I have to be very careful because I don’t try to predict what the price of gold is going to do in the next six months or a year. I pay attention to what I think gold is worth, because if the price is higher than what I think it’s worth, then I have very little interest in buying gold specifically. If it trades for less than what I think it’s worth, then I’m more inclined to buy it — without paying attention to the timing. I don’t mind buying assets if they’re trading below intrinsic value and holding onto them; I don’t mind buying more if they continue to decline. But I try not to buy assets when they’re trading for more than what I think they’re worth, regardless of what I think is going to happen in the next three-six months.

The Daily Reckoning: Building on that, how, exactly, do you figure out what gold’s intrinsic value is?

Paul van Eeden: The basic premise is the fact I think gold is money. And I analyze it as if it’s money. Whenever you talk about the price of something, whether it’s gold, or a Mercedes-Benz, or a widget — it doesn’t matter what you’re talking about — the minute that you denote something as a price, then you’re making a comparison between two different things. You’re comparing a Mercedes against a bunch of U.S. dollars. The minute that you express something as a price, you’re analyzing two things.

The minute you start talking about the gold price, it means you also have to understand what you’re pricing it in. In this case, most people price it in U.S. dollars. So you cannot start an analysis of gold without first analyzing the U.S. dollar. So I’ve spent a lot of time and effort trying to figure out how the dollar’s intrinsic value changes over time.

My own view is that a currency’s intrinsic value declines proportional to its inflation rate. We have to be very careful here because a lot of people, when you talk about inflation, think about price changes — or price inflation. When I talk about inflation, I’m talking about monetary inflation, changes in the money supply. So my belief is that a currency’s intrinsic value declines in proportion to an increase in the money supply.

If gold is money, then its intrinsic value will decline as the supply of gold increases. So you have to know what the U.S. money supply is and how does it change from year to year. You also need to know what is the gold supply, and how does that change from year to year. So by looking at the change in the U.S. money supply and the change in the gold supply over the last 100 years, I’ve come up with a chart that gives me the change in the intrinsic value of gold vis-a-vis the U.S. dollar over the last 100 years, purely and simply as a result of the relative inflation rates of the two currencies. 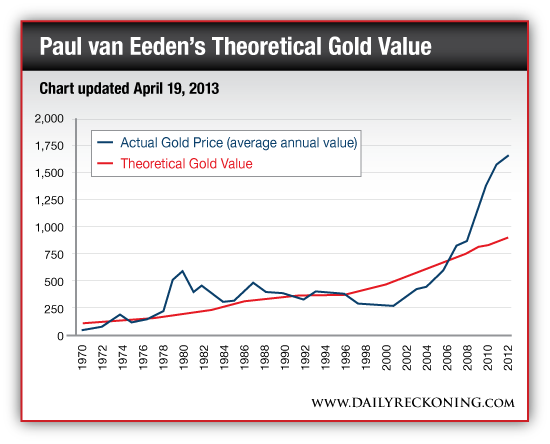 And based on that, I think gold’s probably worth about $1,000 an ounce right now in U.S. dollars.

The Daily Reckoning: Do you think that gold will, in fact, decline to that level?

What I do know is if I think it’s worth $1,000, I’m not going to buy it when it’s $1,200 an ounce. If the gold price declines below $1,000 an ounce, I’ll be inclined to buy some — not because I think it’s going to go up, but because I think it is underpriced. If gold continues to decline, I’ll buy more, again without any consideration for when the price of gold is going to go up, merely as a function of the fact I think the value of gold vis-a-vis the dollar goes up steadily from year to year.

And let’s say in theory, hypothetically, it goes up by, say, 4-6% a year. Let’s average that out and say every year it goes up about 5%. Well, if I can buy gold at a 10% discount to its value and it increases at 5% a year, and I keep holding it, eventually I’m going to be doing OK. But if I buy it at a premium to what I think it’s worth, even if it continues to appreciate in value against the dollar, I might actually lose money, depending on how large that premium is.

The Daily Reckoning: That’s an important distinction. Finally, to wrap up… would you explain what measure of the money supply you use for our readers? You call it the “Actual Money Supply,” correct?

Paul van Eeden: Yes, my measure of money supply is very simple. It’s the actual amount of money that’s in the economy and available to the economy. So in other words, it’s notes and coins. We all use notes and coins, all the money supply measures use notes and coins. It includes all of your bank account deposits — your checking account, your savings account, your term deposit account. I’ve never met anybody who believes the money they have in their savings account isn’t money or isn’t theirs or they cannot spend it. Similarly with term deposits. So I count all those things. But I don’t count anything else. I don’t count money market mutual funds, I don’t count other financial instruments, because they’re not money, they’re assets. And most other measures of money supply include items that are not money, but are assets.

The Daily Reckoning: Thanks very much, Paul. That’s a good place to stop today.

Ed. Note: Today’s Daily Reckoning email edition gave readers a chance to get Paul van Eeden’s full take on gold in 2014… and pretty nice way to profit, to boot. If you didn’t get it, not to worry. Tomorrow’s issue will be packed full of more great opportunities just like this one. So don’t wait. Sign up for FREE, right here.

Paul van Eeden is president of private holding and investment company Cranberry Capital Inc., and is well known for his work on the relationship between the price of gold and currency markets. Originally from South Africa, and having been intimately involved in the financing and evaluation of resource companies, he has an insider’s understanding of mineral exploration. Van Eeden is a frequent speaker at investment conferences and a regular guest on radio and television.