“Borrowing our way out of debt” generates the three D’s of Doom: debt leads to default which ushers in depression.

Let’s start by defining economic depression: a depression is a recession that isn’t fixed by conventional fiscal and monetary stimulus.

In other words, when a recession drags on despite massive fiscal and monetary stimulus being thrown into the economy, then the stimulus-resistant stagnation is called a depression.

Here’s why we’re heading into a Depression: debt exhaustion. As the charts below illustrate, the U.S. (and global) economy has only “grown” in the 21st century by expanding debt roughly four times faster than GDP or earned income.

Costs for big-ticket essentials such as housing, healthcare and government services are soaring while wages stagnate or decline in purchasing power.

What’s purchasing power? Rather than get caught in the endless thicket of defining inflation, ask yourself this: how much of X does one hour of labor buy now compared to 20 years ago?

Our earnings are buying less of every big-ticket expense that’s essential, and we’ve covered the gigantic hole in our budget with debt. The only way the status quo could continue conjuring an illusion of “prosperity” is by borrowing fantastic sums of money, all to be paid with future earnings and taxes.

When wages are stagnant and big-ticket items are soaring in cost, that leaves less available to service more debt. We can cover expenses by borrowing more for a while, but there’s an endgame to this trick: even at zero interest, servicing the debt exceeds income.

In other words, defaults are not cost free. They wipe out assets and income streams, never to return.

For the past 20 years, the trick to escaping recessions has been to lower interest rates and flood the financial system with new credit. If everyone would just borrow more and spend every cent of the new money, the economy will start “growing” again.

But we’ve reached the point where most wage earners can’t borrow more, corporations shouldn’t borrow more and the top tier of earners no longer want to borrow more. Governments can always borrow more, but eventually servicing the ballooning debt starts crowding out other spending, and the solution—borrowing more to cover the interest payments — spirals out of control.

Borrowing more to fill the hole left by declining purchasing power only works in the short-term. We’ve burned the 20 years that this trickery can work, and now we face the endgame: borrowing more only increases defaults, which trigger losses in wealth and income that will be measured in the trillions.

Take a look at systemwide debt in the U.S. Does this look remotely sustainable? If the answer is yes, you might want to dial back your Ibogaine consumption. 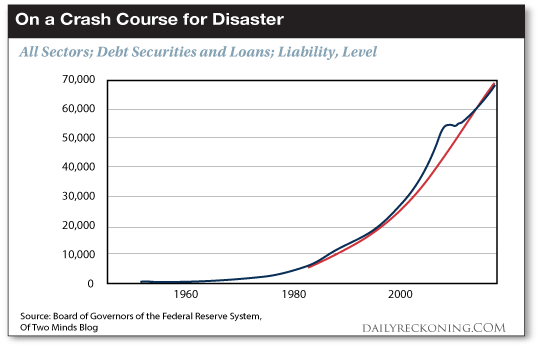 Then there’s student loans. One trillion here and one trillion there, and pretty soon you’re talking about entire generations of debt-serfs and a bunch of pension funds that are going to suffer catastrophic losses when the student borrowers default.

“Borrowing our way out of debt” generates the three D’s of Doom: debt leads to default which ushers in depression.

Which brings us to the Fed, and “Wile E. Coyote.”

Wile E. Coyote and the Federal Reserve share a lot of similarities.

Wile E. Coyote’s schemes are ingenious, if overly complicated, and it’s not his fault that the Acme detonator misfires or the Road Runner doesn’t respond as predicted.

Every set-up to nail the Road Runner should work. That it fails and leaves him suspended over the cliff for a woefully brief second to intuit his impending doom really isn’t his fault.

Just as Wile is always trying to catch the Road Runner, the Federal Reserve and other central banks have been trying for 10 years to trigger a self-sustaining economic expansion, i.e. an expansion based on the self-reinforcing dynamics of increasing productivity driving increasing wages which then fuel consumption and investment in productivity, and so on.

In a self-sustaining expansion based on fundamentals, central banks can “normalize” (raise) interest rates relatively painlessly to levels that are at least 3% above official inflation, so pension funds and other institutions that need low-risk yields can survive.

Official inflation in the U.S. is about 3% (real-world inflation is running between 8% and 13% in urban America, as per the Chapwood Index, but that’s another essay), so the Fed Funds Rate should be at 6% minimum, which would set mortgages and other long-term loans at 7% or so.

But all the central banks’ intricate plans have failed, and so they are having a Wile E. Coyote moment of impending doom.

The Acme Brand detonator they counted on — negative interest rates — has failed to spark a self-sustaining expansion, and all the Fed’s convoluted schemes — Operation Twist, buying a trillion dollars in sketchy home mortgages, etc. — failed to catch the prize.

And so the Fed was only able to raise rates, more or less at the last minute, by 2% — a pathetic admission that even after a decade of central bank-dependent expansion, the Fed couldn’t even raise rates into positive territory, i.e. above the official rate of inflation.

While the other central banks are falling into the abyss, the Fed is clinging to the edge of the cliff by its fingertips.

Having failed to spark a self-sustaining expansion, now the Fed is left with two dismal choices: either let go and fall into the abyss of negative interest rates — doing more of what’s failed miserably — or cling on and keep rates at 2% so there’s some policy response left when the global recession inevitably washes up on America’s shores.

Whatever the Fed chooses to do, it’s already failed. The Road Runner of self-sustaining expansion got clean away, and the Fed is left holding the ominously ticking Acme Brand detonator.