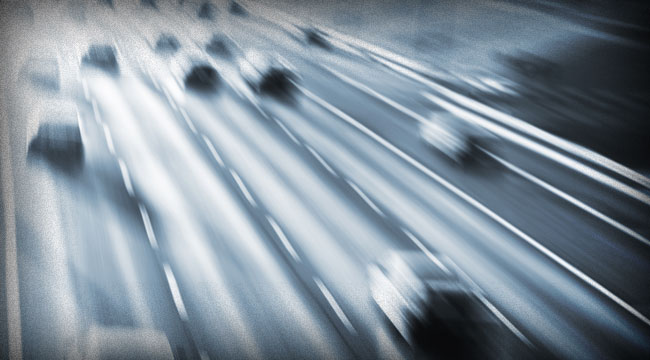 The Terminal Velocity of Money

Inflation has been such a constant companion of the global economy that we automatically assume it will always be so. We have known nothing else…unless of course you were an adult through the Great Depression. When the Fed embarked on QE to Infinity, the automatic assumption was that higher inflation or even hyperinflation would be the consequence of this policy.

However, around April 2011 commodity prices began to fall. What’s interesting about this is QE3 ($85 Billion per month asset purchases) began in late 2012, yet commodity prices have not recovered the ground lost since April 2011. Something else is going on in the global economy. 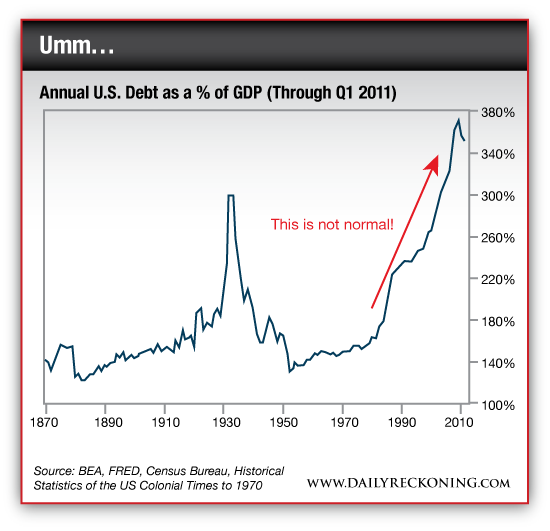 Credit is an advance on tomorrow’s income. There is simply not enough income in the system to repay the debts accrued over the past 30 years.

What we have from the private sector is a slow leak in the credit bubble. The global economy inflated on credit and it will deflate on the contraction of credit (whether that contraction is voluntary or involuntary). One way or another the debt has to leave the system…just like it did from 1930 to 1950.

The easier way would have been to allow the Great Financial Crisis to fully express itself. The harder way is for the authorities to stand in the path of the Great Credit Contraction with their various boondoggles. Like it or not we are on the harder path.

To give you some perspective on the pain that awaits us, look at this next chart from FRED on the total credit in the US economy. Look where it was in 1980 compared to today…from $5 trillion to $60 trillion 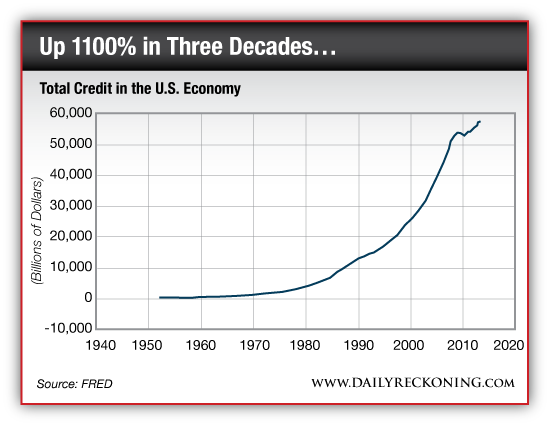 That is not the biggest issue of this graph. Look at the little blip downwards in the grey shaded area of 2009. This little blip was the Great Financial Crisis.

The reversal of this blip is courtesy of government debt. The point I am making is if this little tick downwards put the skids under the global economy in 2008/09, what is going to happen if and when debt levels reset back to 130% of GDP (as they did in 1950)?

To put this into perspective, US GDP of $17 trillion x 130% = $22 trillion in credit. Now, mentally trace the thin blue line down to $22 trillion and see the extent of the fall the Great Credit Contraction may have in store for us. It makes the 2008/09 blip look like a pimple on an elephant’s behind.

This amount of credit leaving the system (by repayment, default or restructure) is deflationary. The other option to achieve a debt to GDP ratio of 130% is for GDP to rise (due to higher inflation) and for debt levels to stay the same.

OK it is possible, but what happens to an economy where debt levels stagnate for a decade and interest costs (due to higher inflation) are three to four times higher than US borrowers are paying today?

I do not pretend to know all the unintended consequences of these effects; suffice to say it would not be pretty.

No matter which way we slice or dice it, the system has too much lead in its saddlebags. Either we get rid of some of the lead or get a bigger horse. I’m leaning towards the ‘lead reduction’ option.

The GDP of an economy is the equation of:

To simplify this equation, let’s say you and I are the only two people in the economy. You have $100 and I have nothing. You pay me $100 for a good or service.

The velocity of money is 2 (once to me and once to you).

Again courtesy of FRED, here is the US M2 Money Stock. Since the financial crisis, US money stock has increased by $4 trillion (from $7 trillion to $11 trillion).

This is what the inflationists are concerned about…more money in the system. Similar to the rampant money printing in the Weimar Republic and Zimbabwe, which resulted in hyperinflation. 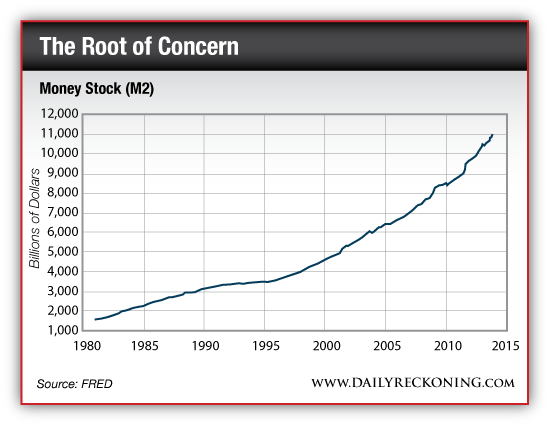 However, there are two parts to inflation – money supply and credit growth. The Great Credit Contraction is slowly but surely shrinking the private sector debt pile. So credit growth is not stoking the inflationary fire. This is evident from the steep decline in Velocity of M2. 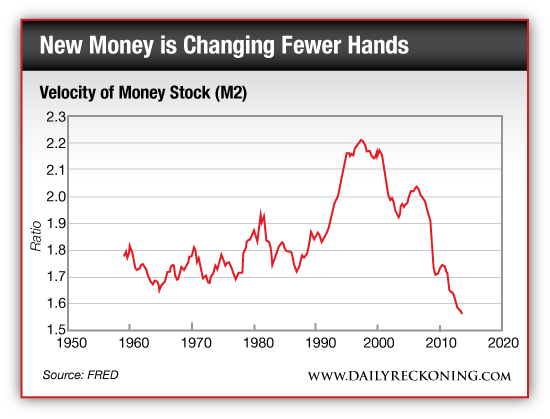 The additional money is not changing hands as quickly as it used to – the Fed and banks are stockpiling it.

Based on these charts here is the equation for the US economy:

So here’s how inflation could happen. As mentioned above, everything is ‘mean-reverting’. If Velocity of money mean-reverts to the 1.7 to 1.8 range and the Money Stock keeps rising (which sure looks like it is going to be the case), then the US economy will easily leap into the $20+ trillion level.

Given the Fed’s gross incompetence behind the wheel of the economy, it is not too much of a stretch to see the economy being whipsawed from deflation to inflation.

In the pursuit of economic growth at all costs, the authorities over the past three decades have created a monster. Which way this monster will unleash its fury is an unknown. However the one thing I am reasonably certain of (due to the precedent of history) is that the monster will break the central bankers’ flimsy shackles. When it does, we will see whether its destructive power is deflationary or inflationary.

As I said earlier, my guess (and that is all anyone can do in these uncertain times) is on deflation.

Ed. Note: All guessing aside, the US cannot continue its current course indefinitely. That much is certain. What will happen when the debts come due? Who will be forced to pay? And most importantly… Will you be prepared? These are the most important questions we face today. And if you don’t know the answers (especially to that last one), you’ll need to take steps to ensure you’re ready, no matter what happens. That’s where readers of The Daily Reckoning already have a leg-up. Every single day, Daily Reckoning readers are given no less than 4 chances to discover real, actionable investment opportunities that can help secure their wealth as the current financial drama plays out. And it’s completely FREE to sign up. What do you have to lose? Sign up for the FREE Daily Reckoning email edition, right here, and stay ahead of the curve.