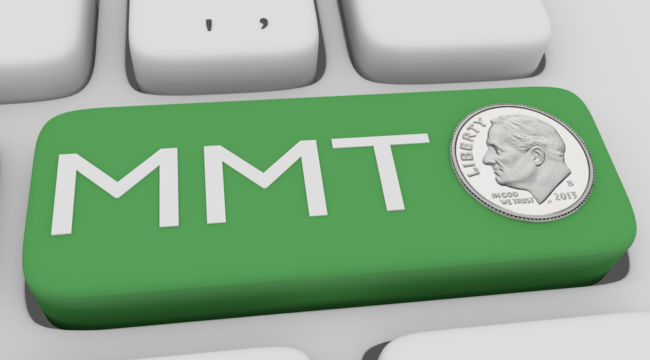 The Superstition of Modern Monetary Theory

One thing you can count on is that elites never accept responsibility for their own failures. It’s always someone else’s fault if their policies don’t work.

Raghuram Rajan is one of the top global monetary elites. He’s a professor at the University of Chicago and at various times has served as governor of the Reserve Bank of India and in senior capacities at the IMF and Bank for International Settlements.

He’s what the top elites call “a safe pair of hands,” which means he can be appointed to any one of a number of top positions with no fear of him rocking the boat with unconventional views.

He just wrote a new article on the role of central banks in the economic recovery since 2009. Guess what?

According to Rajan, the central banks have done everything right and fiscal authorities are to blame for weak growth, below-target inflation and other maladies from the weakest economic expansion in over 60 years.

He’s got it backward.

But they’re not. We all know the outlines of how the Fed and other central banks responded to the financial crisis in 2008. This extravaganza of zero rates, guarantees, swaps and money printing worked to ease the panic and prop up the financial system.

But it did nothing to restore growth to its long-term trend, solve the steady accumulation of unsustainable debt or improve personal income at a pace that usually occurs in an economic expansion.

And right now, many believe the global economy is already in recession right now. Even if it isn’t, it could be close.

As Reuters reports, global industrial output, new orders, business investment, construction activity, motor vehicle production and freight volumes are flat or down over the past year. So the signs aren’t encouraging.

If a decade of central bank policies have done little to improve the real economy, why should anyone expect anything different going forward?

If anything, central banks should have their powers curtailed and their independence limited. Incompetence has a cost, and in the case of central banks that cost involves exposure of their smoke screen around failure in economic management.

Central banks are really good for one thing only: being lenders of last resort. All other goals should be repealed. Better yet, maybe we should get rid of central banks entirely.

That may be the direction in which things are heading anyway. Central banks themselves risk being discredited.

They don’t have nearly enough “dry powder” saved up to fight the next recession, which may be impossible to get out of. When they fail, it’ll become obvious that the emperor has no clothes.

This theory says that the U.S. can directly stimulate the economy and pay for a raft of new social spending. Unlike quantitative easing, which mostly enriched Wall Street, MMT would help real Americans.

The government can spend as much as it wants and run the deficit as high as it wants because the Fed can monetize any Treasury debt by printing money and holding the debt on its balance sheet until maturity, at which time it can be rolled over with new debt.

And if inflation looks like it could become a threat, the government would just tax the excess money out of the economy.

As I’ve explained before, MMT is a badly flawed theory. It assumes a mechanistic approach to money and inflation, which doesn’t exist in the real world. It could end in hyperinflation and would likely be a complete disaster.

But because of central bank incompetence, MMT could one day become a reality.

Pick your poison — the central banks or the politicians.

Below, I show you why globalism is all about political control, since globalists don’t trust you to do the right thing. Read on.