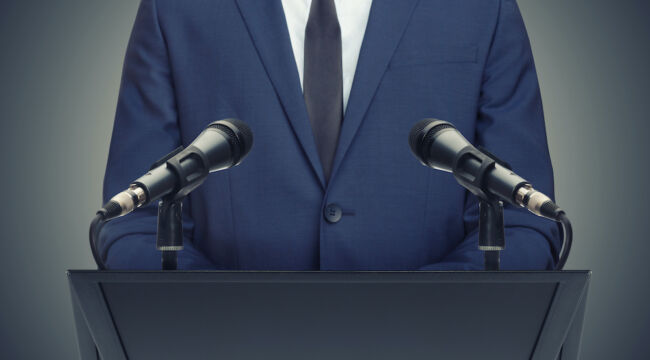 A man hunting high office is a man to be watched. And the higher the office he seeks, the closer he must be watched.

For this is an ambitious man. And as one fellow who raged with ambition — Napoleon — stated:

Those endowed with (great ambition) may perform very good or very bad acts. All depends on the principles which direct them.

We generally place our money on “very bad acts.” We have read the history books.

Yet a man after high office is also a man to be pitied. Why pitied?

All dignity, all honor, all pride, he must sacrifice in exchange for power.

That is because he must face election. Consider the roles that must combine in him:

He must beg, that is, for the franchise of those whom he considers his lessers.

After all… if they were not his lessers they would not require his leadership.

And so you have the aspirant of high office — by turns showman, confidence man and beggar.

Thus this man is a preposterous formula — a man to be both feared and pitied.

Is this the description of a respectable man? Of a normal man?

Yet it is the description of a man seeking high office.

But who respects a follower? Not his leader.

What Politicians and Salesmen Really Think of You

A political candidate and a salesman are essentially brothers.

The one solicits your trade, the other your vote.

Each works his whim-whim on you until he fetches his game.

Assume you end up in the bag.

But he merely regards you as a means to a rewarding end.

He inwardly mocks you. He secretly disdains you for being duped by his razmataz.

He regards you as an all-day sucker.

Who then does he respect?

That is, he respects the man who sizes him accurately, the man who penetrates his shim-sham.

This man he will look straight in the eye… and extend a firm handshake of respect.

But he finds so few of them in his travels.

An Intoxicating Yet Horrifying Power

Picture our office-seeker in his natural habitat…

He stands upon a podium gazing out upon a rustling crowd. What does he see?

He does not see individuals. He sees rather a vast, undifferentiated mass.

That is, he sees a forest — but no trees. Or to switch metaphors:

It is as if he is addressing a wheat field.

His whoops and shouts raise a mighty breeze. The entire field sways in the wind, this way then that way, back then forth… on his command.

He is at once intoxicated by the power he wields over the great human mass, yet horrified that it can be so easily throttled up.

It is fearsome to behold.

Our candidate must also appear directly among smaller chunks of this human mass. He considers them his inferiors, yet pretends to be their equals. No, their servant!

He must visit factories and feign interest in their goings-on. Though he despises children he must plant kisses on infant foreheads.

He must attend local eateries, munch bad food and battle bellyaches while shaking countless hands and jabbering with idiots.

All the while he longs to be loafing on his sofa in his underwear, looking at the television.

Invariably, one man takes him by the ear and will not let go. He babbles about his family, his job, his bowling trophy.

Fortunately, our candidate has devised a stratagem beforehand in case of this precise event…

Before entering, he instructs a member of his security detail to watch for a signal. When he rubs his nose, his man would approach urgently and whisper something of obvious gravity into his ear.

“I’m sorry, it’s been great talking to you, but I have to tend to important business.”

Off he goes at flank speed.

The whole while he monitors his watch like a man whose parking meter is running low.

At last, the moment of deliverance arrives.

“What a great time. I’d love to stay here all day and talk with you fine people, but I’m afraid I have to move on. Now, don’t forget to vote for me on election day. And get your family members and neighbors to vote too!”

A raucous, perfectly cadenced chant suddenly erupts from the assembled.

With a practiced smile and wave of the gladhand, our candidate lights out for the exit.

On the way out he takes his campaign manager in tow: “I can’t believe you brought me to this damn place. One more like this and you’re going to be my former campaign manager.”

But it is only morning. He is then tortured by the realization that he must repeat the act at lunch in Columbus and dinner in Wilkes-Barre.

Then there is tomorrow in Ocala, Macon and Raleigh.

It is dreadful business.

The Price To Pay for Power

In his private moments, in the silent watches of the night, he wonders if it is all worth it.

He decides — begrudgingly — that it is.

Such is his lust for office. It simply overwhelms and envelops him.

He is claw-mad for power.

He assures himself it will all be a distant memory once he is secure in office, reneging on all the promises he had made to those half-wits and quarter-wits at those ridiculous events…

‘Don’t these people realize that they’re being used as political pawns? Do they think that eating pancakes with me and telling me about their mother is going to somehow influence me?’

But his reprise is brief. In two years or four years or six years, he will seek reelection. And the entire process must begin anew.

Only next time his cynicism has doubled — no, tripled. The political process has worn the very soul out of him.

Yet he is consoled and soothed by this one central fact: