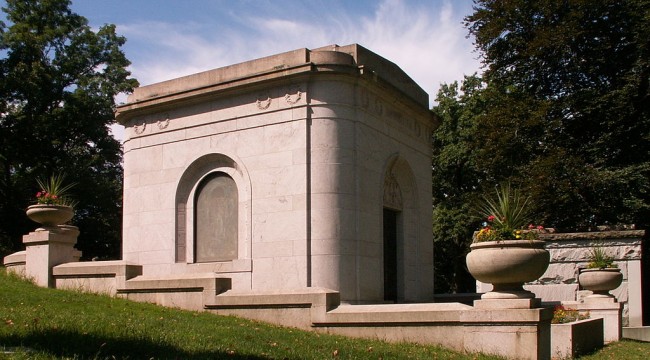 “You can’t bury bodies here in New Orleans,” said the tour bus driver. “The water table makes them pop back up. Then they float away, and it bothers people,” he said with a smile.

We’d never thought about it until our Byron King related the story. But it makes sense: Most of New Orleans lies below sea level.

Byron was in the “Big Easy” last spring and took a tour on an afternoon an appointment fell through. “The most surprising stop was one of the city’s famous graveyards. Not your usual tourist trap. According to our driver, this is the graveyard in which part of the 1969 counterculture movie Easy Rider was filmed.

“But it also held a secret investment insight. I may have been the only one to spot it.”

If you can’t bury the dead in New Orleans, what do you do instead?

“The solution is for families — even groups of families, in some cases — to build mausoleums in which to place deceased relatives,” says Byron. “Yet these aren’t like mausoleums up North. No fancy, airtight metal caskets, sitting entombed for all ages in mini-monuments made of granite block. Nothing like that.”

As the bus driver explained, a body is laid out on a slab inside the mausoleum. Then the mausoleum is sealed up with bricks and a thin coat of concrete.

“Then,” Byron goes on, “the body literally ‘bakes’ inside the mausoleum, under the hot sunshine that prevails in New Orleans much of the year. After ‘not less than a year and a-day’ — the legal requirement — cemetery workers break down the sealed opening on the mausoleum and remove the bricks. 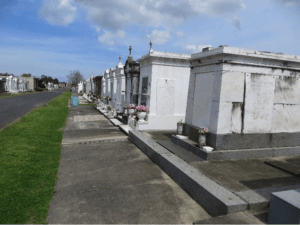 The solar-powered mausoleums of New Orleans [photo by Byron King].

“Then they use long poles with something like a garden rake attached to push the now-decayed remains back into the rear of the mausoleum. They fall onto the earth and essentially recycle down into the ground of the natural world. This clears space and leaves room for another body when the need arises.

“We’re dealing with a solar-powered crematory, in a sense,” says Byron — getting us closer to the investment insight. “Sunlight does the job of speeding a body along to rejoin the dust of the universe. Those old New Orleans mausoleums were way ahead of their time.”

When Byron says solar’s time has arrived, we pay heed: He looked askance in 2008 when solar investments went through a momentary mania. The Guggenheim Solar ETF (TAN) made its debut that year, priced above $250. Months later, it was below $50. Good thing he steered his readers clear.

But the economics are completely different now. Jody Chudley, one of Byron’s colleagues on our energy team and another skeptic turned believer, affirms that with hard numbers. “The rate of growth has skyrocketed since 2010,” he tells us, “with each of the past several years seeing 30 gigawatts of capacity added.” 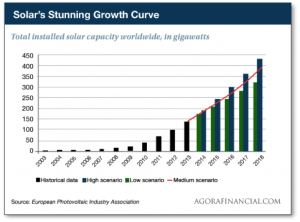 Usage is way up because costs are coming way down. “The reasons for this cost decrease,” Jody goes on, “have been dropping cost of installation, generous tax incentives, cheap financing and the efficiencies of scale that come with reaching a certain critical mass: 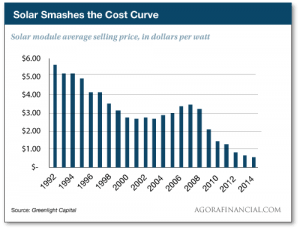 “Skeptics like me thought that we would need to wait decades for solar power to be economically competitive, but we were wrong. It has happened much faster, and it is going to turn our power generation model on its head in the coming years.”

“The solar sector is continuing to warm up with big money,” adds Matt Insley, the third member of our energy triumvirate.

“Warren Buffett earmarked $15 billion for renewables (with a keen eye on solar) — and he said he’d double that investment if he had the opportunity. Elon Musk, the maverick businessman and big thinker behind Tesla and SpaceX, has over $1.1 billion invested in SolarCity.

“Truly, we’ve got a chair pulled up to the high-roller table — these aren’t small bets, to be sure. Whale investors are plunking big money down on solar.” Also on the list: George Soros, Leon Cooperman and David Einhorn.

Why the huge change since 2008? “Panels are more efficient these days,” Matt goes on. “Today’s photovoltaic, or ‘PV,’ cells have the ability to produce much more power than cells from decades past.

“From my calculation, using numbers from Deutsche Bank and the U.S. Energy Information Administration — and confirmed by the folks I’ve talked to in the industry — these solar panels can ‘break even,’ or pay for themselves, in seven-eight years. And they’ll last anywhere from 20-30 years.

“That doesn’t include the 30% tax credit you can grab by installing them — along with any local or state credits. When you add that into the equation, the panels pay for themselves in a little over five years.” And as costs continue to drop, the payoff by 2017 might be as little as four years.

The nuclear power plant disaster in Fukushima, Japan nearly four years ago set off a tidal wave of plant closings around Europe. But it wasn’t enough to quash plans for new nukes in the United States. Stephen Petranek has more on the newest power plant opening in the Tennessee Valley, and the precautions engineers are taking to prevent a nuclear disaster on the home front.