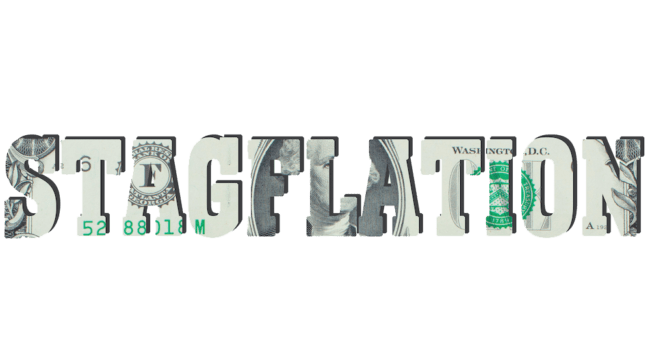 The U.S. Treasury Department has been issuing record amounts of new debt since the coronavirus lockdowns began.

This debt issuance is an important factor driving markets for stocks, bonds, currencies and precious metals.

Looking beyond the short term, in the months and years ahead, the ever-growing supply of U.S. Treasuries will be extremely bullish for precious metals prices and certain other assets that thrive in inflationary environments.

Even though measures of bank loan growth and money supply are surging, this is not yet inflationary because money velocity has plummeted.

Bank loan growth has risen because we’ve seen company after company draw down their revolving lines of credit. They sought to boost liquid reserves on their balance sheets. This is a precautionary move, characteristic of behavior in a recession.

These companies are not going to invest in plant expansions or hiring with all this new debt. Rather, they’re hoarding liquidity to try to ride out what could be an extended recession.

Wall Street’s primary dealers can only absorb so much Treasury debt in a short time frame before finding a permanent home for these securities among their client base of hedge funds, insurers and pension funds.

The Fed’s balance sheet will be the permanent home for many of these Treasuries. So the Fed will likely stand by to absorb any excess supply of Treasuries in the event that yields rise at a pace that they dislike.

Tighter Liquidity Is Bearish for Risk Assets Like Stocks

Some media outlets have mentioned the epic surge in Treasury debt auctions, but it hasn’t gotten broad attention in the financial media.

Several outlets reported on Treasury’s May announcement that it planned to auction $2.999 trillion in securities during the April–June 2020 quarter. It targeted an end-of-June cash balance of $800 billion at the Fed.

That’s a mind-boggling number. And keep in mind that most of this cash hoard was raised from selling new bonds — not from taxing cash out of the existing economy.

Here’s my key point: There has been an ongoing boom in U.S. Treasury security auctions to fund the commitments that the Treasury Department made to dole out stimulus money.

The Federal Reserve has absorbed much of this Treasury security issuance by buying them from primary dealers on Wall Street. However, unless the Fed expands its balance sheet by at least another trillion dollars in the months ahead, liquidity on Wall Street will tighten.

And tighter liquidity is bearish for risk assets like stocks.

The last few times there was a surge in sales of U.S. Treasuries to refill a depleted Treasury account at the Fed (in late 2015–early 2016, and late 2017–early 2018), the Fed wasn’t in balance sheet expansion mode.

So liquidity on Wall Street tightened and those assets at the margins of the global dollar funding system, including emerging markets, corrected sharply.

The takeaway is that if the Fed wants to avoid a repeat of those risk-off episodes and keep liquidity loose on Wall Street, it must reaccelerate its pace of Treasury purchases.

But lately, it has been slowing its purchases from the torrid pace of late March.

I wouldn’t be surprised to see a reacceleration of Fed purchases of Treasuries. The longer this goes on (the Fed financing the Treasury’s deficit), the more the U.S. risks the reputation of the dollar as a store of value.

The blue line in this chart shows the U.S. national debt by fiscal year (which ends in September) since 1970. Fiscal 2019 ended with $22.7 trillion in debt. The annual growth rate of the debt in the post-recession years since fiscal 2010 has been 3–9%. 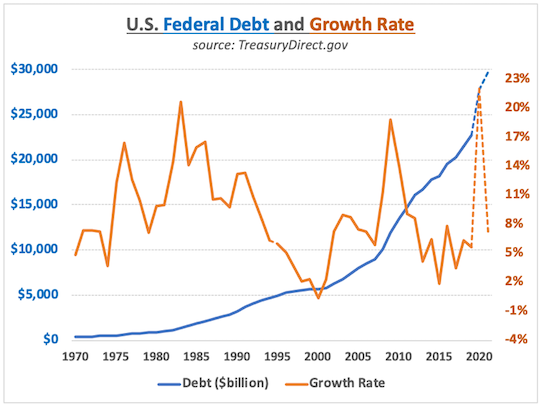 If fiscal 2020 debt jumps $5 trillion from the prior year, the growth rate in the orange line will accelerate to 22%. We haven’t seen these growth rates in the national debt since the late 1970s and early 1980s.

Note that the highest growth rates in the national debt have coincided with strong conditions for gold prices.

A steady acceleration in the national debt throughout the 1970s fueled gold’s first big bull market in U.S. dollar terms. And the exploding deficits of the 2000s drove gold from $300 to $1,900 in 10 years.

Let’s add this bit of context to today’s investing environment: This will be the first time the U.S. will experience accelerating growth in the national debt while the Fed has rates pinned at zero and is buying many of the newly issued Treasury bonds.

All of this activity — which was taken in response to an abrupt March 2020 move into recession and a bear market in stocks — is rapidly boosting the money supply.

We’re seeing an unprecedented injection of newly printed cash into the U.S. economy in a brief time.

The bank loan channel will likely be dormant for a few years, because much of the corporate borrowing on revolving credit lines will be repaid once the worst of the crisis passes. Plus, the default of corporate loans will be a deflationary offset to the recent uptick in corporate borrowing.

The latter channel of cash injection into the U.S. economy (high federal budget deficits) will be the one to watch. As deficits expand, the banking system will be flooded with new deposits, including those from the stimulus checks going out in the mail.

Much of the money that has been sent out to households is being saved. That’s why the latest official savings rate number skyrocketed. As the months pass, more and more of this money will start to circulate through the economy.

But will this newly created money be spent on the same basket of goods and services that was consumed by the typical household in 2019? I doubt it.

As consumer confidence remains low, this new money supply will tend to boost the prices of necessities (or “nondiscretionary” items). Higher prices for necessities will leave less room in household budgets for discretionary items.

Discretionary items include things like restaurants, travel and leisure — all the sectors that employed many people, have been hit the hardest by the coronavirus shutdowns and thus will likely request even more federal relief in the near future.

The capacity (or supply) within these sectors will thus remain limited. Income support from the federal government will cushion the demand hit that would have resulted from the depressed consumption of people who’ve lost jobs within these downsized sectors.

In summary, the cost of the national debt won’t be borne by higher tax rates “on our children and grandchildren,” as politicians and talking heads like to say.

Instead, the cost of the national debt will be borne by holders of Federal Reserve notes, which will buy less than expected in the long run.

Said another way, the cost of endless national deficits is manifested in future inflation.

Once today’s precautionary savings-driven deflation episode ends, we’ll be facing a “stagflation” economy with high unemployment and chronically high inflation in the most commonly consumed items within a typical consumption basket.

And you can expect gold to soar, just like it did in the 1970s when we last confronted stagflation.