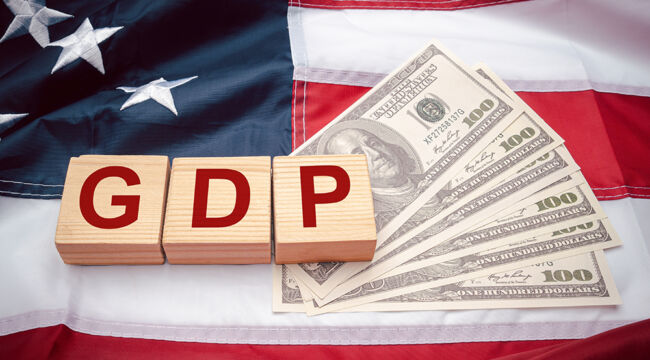 The Recession’s Over — Or Is It?

We learn today that the gross domestic product increased 2.6% in the year’s third quarter. Reports CNBC:

The U.S. economy posted its first period of positive growth for 2022 in the third quarter, at least temporarily easing recession fears, the Bureau of Economic Analysis reported Thursday.

GDP, a sum of all the goods and services produced from July through September, increased at a 2.6% annualized pace for the period, according to the advance estimate. That was above the Dow Jones forecast for 2.3%.

Thus there is greater joy in heaven today…

The United States economy is up from recession — in reminder, the year’s first two quarters yielded negative growth.

Yet today’s report fails to sway us. We do not believe it represents an authentic bounce.

We concede, nature has riveted into us a reflexive distrust of positive news, a very deep cynicism.

In an honest moment, we would likely admit that this distrust verges upon the irrational.

If we witnessed the Lord Our Savior walking on water? We would condemn instantly and reflexively His inability to swim.

We nonetheless remain skeptical of today’s economic news. We remind you that numbers can conceal more than they reveal. They often spin wondrous tales and tell fantastic lies.

Like a Hollywood movie set… a false set of teeth… or a toupee… the numbers are not as they appear.

Let us then seize the numbers by the scruff… and haul them in for interrogation.

According to the Commerce Department’s Bureau of Economic Analysis — whose very data-manglers crafted the report — government spending gave third-quarter GDP a good goosing:

In all, third-quarter government spending expanded at a 2.4% annual rate.

We have not seen the data. Yet we hazard a handsome portion of this spending was consecrated to re-coffering the depleted war stocks dispatched to Ukraine.

Our spies inform us that ammunition is running low.

The defense contractors may be lolling in clover as they begin to make good the shortages. Yet what about the poor beset taxpayer who is handed the bill?

Is this a genuine contribution to the gross domestic product of the United States?

A Transfer of Money, Not a GDP Increase

We remind you that government commands no resources of its own.

It cannot ladle out one dime for “defense” — Ukraine’s or America’s — without first tapping the taxpayer on the shoulder.

What would this taxpayer have done with his money had not the tax man plucked it from his pocket… and emptied it into Lockheed Martin’s pocket?

Each option constitutes an authentic contribution to the gross domestic product in one way or other. Yet the taxpayer’s money was transferred to Lockheed Martin and the others.

Is a transfer an addition? A pickpocket might as well claim his craftwork represents an addition to the gross domestic product.

Yet where is the addition? The purloined dollar the pickpocket spends is the very dollar his victim would have spent — only on different goods or services.

The ledgers are even.

This involuntary transfer is nonetheless credited heavily for the third-quarter’s positive GDP.

Is Bloodsucking an Economic Boon?

Once again we ask: Is this an authentic economic boost — or merely a transfer from one pocket to another?

For the government employee lives off the fat of the land. He takes his living at the taxpayer’s very expense.

What does the taxpayer receive for his sacrifices? Very little. And by “very little,” we extend an uncharacteristic degree of generosity.

In nearly every instance — we will grant certain exceptions — the government employee represents a subtraction from the gross domestic product, not an addition.

Only very strict time constraints prohibit us from expanding the list.

But in the official telling he pinches the taxpayer for a raise and the pinching represents an addition to the gross domestic product.

Within consumer spending, an increase in services (led by health care and “other” services).

You are down with a horrendous toothache. You must take the day off from productive employment to visit the dentist.

He yanks a tooth….

Or you must have your appendix plucked and you are confined for days to a sick bed. Or you break your leg and are down for weeks.

The tooth-yanker, the appendix-plucker and the break-setter are better off — and may the Lord bless them for their inestimable service to the human race.

Yet should we consider your agonies and their necessary alleviation an economic blessing and a gain to GDP?

The classical economist Frederic Bastiat and his broken windows spring immediately to mind.

A hooligan heaves rocks through a shopkeeper’s window. This shopkeeper must contract the glazer’s services to replace the window.

The transaction represents an economic benefit, argues the superficial-seeing. Look at the new money our fortunate glazer has to spend on the cobbler, the baker, the butcher.

Yet they neglect to consider the money the original shopkeeper cannot spend on the cobbler, the baker and the butcher.

He has spent it on the glazer — and merely to rise up to even. He has gained not a thing. Again, where is the economic gain?

We have but one request: that government confines itself to lies and damned lies.

It is the statistics we cannot take…