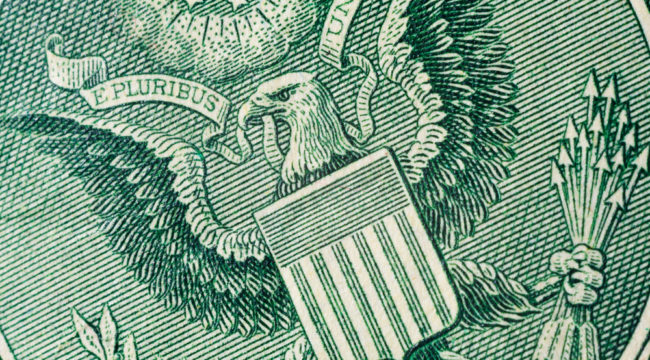 Markets were apprehensive this morning, on edge… like an accused killer awaiting the jury’s verdict.

The verdict in this case:

The second-quarter GDP report, announced this morning by the United States Department of Commerce.

A positive report would indicate tax cuts are living up to advertisement… business is rushing… the economy is on the jump.

A negative report would carry other connotations… none good.

“I can’t remember the last time the markets placed such importance on a GDP number,” affirmed market strategist Guy LeBas.

The verdict came down at 8:30 Eastern…

And the verdict was?

4.1%… in keeping with consensus… and the highest GDP print since the third quarter of 2014.

Second-quarter consumer spending sprung to a 4% annualized rate — miles beyond the first quarter’s 0.5%.

Meantime, second-quarter exports surged to a 9.3% rate… while imports fell to a vanishing 0.5%.

This narrowing trade deficit, we are informed, added one full percentage point to second-quarter growth.

And so there is more joy in heaven today.

Presidential reaction to the news was swift — and robust.

With a pirate’s swagger, Trump made for the nearest microphone… and declared before the world:

We’ve accomplished an economic turnaround of historic proportions. Once again, we are the economic envy of the entire world… As the trade deals come in one by one, we’re going to go a lot higher than these numbers, and these are great numbers.

We would like to believe the president is correct.

But when we smell flowers… our initial instinct is to look around for a coffin (H.L. Mencken’s definition of a cynic).

For years this has been an economy of false starts… false dawns… false promises.

But the economy could not maintain the pressure… and the gauges dropped to 3.2% by 2015’s first quarter.

By the fourth quarter, growth had sunk to a flatlining 0.4%.

The point, we assume, is clear.

We must consider the possibility that today’s hopeful number is a one-off and the surge in exports a last-minute scramble before the tariffs entered force.

This is where the trade wars come in. A lot of import and export orders were shipped to beat the tariffs. A lot of the strength in the second quarter came from exporters trying to get orders delivered to foreign ports before the tariffs kicked in.

“Channel stuffing,” is evidently the term for it.

How did markets react to this morning’s “great numbers”?

Twitter is today’s story in the tech space — down 20% following disappointing earnings.

Shares were down 3%, as quarterly profits fell short of Wall Street expectations.

These were the explanations on offer for today’s action, anyway.

But now the all-important question:

How does the Federal Reserve interpret today’s GDP report?

A strong GDP number — and 4.1% is still a good number… will signal that the Fed can continue with its plan for rate increases.

Right now the Fed’s on track to raise in September. I would give that a very high probability.

But what if the Fed misreads the GDP numbers?

If today’s report proves phantom, if the tariffs begin to work damage and the tax cuts lose their bite… the Fed will be “raising into weakness.”

The entire business will come to grief one day, of that we are confident.

As explained yesterday, we do not think it will be this year.