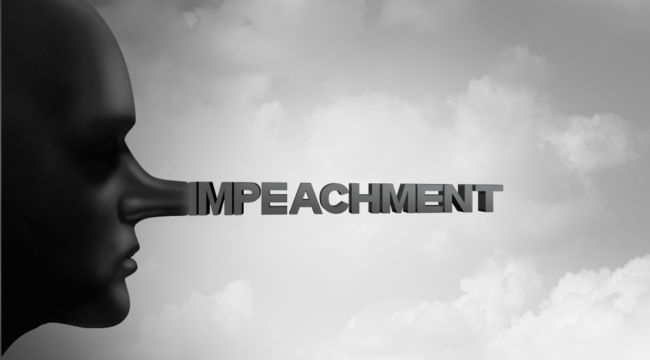 The Real Purpose of Impeachment

The focus of the anti-Trump forces has shifted. “Russiagate” did not remove Trump from office as his opponents had hoped. The long-awaited Mueller report on “collusion” by Trump with Russia turned out to be an anticlimax showing no collusion.

But the “resistance,” aided by the deep state and the media, were not through. Efforts to harass and distract Trump are now mainly for the purpose of weakening Trump’s reelection prospects and promoting the election of an opponent from among a field of Democratic candidates.

We see that in the latest impeachment delopments. House Speaker Nancy Pelosi announced an impeachment inquiry this Tuesday, which will likely lead to formal impeachment charges against President Trump sometime this fall.

You probably know the details by now, so I won’t rehash them. But here’s how Rob Kall, founder of the progressive OpEdNews, has explained the real purpose of pursuing the impeachment of Trump:

“The idea should be to keep the impeachment going as long as possible, with new testimonies and new releases of disclosures of alleged corruption and treason on a regular basis.

“Looking at impeachment as a process for removing the president is the wrong way of thinking about it. Looking at it as a key that gives access to investigative tools is the smarter, more strategic, way of looking at it.

“Ideally, it will get so bad for Trump that the Republicans will end up putting up someone else to run in the general election.

“But keeping him under investigation, at least through the November election, will increasingly erode the support of both Trump and the Republican party brand, making a Democratic takeover of the Senate and the White House, and an increased control of the House even more likely.”

Will the strategy work to defeat Trump at the polls next year?

I usually update my Trump reelection forecast monthly, but I do it more frequently when there’s breaking news. I’ve just improved Trump’s reelection probability from 67% to 69% on the latest impeachment story involving Trump and Ukraine. It won’t change a single mind, but it will drive Trump turnout.

A Quinnipiac poll has found that 57% of Americans oppose impeachment, while only 37% support it. That means a large number of voters who generally disapprove of Trump still oppose his impeachment. So impeaching him risks alienating swing voters. The whole story is a nothingburger.

In the first place, Trump was cleared of crimes and campaign finance violations by the Justice Department (based on access to transcripts, the whistleblower report and more) before Pelosi’s “impeachment inquiry” announcement. So Democrats are going down another rabbit hole.

The greatest question facing President Trump over the next year is whether or not he can avoid a recession. If he can, he stands an excellent chance of reelection. If he doesn’t, then a Democrat will likely win.

Despite some stock market volatility due largely to the trade war, Trump supporters will be the first to tell you that the stock market has rallied from 18,529 on the Dow Jones industrial average index the day before Trump was elected to about 26,800 as of today. That’s nearly a 50% gain in 34 months.

Unemployment is near 50-year lows. African-American and Hispanic unemployment is at an all-time low. Labor force participation is steady after falling during the Obama years. Food stamp usage is down. Housing prices are up. Inflation is under control. Real wages have shown their best gains in over 10 years.

While the economy is not booming by historical standards, it is producing its best performance since the global financial crisis. The U.S. economy looks particularly strong when compared with major trading partners such as the U.K., France, Italy, Japan and Germany. Even China is slowing dramatically as the U.S. continues to perform as a reliable engine of world growth.

The foregoing economic track record is repeated by Trump supporters and their (few) media allies. Most of the media simply ignore these data and continue the Trump bashing. These dueling narratives are by now business as usual when it comes to Trump.

But behind the media spin curtain, there is some reason to be concerned about the economy.

Manufacturing output is declining, both on a month-over-month and year-over-year basis. Certain indexes of new orders and shipments are also showing declines. Imports and trade deficits have both increased sharply.

The yield curve, which is a historically accurate recession indicator, is inverted in some sections.

None of these indicators is declining to extreme levels and there are other indicators showing positive results. None is pointing to a recession in the short run, but all should be worrisome to Trump as he heads into 2020.

The Fed has now cut rates twice since July. The problem is that monetary policy acts with a lag of 12–18 months. The Fed last raised rates in December 2018. It had also raised rates several times previously. So the effects of the Fed’s previous hiking cycle are still being felt.

Meanwhile, first-quarter growth of 3.1% slowed to 2.1% by the second quarter. The latest projection of the Atlanta Fed’s GDPNow model estimates third-quarter growth at the same 2.1%. But that model is usually excessively optimistic.

None of these trends (tight money, inverted yield curve, slower growth, etc.) is a sure predictor of recession, but all give some cause for concern. The current expansion (123 months long) is the longest expansion in U.S. history.

However, it is also the weakest expansion in U.S. history. The current expansion shows none of the inflation, labor shortages or capacity shortages that historically cause the Fed to raise rates and trigger a recession.

But there are other factors (trade wars, global slowdown, financial panic) that are beyond the Fed’s control and could also lead to a recession.

But recession is the hardest to forecast with great accuracy and is therefore the biggest wild card. Trump was elected in large part, despite his off-putting demeanor, because he promised a better economy. He has delivered in part, but has to keep delivering.

In effect, Trump’s probability of victory is simply the inverse of the probability of a recession in the next 18 months. As goes the economy, so goes Trump.

If the economy goes into a recession, that could translate into a voter search for a new economic solution and that could lead straight to the Democratic promise of “free everything.”

Right now, Elizabeth Warren is the greatest beneficiary of the impeachment imbroglio. She was already gaining fast on Biden, whose own allegations of impropriety with respect to Ukraine will be exposed as the impeachment process unfolds.

The impact of this election cycle on markets will be profound and the stakes for investors have never been higher. The time for investors to prepare is today.

That means you’ll want to be ready with a portfolio of gold, silver, fine art, land, cash, intermediate-term Treasury notes, and private equity.

And buckle in. It could be a very bumpy ride ahead.