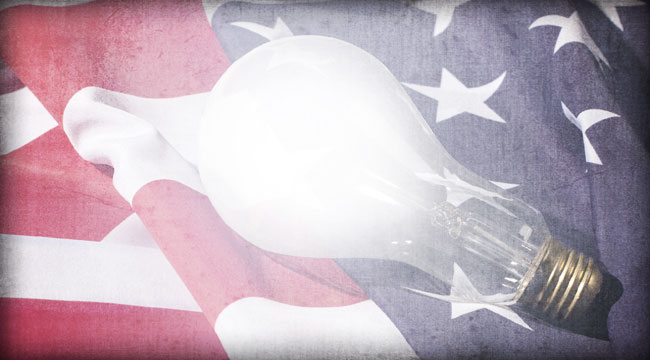 The Painless Way to Pay Off America’s Debts

Whatever your views on the role of government, one thing is clear: There will be no way to pay for it if the economy doesn’t grow. And I’m not talking by a measly percentage point or two. If we can’t find our way back to 5% annual economic growth or above soon, America’s accumulated federal and state debts will propel us down the same downward spiral as Detroit, Stockton, and Greece.

So how do we reach that kind of growth? Innovate!

Few sectors of our economy remain as vibrant as the convergence of consumer electronics and telecommunications. Freed from the shackles of government-sanctioned monopoly 30 years ago and fueled by Moore’s Law advances and Silicon Valley entrepreneurship, an explosion of innovation is powering growth that is rare in other sectors of our economy.

Yet, it could come crashing down, if we follow the lead of Europe and buy into the Precautionary Principle, “the idea that new innovations should in some way be curtailed or disallowed until their developers can prove that they will not cause any harms to either individuals, groups, specific entities, cultural norms, business models, or other types of traditions.”

That’s the explanation provided by Adam Thierer, Senior Research Fellow at the Mercatus Center at George Mason University and author of Permissionless Innovation: The Continuing Case for Comprehensive Technological Freedom.

The Precautionary Principle has inserted itself deftly in Europe, where public intellectuals like Thomas Piketty are praised for wanting to sacrifice progress and growth on the altar of equality. That stands in bold contrast to America’s tradition of rewarding what Thierer calls “permissionless innovation.”

For public policy, this leads to a simple prescription. As he argues, “[U]nless a compelling case can be made that a new invention will bring serious harm to society, innovation should be allowed to continue unabated. If problems develop they can be addressed after the fact.” [Emphasis added]

The problem with the precautionary principle is that it operates under an assumption of clairvoyance as to what problems may arise in the future, while paying little heed to the risks of the failure to innovate. As Thierer notes, succumbing to the European disease can only lead to European results.

To underscore his point, consider the “natural experiment” that has been playing out on both sides of the Atlantic. “American companies are household names across the globe — Google, Facebook, Microsoft, Yahoo, Apple,” notes Thierer. “Ask anybody if they can name any European tech innovators over the last decade.”

If you’re hearing crickets, you’re not alone. Policy had to have something to do with that.

Gary Shapiro, president of the Consumer Electronics Association, understands. He’s been on the front lines protecting innovators from stifling regulations for over 30 years, cutting his teeth on the seminal Sony Betamax Supreme Court Case.

Shapiro calls the five-to-four decision in favor of permitting the sale of Video Cassette Recorders the “Magna Carta” of the consumer electronics industry, “because it allowed so many other technologies from the iPod to the internet itself to personal video recording technology, even copying machine technology, to prosper.” Contrary to the dire predictions of Jack Valenti, then-president of the Motion Picture Association of America, the VCR did not kill the movie industry.

Rather, it helped break the major studios’ grip over much of Hollywood’s value chain. As a result, Americans now enjoy more movies distributed via more technologies than ever before.

Shapiro argues that some of our biggest problems, from agriculture to health care to water resource management, will be solved thanks to the innovation spurred by unfettered access to telecommunications, computation, and consumer electronics. “We are in an incredible time in history where anyone in the world with a broadband connection and a computer, for a few thousand dollars, can start a business with worldwide implications.” But, he cautions, there are a lot of ways governments can screw it up.

Shapiro’s biggest peeve is the turmoil inflicted by patent trolls on the economy. He blames outdated patent laws. Patent trolls are individuals or businesses that file spurious patents on ordinary business systems, to force those who want to use the patented goods to buy them out.

A recent study by two Boston University legal scholars estimates that so called “non-practicing entities” are inflicting $29 billion a year in losses across the economy. Other scholars have criticized that estimate as too high, but if the real number were even half that, it would suggest a genuine problem in need of fixing.

Here’s how the scam works. Trolls send out thousands of “extortion letters” to businesses large and small accusing them of infringing obscure, invalid, or questionable patents that the trolls bought up seeking quickie settlements. “I can’t think of another business issue that has had such a pervasive deleterious effect on national productivity and cost,” Shapiro fumes. “It’s a legalized mafia.”

He may have to fume a little longer.

The House overwhelmingly passed bipartisan reform legislation endorsed by President Obama titled the Innovation Act to address these issues, but the bill died in the Senate at the hands of Majority Leader Harry Reid. Apparently, the “loser-pays” provision was considered too big a threat to their business model by trial lawyers and their lobbyists. Shapiro issued a press release calling it “a sad day for American innovators, businesses and consumers.” Guess he’ll have to roll up his sleeves and go back to work.

Adam Thierer and Gary Shapiro are my guests this week on RealClear Radio Hour. You can hear their stories in their own words here.

Bill Frezza
for The Daily Reckoning

Today, showing you the consequences of irrational trade policies and how you can protect yourself from it all.

Bill Frezza is a 35-year veteran of the technology industry. After graduating from MIT with degrees in both science and engineering, Bill spent his early years at Bell Laboratories. Since then, he has worked as a product manager, salesman, marketer, entrepreneur, consultant, technology evangelist, and venture capitalist.