Dr. Paul Krugman — a man of knowledge — is talking again. The Nobel laureate informs us:

“The only fiscal thing to fear is deficit fear itself.”

Do you fear the latest cyclone of deficit spending will rip a swath through the Treasury?

This year’s budget deficit will likely near $4 trillion, after all — the largest in history.

Goldman Sachs estimates a $6 trillion combined deficit over the next two years alone.

Meantime, the Committee for a Responsible Federal Budget (do not laugh!) projects publicly held debt will eclipse its post-WWII record by 2023.

Let us assume these projections alarm you. And why should they not?

But Dr. Krugman would set you down as a sort of ox… an imbecile… some poor undersoul who is deaf to the music of the spheres.

The celestial bells are audible only to those — like him — with a nuanced and penetrating grasp of economics.

And these bells chime an ode to deficits.

Reports the good professor, heaven’s tunes jingling in his ears:

It’s true that we’re headed for some eye-popping numbers. Last week the Congressional Budget Office released preliminary economic and budget projections for the next two years, which were both shocking and unsurprising…

In particular, the budget office expects the COVID-19 crisis to drive the unemployment rate to 16% in a few months, which might even be on the low side.

Soaring unemployment will cause federal revenues to plunge and also lead to a surge in spending on safety-net programs like unemployment insurance, Medicaid and food stamps. Add in the large relief packages Congress has passed and the budget office projects a deficit that will temporarily rise to levels we haven’t seen since World War II, and it expects federal debt to rise to 108% from 79% of GDP, which sounds scary.

Yes, it “sounds scary.” But of course it is not scary — to those who understand:

But the government will be able to borrow that money at incredibly low interest rates. In fact, real interest rates — rates on government bonds protected against inflation — are negative. So the burden of the additional debt as measured by the rise in federal interest payments will be negligible. And no, we don’t have to worry about paying off the debt; we never will, and that’s OK.

“The Dose Makes the Poison”

The question is not entirely fair, of course. Debt is not lethal in itself.

You may liken debt to alcohol…

In light doses drink lightens the heart. It flushes the cheeks. It unties the tongue… like the initial glass of bubbly at a wedding.

It is a fabulous facilitator of fun and frolick.

The dose makes the poison.

And so with debt. In the proper doses it is a pleasant stimulant, a spirit-lifter, a social lubricant.

Fifty years ago, $1 of debt may have yielded an additional dollar of economic growth, real or otherwise. Perhaps even more.

That is of course because the national debt burden was vastly lighter. The gold standard enforced a general fiscal sobriety, feeble though it was in its dying days.

Until 1971 the federal government might crave a tumbler of debt. But the barkeep could demand gold in return — payable on the nail.

But then the gold window came slamming down. And Uncle Samuel could raid the shelves without fear for his gold. The entire bar was thrown open to him — on credit.

Extend a running tab to a rascal with an unquenchable thirst for rum… and here you have the results: 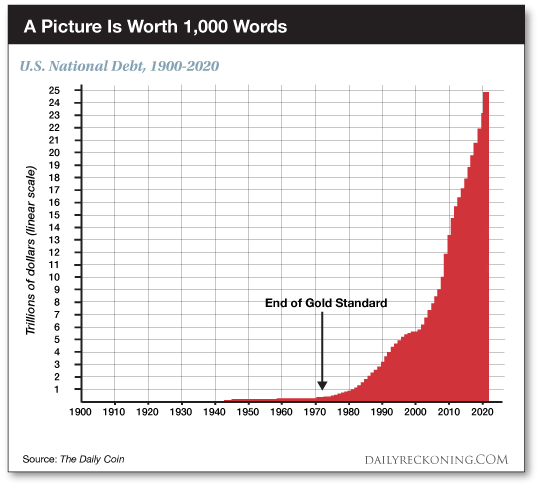 By now the hopeless sot has acquired such a tolerance for drink… he requires ever increasing helpings to obtain a boost.

Each dollar borrowed since 2008 has yielded under $1 of growth. It is perhaps 40 cents, by some estimates we have encountered.

More liquor, that is. But less joy.

And now this tosspot is ordering doubles and triples, sinking them faster than the barman can pour them out…

Crisis spending may add $2 trillion to this year’s deficit alone. The nation’s debt already rises above $24.8 trillion — a $5.3 trillion ballooning in only four years.

The ladies and gentlemen who run the National Debt Clock project it will read $41.7 trillion four years from today.

It is a mere projection, of course, a gazing into crystal. But we wager high it rings in nearer to $41.7 trillion than $30 trillion.

At what point will the world abandon confidence in the dollar?

The question is more easily asked than answered. But it is a question best left unanswered… if you live and die by the dollar.

“The Wicked Borroweth, and Payeth Not Again”

Yet Dr. Krugman is ruffled neither by deficits nor the national debt. Again, he writes:

The government will be able to borrow that money at incredibly low interest rates. In fact, real interest rates — rates on government bonds protected against inflation — are negative. So the burden of the additional debt as measured by the rise in federal interest payments will be negligible. And no, we don’t have to worry about paying off the debt; we never will, and that’s OK.

But we will overlook Dr. Krugman’s wicked counsel. Instead we ask:

Is borrowing at extremely low rates truly a warrant to plunge deeper into debt?

It is true, again, the government can presently borrow at these rates. But this is likewise true:

The sheer accumulation of debt can wash out the lower rates. That is, interest payments on the debt increase nonetheless.

Writing in November 2017 is Michael Kosares, founder of USAGOLD:

As interest rates have declined over the last several years, the interest paid by the federal government has increased markedly due to the rapid growth in size of the accumulated debt…

In 2008 when the national debt stood at $10 trillion, the federal government paid $336 billion in interest. For a measuring stick, the 10-year Treasury bill drew an average interest rate at the time of around 3.66%.

In 2012 when the debt crossed the $16 trillion threshold, the interest payment was almost $456 billion. The 10-year Treasury bill drew an average interest rate of 1.80%.

In 2016 with the national debt approaching the $20 trillion mark, the interest payment was $497 billion. The 10-year Treasury bill drew an average interest rate of 1.84%. It is difficult to overlook the fact that 2016’s interest payment was an all-time record at the second-lowest rate [in 46 years].

Today the 10-year Treasury note yields a vanishing 0.61%. Total debt is nonetheless $5.3 trillion higher than in 2016. And it is piling high.

What if rates increase as the bond market recoils in horror at the prospect of a $41 trillion national debt?

Interest payments could wash over the entire budget.

Debt service is already rising faster than any other federal shell-out.

Prior to this crisis the Congressional Budget Office already projected debt service would scale $915 billion by 2028 — nearly 25% of the entire budget.

The Lord only knows the ultimate figure. But it will likely be far higher absent a drastic reversal of economic fortune.

How will the government afford to pay for anything else?

We foresee little reason to expect a change. Yet we cling to hope, as a drowning man clings to a life ring — or as a drunkard clings to his bottle.

The nation’s debt is not a crisis because “we owe it to ourselves,” argue the spenders.

But one scalawag takes them at their word. “Note to self,” he writes: