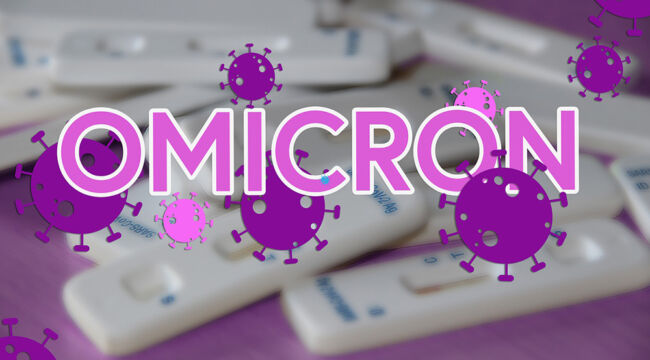 We hazard Rabobank’s Michael Every is correct. Perhaps the potential for additional stimulus is why the stock market trampolined so high today.

Safe haven gold was unsafe for haven seekers — down $15 and change today.

But we suspect the Omicron variant — so-called — will prove a phantom menace.

By all indications it is a mere nuisance. It inflicts mild sniffles, coughs and irritations.

The few documented cases are healthy again, all recovered in full. These include the two United States cases.

The Way to Herd Immunity?

It is evidently greatly contagious. Yet also evidently, it lacks ferocity. The murderous passion is not in it.

It will therefore spread far and it will spread wide… while leaving little wreckage.

The infected will then acquire a sort of natural immunity.

Since it will not kill its hosts but merely annoy them, they will hand it off to others.

This punchless strain could then become the dominant strain.

We speculate of course. The Omicron variant may prove mightier than we envision.

Yet the evidence to date indicates it will not. 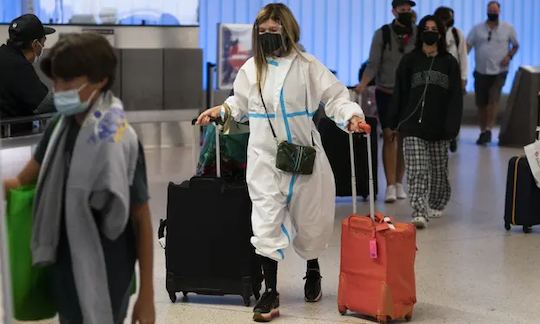 But in this we are extremely confident: The Omicron variant will become the warrant for additional government gooning.

Dr. Fauci and his understrappers will bark that the unvaccinated are to blame for the variants. They will credit the vaccines for blunting Omicron’s lethality, rather than acknowledge the strain’s natural punchlessness.

They will therefore yell louder and louder for vaccine mandates and universal vaccination — depend on it.

For the fully vaccinated, they will require booster shots. Here Dr. Fauci allows the feline out of the burlap sack:

Even though we don’t have a lot of data on it, there’s every reason to believe that kind of increase that you get with the boost would be helpful at least in preventing severe disease of a variant like Omicron.

The public health authorities will take their guidance from Europe…

The Return of the Gesundheitspass

Austria has once again imposed stringent lockups in response to rising infections. Austrians can exit their homes only for very limited reasons.

Sixty-seven percent of its people are fully vaccinated. Yet it is evidently insufficient.

Just today Germany announced lockups for the unvaccinated. These recalcitrants will be largely banned from society, polite and impolite alike.

They will only be permitted out of doors under limited circumstances. Is this the reincarnation of Nazi Germany’s Gesundheitspass — “health pass”?

More importantly… will the United States fall in behind Europe? Fortune magazine:

The jury is still out in the U.S. on how to deal with Americans who are unwilling to get vaccinated, but European countries are increasingly choosing the stick over the carrot as governments across the continent turn to hard-line methods from lockdowns to fines in order to coax the unvaccinated to take the jab. The message: Get vaccinated or don’t participate in society… Europe has often made COVID-19 moves before the U.S., and some analysts expect these measures to migrate across the Atlantic…

No exceptions are granted for the naturally immune, at least to our understanding. Yet studies indicate natural immunity confers up to 27 times the defense of vaccines.

As we have asked before: Why would the naturally immunized require vaccination if their own immunity is vastly superior?

We can conceive of no reason in law or equity why they would.

Yet we must all break to the common harness, we must all yank in one direction — young and old, robust and weak, healthy and sickly alike.

We might grant the public health goons a fairer hearing if vaccines were reliable sentries.

Yet the evidence indicates that they are not.

A representative sample of the vaccinated are afflicted.

Vaccines may limit hospitalizations and deaths — thank the Lord — but so do proven therapeutic treatments.

Hence the yelling for booster shots.

Yet each dose of vaccine presents risk. The precise numbers of severe side effects… and deaths… are not known.

But they are likely far greater than reported. Perhaps by many multiples.

And the risk of severe side effects increases with each needling.

How many will suffer agonies when drilled with a fourth, a fifth, a sixth… a ninth booster?

Here is another possibility to be considered, which we have raised in earlier reckonings: The vaccines themselves may be propagating the very virus they are designed to rout.

That is, the vaccines themselves may be frankensteining new variants into existence.

“It Is the Vaccination That Is Creating the Variants”

Dr. Luc Montagnier is a French virologist and 2008 winner of the Nobel Prize in Medicine. Says he:

“It is the vaccination that is creating the variants.”

How precisely are vaccines creating the variants?

There are antibodies, created by the vaccine. What does the virus do? Does it die or find another solution? The new variants are a production and result from the vaccination. You see it in each country, it’s the same: The curve of vaccination is followed by the curve of deaths.

When the “Cure” Is the Problem

Here is Dr. Robert Malone — pioneer of the mRNA technology upon which these vaccines are structured — in agreement:

The most important reason why a universal vaccination strategy is imprudent tracks to the collective risk associated with how the virus responds when replicating in vaccinated individuals.

Here, basic virology and evolutionary genetics tell us the goal of any virus is to infect and replicate in as many people as possible…

The more people you vaccinate, the greater the number of vaccine-resistant mutations you are likely to get, the less durable the vaccines will become, ever more powerful vaccines will have to be developed and individuals will be exposed to more and more risk.

Neither Dr. Montagnier nor Dr. Malone represents a lone voice crying out from the wilds.

Dr. Geert Vanden Bossche is an authority on the science of vaccination. He has provided his expertise to Novartis and the Bill & Melinda Gates Foundation, to name some.

According to this fellow:

There can be no doubt that continued mass vaccination campaigns will enable new, more infectious viral variants to become increasingly dominant and ultimately result in a dramatic incline in new cases despite enhanced vaccine coverage rates. There can be no doubt either that this situation will soon lead to complete resistance of circulating variants to the current vaccines.

Here is irony itself… if true: The very hunt for the cure could push the cure beyond reach.

And so the dog undertakes a merry chase of his tail. The tail, the virus, will always keep its lead over the dog, the vaccine.

A far more optimal strategy is to vaccinate only the most vulnerable. This will limit the amount of vaccine-resistant mutations and thereby slow, if not halt, the current vaccine arms race…

There has been much controversy over ivermectin and hydroxychloroquine. Yet with the emergence of a growing body of scientific evidence, we can be assured these two medicines are safe and effective in prophylaxis and early treatment when administered under a physician’s supervision.

The American people deserve better than a universal vaccination strategy under the flag of bad science and enforced through authoritarian measures.

The American people may deserve better. But as we have argued before:

The American people may never get better.