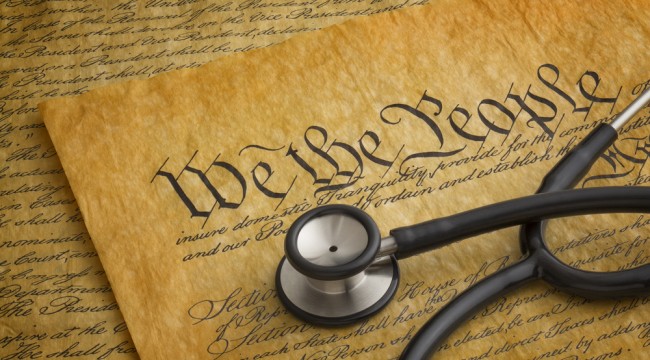 The Obamacare Failure No One's Talking About

In September 2009, when President Obama made a primetime speech pitching his not-yet-passed health care overhaul, he made the following promise: “I will not sign a plan that adds one dime to our deficits — either now or in the future. Period.” To prove his seriousness, he further promised that “there will be a provision in this plan that requires us to come forward with more spending cuts if the savings we promised don’t materialize.”

The promise of deficit reduction was repeated over and over in the months before the bill became law, and it was central to Obamacare’s passage. Congressional Democrats would likely not have voted to pass it had the Congressional Budget Office (CBO) not scored the bill as a net reduction in the nation’s deficits.

Yet earlier this month, the CBO, which provided the original estimate and evidence that the law would be deficit neutral, said that it can no longer score the net fiscal effect of the law in its entirety.

The problem is that in addition to expanding health coverage, Obamacare also modified a variety of existing federal programs, and it was through those modifications that it achieved much of its deficit reduction. But those changes have not all been implemented as originally planned, and now the agency says it can no longer judge the complete fiscal effects. “Isolating the incremental effects of those provisions on previously existing programs and revenues four years after enactment of the Affordable Care Act is not possible,” a budget office report said in April.

What that means is that if the deficit savings Obama promised don’t materialize, we may never know.

Indeed, there’s a lot that will be tough to know about Obamacare, both now and in the future — and it’s not just because of the CBO. Over the last few months, a series of reporting and measurement changes from a variety of government agencies have made it vastly more difficult to usefully measure the law’s outcomes. A law as sprawling and complex as Obamacare was always going to be a challenge to measure; these decisions have made it harder still.

The pronouncement from the CBO, which came buried in a footnote that was not noticed for more than a month, came on the heels of an earlier announcement from the administration that it would cease its recurring reports on Obamacare sign-ups following the close of the law’s first open enrollment period.

Those reports, which provided official numbers on sign-ups and basic demographic information, were often frustratingly incomplete. But as limited as those reports were, they were one of the few official sources of information about the results of the law.

…the old methodology significantly overstated the number of uninsured; the new questions will produce a lower number.

The administration’s decision means that, at minimum, it won’t be possible to see how enrollment fluctuates outside of the open enrollment period, an issue that has frustrated some supporters of the law. And it may mean that we will lack even the limited clarity of this year’s reports in coming years: The administration won’t commit to releasing the reports again once next year’s open enrollment period begins this fall, according to a report in Politico.

Tracking the effects of the law on health insurance coverage has been made even more difficult by a series of changes to the way the Census Bureau measures the uninsured. The Census has long provided the canonical estimate of the number of uninsured around the country, and when advocates made the case for Obamacare based on the number of uninsured, they usually used figures pulled from Census data.

But in April, The New York Times reported that the Census Bureau would be changing the way it asked about insurance status in what the Bureau describes as a “total revision to health insurance questions.”

Researchers say that the old methodology significantly overstated the number of uninsured; the new questions will produce a lower number. That’s convenient for Obamacare. But what it means is that it won’t be possible to determine how much of the reduction is caused by the change in questions rather than by policy changes or other factors.

As a result, the new data on the uninsured won’t be comparable with the Census’ long history of data on the uninsured. It’s a break in the time series, one that leaves only a single year of pre-Obamacare coverage data for comparison — a year, 2013, in which the insurance market was already undergoing significant upheaval.

Census Bureau officials say the change was driven by a desire to get more accurate information about the uninsured. But several of the new questions were requested by the Obama administration’s Department of Health and Human Services, according to The New York Times, and the White House budget office approved the update.

In one case, federal health officials even tried to intervene to stop state authorities from reviewing health insurance data. Earlier this year, the Centers for Medicare and Medicaid issued a directive saying that states should not audit eligibility for public health insurance programs like Medicaid because they are developing their own system.

But in Minnesota, the state’s legislative auditor, James Nobles, has to proceed with a review of how the state’s Obamacare exchange determines eligibility as part of a comprehensive examination of the insurance portal, despite the order not to proceed. He described the federal order as “unprecedented,” according to a report by Minnesota public radio. “The reason we have external auditors, independent auditors,” he said, “is because you need somebody from the outside to come in and hold people accountable [for] what they’ve pledged to do.”

That’s not just true in Minnesota. President Obama promised accountability for the health care law. But these changes have made tracking the law’s results, and holding anyone accountable, much more difficult.

Ed. Note: President Obama might have lied when he said he wouldn’t back a law that added to the federal budget… but that’s not the only thing you should be concerned about. The medicine you take to keep you healthy has to go through a long journey, navigating through red tape and government bureaucrats. And it’s these obstacles that make them more and more expensive.

Watch this quick two minute video to see just how much money is wasted making sure your medicine is safe.