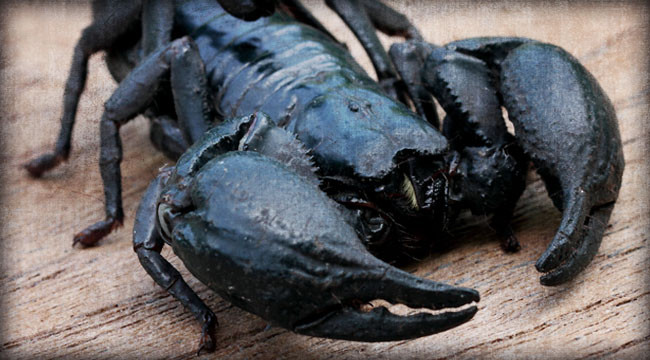 Scorpion Venom Sheds Light On How to Kill Cancer

You know what they say… “A bit of scorpion venom a day keeps the doctor away.”

At least, that’s what Dr. James Olson might say.

As the story goes, while studying at the University of Michigan, a professor asked Olson what he wanted to do with his life.

Olson replied, “I want to deliver light to cancer.”

To which the professor chuckled, “Okay, Buck Rogers… what is it that you really want to do?”

Ever since, Olson has been on a mission. And after 25 years of painstaking cancer research, he’s hit on a stunning breakthrough…

“Scorpions have been evolving for millions of years. For survival, they need to make a drug that can get into the brain and paralyze their prey.”

Any doctor will tell you that breaking terrible news to a patient is one of the most gut-wrenching conversations you can have.

Olson has certainly experienced his share over the course of his career.

One instance came after performing a 12-hour surgery on a young child’s brain.

The boy had a cancerous tumor that was so severe, it became almost impossible to differentiate the healthy brain matter from the cancerous matter.

With surgeries of this magnitude, even a man as experienced as Dr. Olson can encounter complications. It meant that not only was he unable to remove the entire tumor, he also couldn’t help taking out some non-cancerous matter with the portion he did remove. Sadly, it left the boy with brain damage.

With an organ as complex as the brain, this is sometimes an unavoidable outcome for some patients. They’re known as “iatrogenic injuries,” and they happen for two reasons: either by accident, or because of technological restraints.

In Olson’s case, it was the latter. And after the traumatic operation, he knew he needed to address such complications.

So he decided to pursue his dream of “delivering light to cancer.” And you won’t believe what’s helped him figure it out…

After several years of trial and error, Olson and his team at privately owned Seattle biotech firm, Blaze Bioscience, have created something called “tumor paint.” And the solution has come from the most unlikely of places…

As Olson states, “Scorpions have been evolving for millions of years. For survival, they need to make a drug that can get into the brain and paralyze their prey. The Israeli death stalker scorpion makes these little tough mini proteins, and it turns out that this one happens to bind to cancer cells, but not to normal tissues.”

The protein that Olson is describing is called chlorotoxin. It’s a major component of the venom injected from the sting of a scorpion’s tail.

Once it’s infused into the bloodstream, the venom naturally travels to the brain and attaches itself to chloride channels that lay on the surface of cells.

And as it turns out, chlorotoxin actually prefers the chloride channels on tumor cells above all other tissues.

Upon realizing this fascinating discovery, the Blaze Bioscience team re-engineered chlorotoxin. They tagged it with molecules that literally act like a flashlight for doctors.

It’s a fluorescent dye that illuminates the outline of the tumor in its entirety, making it easier for brain surgeons to operate without error – and remove all of the cancer.

All a surgeon needs to do is inject their patient with the tumor paint formula. The scorpion venom naturally seeks out the brain tumor cells, and the molecular flashlight makes the tumor glow with a brilliant light.

The surgeon can see the outline of the tumor in relation to the non-cancerous brain matter, and perform accordingly. 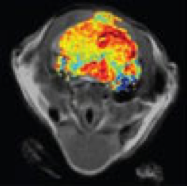 There’s another important aspect here, too.

Contrast that with current methods like an MRI scan, for example, where surgeons can only see if they’ve fully removed a tumor after a patient has been stitched back up.

Needless to say, that costs more time, more money, and the potential for more invasive surgery or chemotherapy if a portion of the tumor remains intact.

But with tumor paint, a surgeon can see immediately if he’s got the whole tumor before the end of the operation.

Blaze Bioscience calls its scorpion venom treatment BLZ-100 – and the company’s research is so revolutionary, it just scooped up a cool $8 million in Series-B financing from angel investors, in order to conduct further trials.

In fact, since the company’s inception, it’s had little trouble attracting financial backing.

That’s due in no small part to acting CEO, Heather Franklin – the executive who led ZymoGenetics before Bristol-Myers Squibb (BMY) bought the company back in 2010.

She’s already leading the tumor paint discovery from mice trials into human testing, as well as overseeing efforts to re-engineer tumor paint for use against other cancers – including prostate, colon, breast and ovarian.

The funding that Blaze is receiving has also allowed the company to recruit the added expertise of several doctors and pharmaceutical engineers, as it tries to advance BLZ-100 from the lab to every clinic in America.

We’re talking about people like Dr. Dennis Miller and Dr. Claudia Jochheim, both of whom have excellent track records in bringing new drug candidates to market. Their resumes include ZymoGenetics, Amgen (AMGN), Corixa and Immunex, to name a few.

Although Blaze is privately owned at the moment, as the profile rises on BLZ-100’s remarkable treatment, continued progress could see a bigger biotech firm join forces with the company – or even buy it outright.

This is, without question, a story that I’ll be keeping a close eye on. And naturally, I’ll bring you any updates as soon as they happen.

Your eyes in the Pipeline,

Marty Biancuzzo
for The Daily Reckoning

Ed. Note: As long as there are innovative scientists who aren’t afraid to “think outside the box” there is certainly hope for the future of cancer research. And those who believe and invest in these types of groundbreaking research could be rewarded handsomely. If you’re interested in becoming one of them, you can stay better informed with The Daily Reckoning email edition by signing up for FREE, right here.

Martin Biancuzzo is the Chief Technology Analyst at Tech & Innovation Daily. His technology research is among the most sought after in the industry. Since joining Tech & Innovation Daily, he’s broken news on some of the biggest market-moving catalysts of the year, including the digitization of city infrastructures, neuroengineering breakthroughs and the Twitter IPO. Martin’s work has been featured on Capitol Hill Daily, Wall Street Daily, MarketWatch, CNBC, Bloomberg and Forbes.