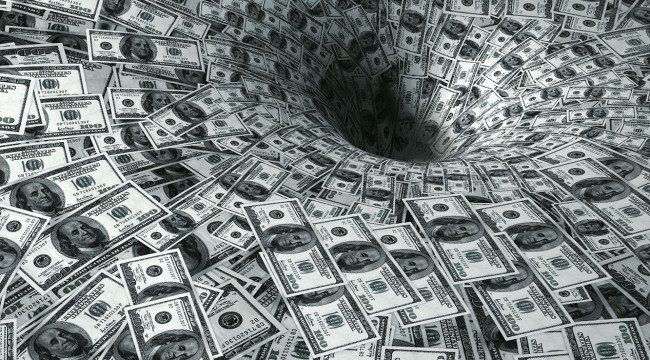 The Next Financial Collapse: An Update

Thanks to China’s devaluation this week, a $14 trillion debt tsunami looms closer to shore.

It was seven months ago today in The 5 that Jim Rickards first alerted us to “a $14 trillion pile of corporate debt that cannot possibly be repaid or rolled over under current economic conditions.”

That’s $5 trillion of junk bonds issued for energy exploration… plus $9 trillion more issued by companies in emerging markets, all of it denominated in dollars.

This week, the average price of dollar-denominated junk bonds tumbled to its lowest level since 2011 — 95.8 cents on the dollar. That compares with 101.3 cents in February.

From a Bloomberg account: “Debt of some energy companies, including Energy XXI Gulf Coast Inc. and SandRidge Energy Inc., fell more than 5% on Tuesday alone, Bank of America Merrill Lynch index data show. And China’s move deepened losses on obligations issued by U.S. metals and mining companies, which are already suffering their highest default rate since 2003.”

Essentially, if the devaluation is proof that China’s economy is slowing down, it’s bad news for commodity producers. More about that shortly…

“The high-yield bond market is having a coronary,” David Rosenberg tells CNBC.

Rosenberg was Merrill Lynch’s chief economist for years. More recently, he’s held forth at the boutique firm Gluskin Sheff. He’s one of the few mainstream economists worth listening to.

He points out the average yield on a junk bond has risen 1.2 percentage points in the last two months alone.

Result: Investors have pulled $3.43 billion out of the two biggest junk-bond ETFs since June 1.

We told you in mid-June how signs of stress were showing up in those ETFs. Hedge fund manager Erik Townsend was short selling 12,000 shares of HYG, the biggest junk-bond ETF — until his broker closed the position against his wishes. There weren’t enough shares available to borrow.

“If they can’t manage to find a single account with an open long in HYG (to borrow to back my short),” he told us, “what else does that imply about liquidity in the junk bond market?”

Again, the total is $14 trillion. “If default rates are only 10% — a conservative assumption — this corporate debt fiasco will be six times larger than the subprime losses in 2007.”

Here’s a chart of HYG going back to Jim’s warning on Jan. 14.

The stress can only continue to build. The $5 trillion in debt issued for energy exploration is further threatened this morning by oil at $42.33 — the lowest level since the darkest days of the 2008 financial crisis. And the $9 trillion in emerging-market debt denominated in dollars further is threatened by the dollar sitting at multiyear highs relative to other major currencies.

And into this volatile mix China devalues this week, firing a new shot in the currency wars? “China just darkened the future for riskier corporate credit around the world,” says the aforementioned Bloomberg story.