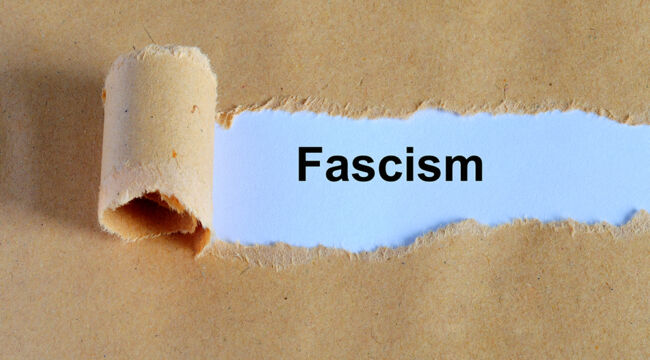 The Neo-Fascists Among Us

The Omicron variant of the SARS-CoV-2 virus that causes COVID is now firmly entrenched in the United States. That’s no surprise.

There’s a significant lag between the time a mutation first infects someone and when science identifies and isolates the new strain. In that gap, infected individuals inevitably travel or come in contact with others in such a way that the mutant virus spreads around the world before science even knows it exists.

Omicron is now present in 57 countries, but that number will soon be 90 and then 120. It’s also highly infectious. In the U.K. and South Africa, for example, cases are doubling every three to four days.

The bottom line is the virus goes where it wants. If you think lockdowns are the answer, think again. Ample evidence demonstrates that lockdowns simply don’t work.

All Pain, No Gain

Lockdowns don’t work to stop the spread of the virus because they keep people indoors where the virus can spread more easily. Outdoor activity is essential for fresh air, mental and physical health and exercise.

People will find a way to gather and interact even with lockdown rules. This means that lockdowns impose all of the economic costs with few of the supposed public health benefits.

This was recognized in a paper in 2006 by D.A. Henderson, the greatest virologist and epidemiologist of the 20th century, who led the successful effort to eradicate smallpox and won the U.S. Presidential Medal of Freedom.

He said lockdowns don’t work and provided detailed reasons why. Unfortunately, his award-winning work was ignored by politicians eager to appear to be doing something.

And don’t think that vaccines are the answer, either.

There were a total of 43 U.S. Omicron cases as of Dec. 11 (there are likely many more today). What’s interesting is that 79% of them were fully vaccinated and 14 had received booster shots.

Five of the 14 who received boosters had gotten them at least two weeks prior and should have had maximum immunity. They got infected anyway.

What do the numbers tell us?

As a first approximation, the vaccinated are more likely to get COVID through Omicron than the unvaccinated, although this sample size is small. But what this data shows beyond doubt is that vaccines do not prevent COVID infections and that this is not a pandemic of the unvaccinated.

The vaccinated and unvaccinated are equally likely to become infected and to spread the virus.

But here’s the good news: While the Omicron variant appears to be more contagious than earlier variants, it’s also less lethal. It may even mark the end of the pandemic as infections provide immunity without high costs in terms of hospitalization and death. That’s how pandemics end.

We’re at the stage where we can learn to live with COVID as we do with many other endemic diseases such as the seasonal flu. There’s no reason for fear. Unfortunately, government authorities continue to insist they can control the situation with orders and mandates.

COVID can be lethal and imposes costs, but it’s not the end of the world. Survival rates for all groups are 99.2%, and for those under 65 who are not obese or have other comorbidities, the survival rate is 99.8%.

Meanwhile, multiple studies show that early treatment with drugs like hydroxychloroquine and ivermectin (among others) slashes the chances of hospitalization and death. In other words, COVID is highly treatable unless sufferers wait until they have trouble breathing before seeking treatment, which has shamefully been the advice of the CDC.

Still, in their obsession to force vaccinations with gene-modification therapies (mRNA) from Moderna and Pfizer, the government and mainstream media have trashed ivermectin as a “horse dewormer” and something used only by veterinarians.

This type of lying and propaganda has cost many lives, maybe hundreds of thousands.

The question is why? Besides discouraging cheap, lifesaving medications, bureaucrats and politicians are persecuting the unvaccinated, imposing unneeded vax mandates and ignoring natural immunity held by almost 50 million Americans who have recovered from COVID. Why?

The recent pandemic seems to have caused a Covid Derangement Syndrome in government leaders.

They haven’t learned any lessons from the past year. They’re reimposing useless or counterproductive policies that destroy economies, abuse children with masks and school closures and needlessly trample on individual rights.

In places like Austria and Germany, they’re imposing strict lockdowns once again.

Leaving aside the fact that vaccinations don’t stop infection and don’t stop the spread of the virus, this is a violation of the Nuremberg Code adopted after World War II to prevent involuntary experimentation on humans of the kind carried out by the Nazis.

Despite government approvals, the vaccines are still experimental because long-term studies on efficacy and side effects have not been completed. The fact that the head of the EU hasn’t learned anything from the horrors of Nazi experimentation on humans is highly disturbing.

Over in the U.K., one psychology professor likens the unvaccinated to “terrorists.” He argues that “hardcore vaccine refuseniks” need to be “deradicalized” like terrorists. They need to be “punished” and of course subjected to vaccine mandates.

Some politicians are just stupid and do what they’re told by corrupt public health officials. Some politicians know better but consider it politically expedient to “do something” even if the something makes no sense.

But most disturbing are those politicians who harbor a neo-fascist impulse. They’re using the pandemic to induce fear and intimidate the population into following orders and doing what they’re told. They just can’t tolerate independent citizens making their own decisions.

I realize that “fascist” is a very strong word with powerful connotations. It may seem paranoid or hysterical, but it’s not. It perfectly describes a certain type of politician. The pandemic has merely ripped their masks off, exposing them for who they truly are.

The problem with the neo-fascist impulse is that it never goes away. That means the pandemic will never go away in the official sense because that would deprive these neo-fascists of their cover to pursue their political agenda of fear and control.

Again, that’s not being paranoid. It’s an objective assessment.

This neo-fascism goes beyond COVID. In some ways, the pandemic is a test run for draconian climate policies.

Global elites see the COVID pandemic and climate alarm as a two-headed Trojan Horse that can be used to foist global taxation and heavy regulations on a global population who have suddenly become accustomed to following government orders.

If populations can successfully resist vaccine mandates and other strict measures, then globalists fear they’ll rebel against restrictive climate policies.

Their real agenda is to define a “global problem” so they can advance “global solutions” such as world governance, world taxation and world rule by elites. It doesn’t matter that the actual science behind lockdowns, vaccine mandates or hysterical climate alarmism is extremely weak.

I’m a macroeconomic analyst, so why am I writing about public health and climate policies?

The answer is because they have real-world consequences for the economy. Poor policy choices have already cost trillions of dollars, and that number will certainly grow in the future if the neo-fascists get their way.

With weak growth, government spending out of control and debt rising at alarming rates, we’re likely heading for an economic crisis sooner or later.

Until citizens stand up to the petty dictators around us, the pandemic will never be over and life will never return to normal. It’ll only set the stage for more tyranny in the future.

The choice between more intimidation and more freedom, economic and otherwise, has rarely been more clear.