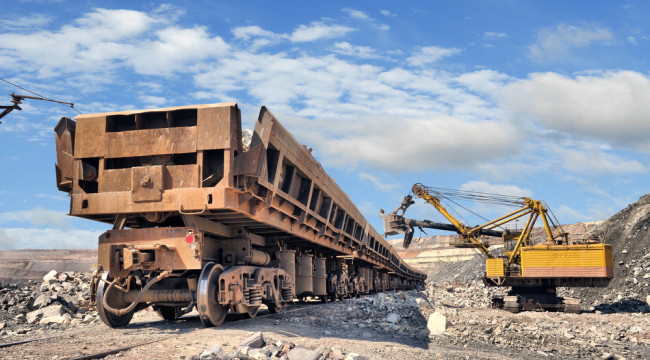 The Lull Before The Storm - An Ideal Chance to Exit the Casino, Part 1

Sunday night’s Asian action brought another warning that the global deflation cycle is accelerating. Iron ore broke below $40 per ton for the first time since the central banks kicked off the world’s credit based growth binge two decades ago; it’s now down 40% this year and 80% from its 2011-212 peak. 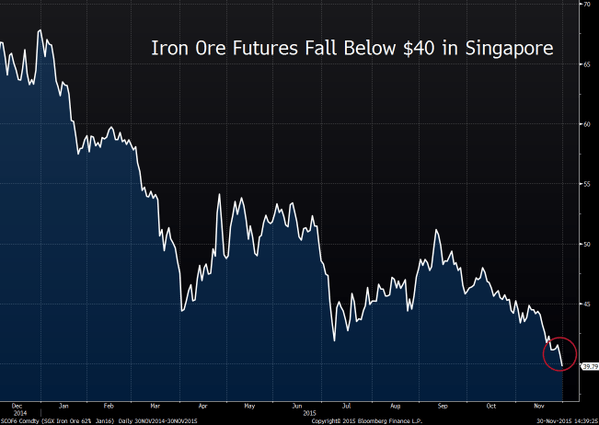 As the man said, however, you ain’t seen nothin’ yet. That’s because the above chart is not merely reflective of too much supply and capacity growth enthusiasm in the iron ore industry or even some kind of worldwide commodity super-cycle that has gone bust.

Instead, the iron ore implosion is symptomatic of a much deeper and more destructive malady. Namely, it reflects the monumental malinvestment generated by two decades of rampant credit expansion and falsification of debt and equity prices by the world’s convoy of money printing central banks.

Since 1994 the aggregate balance sheet of the world’s central banks has expanded by 10X—— rising from $2.1 trillion to $21 trillion over the period. This rise does not measure any kind of ordinary trend which temporarily got out of hand; it represents an outbreak of monetary insanity that is something totally new under the sun.

What it means is that the Fed, ECB, BOJ, People’s Bank of China (PBOC) and the manifold lesser central banks purchased $19 trillion of government bonds, corporate debt, ETFs and even individual equities and paid for it by hitting the electronic “print” button on their respective financial ledgers.

This central bank balance sheet expansion, in fact, represented 70% of the world’s entire GDP as of the time the print-fest began in 1994. Yet as an accounting matter this monumental expansion was inherently suspect .

That’s because the asset side was mushroomed by the acquisition of already existing assets——-financial claims which had originally funded the purchase of real goods and services.

By contrast, the equal and opposite liability side expansion consisted of newly bottled monetary credit conjured from thin air; it represented nothing of tangible value, and most especially not savings obtained from the prior production of real economic output.

Stated differently, the central banks substituted $19 trillion of fiat credit for $19 trillion of real savings from current income that would have otherwise been required to fund debt and equity issued by businesses, households and governments during the last two decades.

Needless to say, this giant substitution drastically falsified the price of money and capital. It represented a big fat bid in the financial markets that drove cap rates to deeply sub-economic levels, meaning that bond yields were far too low and equity prices and PE ratios way too high.

Had the world economy tried to issue trillions of new securities and loans in the absence of this massive central bank balance sheet expansion, interest rates would have soared and PE ratios would have weakened, thereby short-circuiting the reckless expansion of finance which actually occurred.

In short, the torrid pace of central bank bond buying during the last 20 years has caused the global economy to become bloated with over-financialization.

In the case of debt, for example, the expansion ratio was nearly 4X. That is, total worldwide public and private debt outstanding soared from $40 trillion to $225 trillion. This astounding $185 trillion gain compared to just a $50 trillion gain in GDP, meaning that the world’s leverage ratio has soared to unprecedented heights. 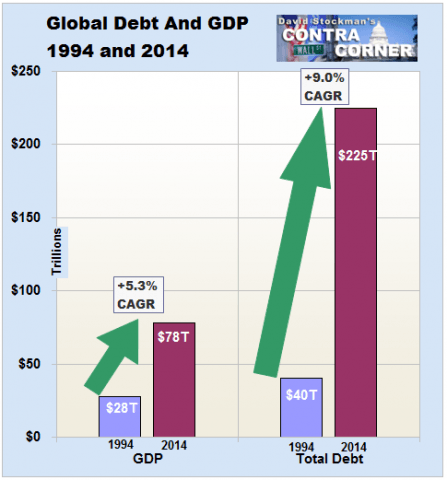 The expansion of equity capital on the traded stock markets of the world showed the same trend. Global equity market cap rose by $60 trillion or at a 11% annual rate during the two decades through the May 2015 peak. That was more than double the 5.0% growth rate of nominal GDP, meaning that the implicit capitalization rate of world income was soaring——even as the world economy was being bloated and deformed by the greatest credit bubble ever imagined. 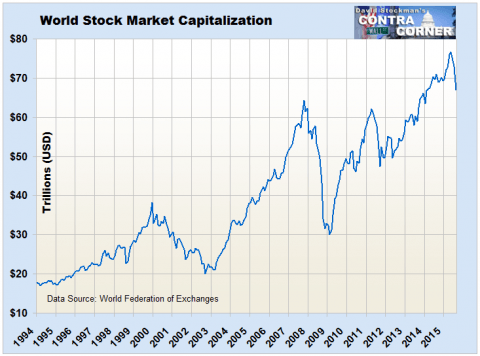 But it was not healthy, sustainable CapEx because the underlying debt and equity which financed it—– a 5X surge in listed company investment during this period—– was drastically under-priced. Consequently, the world is now drowning in uneconomic, excess capacity along the entire food chain of production—–mining, bulk shipping, manufacturing, warehousing, containerships and air freight and downstream distribution.

The collapse of iron ore mining in Australia and shale drilling in North Dakota alike, therefore, denote not just traditional commodity cycles in petroleum and steel. They mark the arrival of what will be a long-running CapEx depression that will shrink final demand for energy and steel products for years to come.

The chart below  purports to show a difficult outlook for iron ore prices in the next several years owing to an expected further reduction of demand, while supply is expected to grow by another 5% through 2017 owing to the completion of projects already in the pipeline.

But that is wishful mainstream thinking. In fact, all the major sources of steel demand are in deep contraction. World shipbuilding is coming to a screeching halt; industrial infrastructure building in Brazil, Turkey and throughout the EM economies is in freefall; and China’s credit Ponzi, which generated massive overinvestment in apartment buildings, industrial production and public infrastructure, is visibly toppling.

Accordingly, global iron-ore demand is likely to plunge by 20%, not 2% as shown in the graph. Prices are therefore heading far lower, perhaps into the $20 per ton range. There will be unprecedented, sweeping bankruptcies in the global metals industries and a multiplier effect among adjacent supplier sectors. 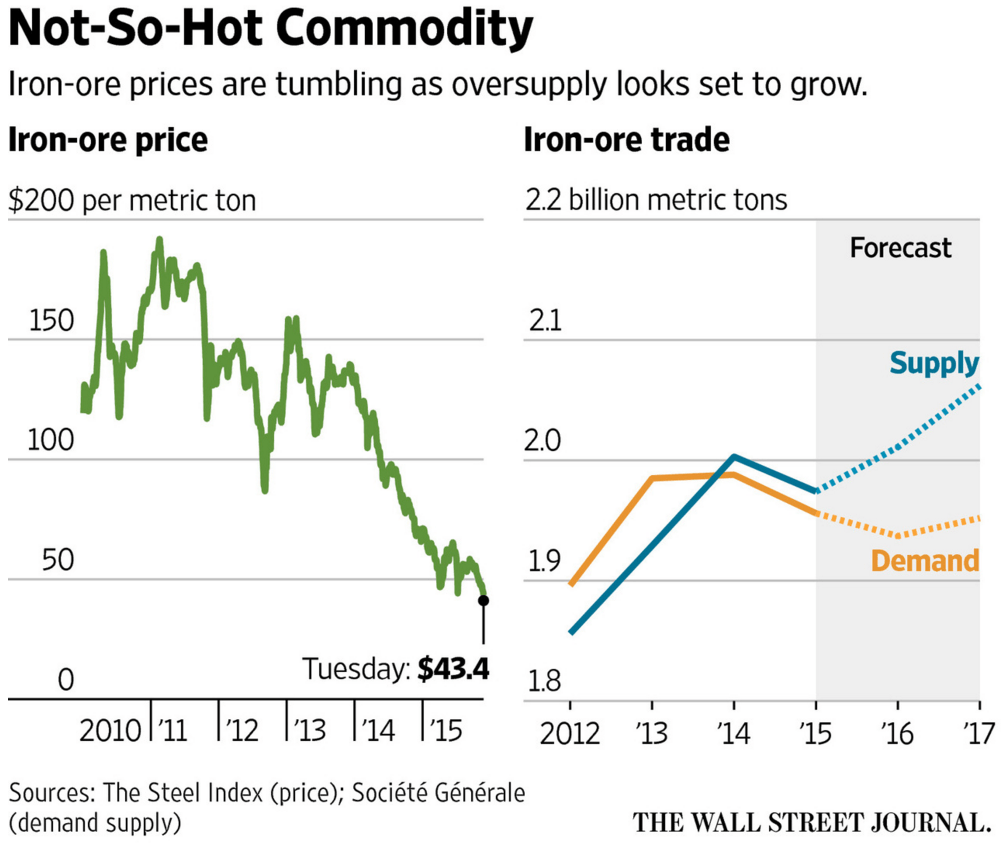 This implosion of demand cannot be remedied with another round of central bank money printing because the world is already at peak debt. Consequently, the global corporate profit cycle is heading into a deep downturn——just as the equity markets go into a final spasm of levitation based on a handful of still rising big cap stocks.

“It [Omicron] will of course be used as an argument for more stimulus ahead”… Europe locks down again. Will the U.S. follow?… “It is the vaccination that is creating the variants”…

“It [Omicron] will of course be used as an argument for more stimulus ahead”… Europe locks down again. Will the U.S. follow?… “It is the vaccination that is creating the variants”…