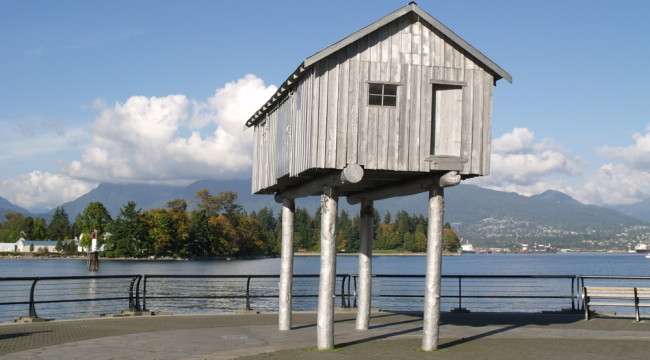 The Joke Shack of the Housing Sector

It’s not often you hear one executive call another business “a joke.” But it happened on a second-quarter earnings call this July.

The target of this criticism is the new crop of publicly traded single-family rental REITs. (REITs, or real estate investment trusts, are companies that own and manage real estate.) Before December of last year, there was no such thing. Now there are three, with more on the way.

Do these vehicles deserve a spot in your portfolio? I’m going to make the case that they do not.

I say this as someone who has been a housing bull. I still think housing is OK, but not as attractive as it was. The investment case for rental homes was plain and I made the case a number of times in these pages in 2011 and 2012. I even bought a rental property for myself. And it’s worked out very well so far. I was far from the only one who saw such an opportunity.

Wayne Hughes saw the opportunity as well. He is a 79-year-old Malibu-based billionaire and founder of Public Storage, one of the largest REITs in the country. Hughes, who has seen the passing of many market suns, said, “I’ve seen a lot of property types. And I’ve seen deals where you buy below replacement cost. But I never have seen anything like this. You buy the house for less than the cost to build it, and you get the land free.”

Hughes founded American Homes 4 Rent in 2011 to take advantage of those deals. This year, it went public. It joins Silver Bay Realty Trust and American Residential Properties (which owns about 4,000 homes) as the publicly traded stocks in this new sector. More are on the way. 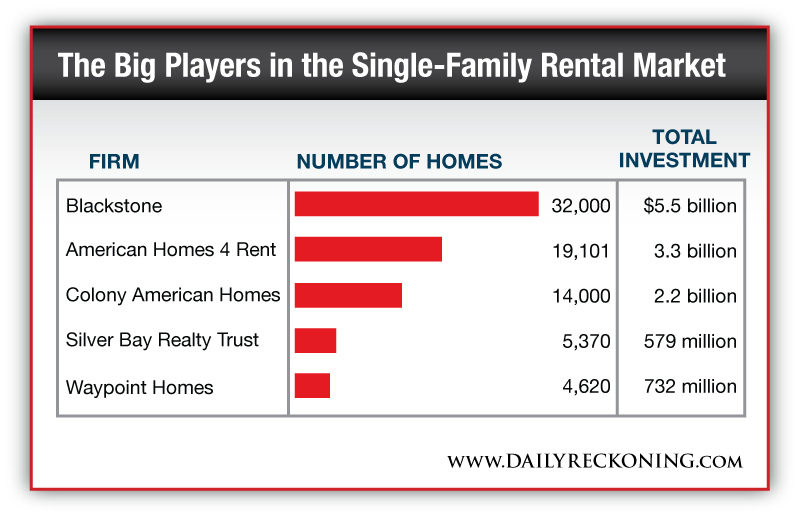 Silver Bay was the first. It went public in December. I panned it in my January Capital & Crisis letter. That was a good call, as the stock fell about 25% — in a rising market, no less!

My main objection is that I don’t think running a portfolio of thousands of single-family homes is going to be profitable enough to make it worthwhile to run as a public company. It looks like a dog of a business to me. First, you layer on the costs of being public. You need a management team. They will get stock options, big salaries and perks. You need a legal team, compliance, human resources and the rest of the bureaucracy.

Then there is the sheer logistical nightmare of trying to manage thousands of homes across a number of states. It is not like running apartments, which is a proven business model in a public wrapper.

“I think that these claims that [single-family renters] are going to operate with the same margins as multifamily, it’s just a joke.”

Recently, I listened in on the second-quarter conference call of Equity Residential, which is a publicly traded apartment REIT. As I noted earlier, the apartment (or multifamily) stocks are beaten down and look interesting. Anyway, the CEO is David Neithercut. On the call, someone asked him what he thought about the single-family rental business. He did not mince words.

“I think that they will be more challenging to manage than people think. I think that it’s likely they will underestimate tenant credit quality, turn costs [i.e., cleaning, painting, repair], re-leasing expenses, capex [or capital expenditures] and maintenance… Not that it can’t be done, but the notion that it can be done as efficiently and with the same profit margins as apartments is comical.”

Neithercut cited a good example of how scale is important. Equity Residential used to own the Lexford portfolio. The apartment buildings in this portfolio were small, averaging only 88 units. “Believe me,” Neithercut said, “the profit margins on the Lexford portfolio were nothing like the margins that we enjoy in our high-density urban assets. So I think that these claims that [single-family renters] are going to operate with the same margins as multifamily, it’s just a joke.”

You might dismiss him as an interested party, since indirectly you may think he competes with single-family landlords. But they are two different markets. The overlap is not that great.

I’ll cite another executive of a multifamily REIT: Keith Oden at Camden Property Trust. He also gave his opinion on his second-quarter conference call. Oden said his firm “spent a lot of time and energy… about a year and a half ago” trying to figure out the single-family puzzle.

Oden made some pithy observations about the economics of single-family housing that he thinks are lost in the discussion. This is worth sharing:

“If you look at the models that people are trooping around… you see that they’re using $500 for capex [or capital expenditures] for a single-family home turn. That’s just astonishing. The number could be five times that by the time you rip the carpet out and replace the Sheetrock. And you’re going to have 10% or 15% skips and evictions. There’s no way you’re not. And how do you know when they left and how do you know what they took? I just think the numbers are silly on the capex side.”

Oden, like Neithercut, sounded like a tough apartment operator, shorn of illusions about what can be done.

The housing stocks also come public with a lot of work to do. Many of their homes are empty. Most rental home companies have vacancy rates of 50%, according to The Wall Street Journal. American Homes 4 Rent, for example, had a 42% vacancy rate. As one investment banker put: “You don’t see REITs in any other sector coming public when they’re not fully occupied.”

Perhaps the only way these new housing stocks work is if they can cash in on a surge in housing prices down the road. That’s no sure thing, especially since prices have already moved a lot and the best deals have long since passed. And they will likely have to contend with rising mortgage rates.

To me, the stocks — which have all come down after going public — may look reasonable on an asset basis. If you look at what they paid to acquire their homes, you’ll find the stocks trade close to that figure or even below it. But an asset that does not generate a minimum acceptable cash return does not deserve a premium — and may, in fact, warrant a discount.

Count me a skeptic on these housing REITs. There are better investment opportunities out there.