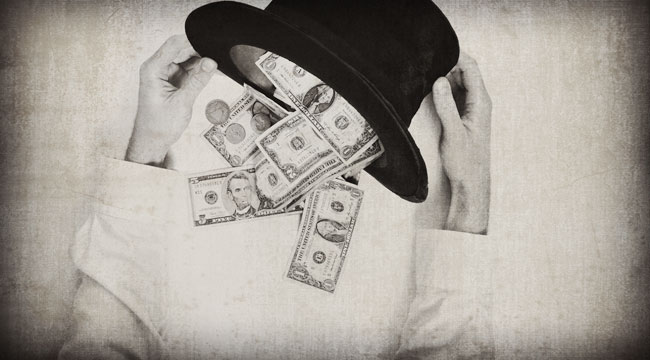 The Illusion of Growth

Indeed, this lazy cheerleading excuse for journalism captured the sum and substance of why the punters keep buying the dips despite troubles gathering all around.

That is, as the tax bill falters, the crusade to remove the Donald from office gathers strength, the Fed moves into balance sheet normalization and instability breaks out all over the world from the Persian Gulf to the Korean peninsula.

You would think the title says it all, but the WSJ was not nearly done. It cited a 156,000 pick-up in manufacturing employment since last November, rising energy and commodity prices as evidence of a booming global economy and double digit growth in business investment earlier this year, among other things.

American manufacturing has picked up pace over the last 12 months thanks to steady global economic growth, a rise in energy and other commodity prices, and increased business confidence.

Although progress isn’t being felt by all industries, makers of items ranging from bulldozers to semiconductors to food products are on the upswing as various measures of spending, sentiment and employment have climbed, while stock markets have hit record highs.

Yet every one of the trends cited in the WSJ article are less than a year-old. They coincide with the Great Coronation Boom in the Red Ponzi ( the run-up to Xi Jinping’s ascension to total power at the 19th Party Congress); represent only a minor up-tick from the 2014-2015 global deflation; and in the context of the current feeble recovery from the 2008 crisis represent nothing at all to write home about.

Indeed, I am confident that as the Red Ponzi goes into a stabilization and credit containment mode, as is already evident from the October economic data (fudged as it is), that the slight lift to global activity engendered by the latest China credit impulse will quickly fade. And with it the entire trading meme reflected in that WSJ puff piece.

But short of that yet to unfold but predictable global mini-cycle, the actual data on U.S. manufacturing output trends through September reveal nothing to smile about.

In fact, overall U.S. manufacturing production is still down 4.3% from its pre-crisis high back in December 2007, and was no higher last month than it was three years ago in November 2014.

Of course, global commodity prices did perk up during the last 18 months. Not only did they rebound off the bottom in normal cyclical fashion, but the hands of China’s central bank were more than a little evident.

When they unleashed the latest credit tsunami in early 2016, the hordes of Chinese speculators dutifully bought up all the iron ore, copper, steel, diesel fuel etc that was to be had and which could be readily financed in cash and futures markets alike.

Presently, they will be selling, too, as the post-coronation signals coming out of Beijing become unmistakably clear.

Nor is the above even the half of it. If you look at output of U.S. consumer goods, which is much less attached to the global commodity/industrial cycle, the rising tide of manufacturing output is nowhere to be seen.

In fact, consumer goods production has flat-lined for the last two years, and is still below where it was at the pre-crisis peak.

The same is true of manufacturing employment. There is no “rising tide.” Thus, between October 2007 and the April 2010 bottom, the U.S. lost 2.3 million manufacturing jobs — representing a loss of 76,000 high paying jobs per month.

By contrast, during the three years since October 2014, the U.S. has recovered about one-tenth of that loss — with manufacturing jobs expanding at a rate of  just 6,000 per month. That is to say, the WSJ was essentially trumpeting statistical noise.

We are now 120 months from the pre-crisis peak in November 2007. Yet the compound annual growth rate of manufacturing is just 0.08%. Which is to say, nothing.

By contrast, every prior peak-to-peak recovery pales that tiny beep of white noise into insignificance. Thus, between July 1981 and the July 1990 peaks, industrial production expanded at 2.18% a year during the so-called Reagan boom.

Likewise, during the Greenspan tech boom of the 1990s, the compound annual growth rate (CAGR) for industrial production was 4.02%. Even during the highly artificial and unsustainable Greenspan housing boom between December 2000 and November 2007, the index rose at a rate of 1.31% per year.

So Thursday’s industrial production number for October actually signaled that the U.S. industrial economy remains dead in the water. It is floundering in a manner that is off the historical charts — and not in a good way.

In short, financial information has been totally corrupted by the distortions of monetary central planning. Accordingly, when the third and greatest financial bubble of the 21st century collapses — and it is coming soon — it will also arrive as a great surprise.

As I keep insisting, monetary central planning systematically falsifies asset prices and corrupts the flow of financial information. That’s why bubbles seemingly inflate endlessly and massively, and also why financial crashes and economic corrections appear to come out of the blue without warning.

Back in the winter of 1999-2000, for example, we were allegedly in the midst of a “new age economy.” The revolution in technology then underway, it was claimed, meant all historic valuation benchmarks — like P/E multiples, cash flow and book values — were irrelevant to stock prices.

Likewise, in the fall of 2007 there was nary a cloud in the economic skies. That’s because the Great Moderation led by the geniuses at the Fed had purportedly engendered a “goldilocks” economy destined to expand indefinitely.

Within months of the dotcom epiphanies, however, the highflying NASDAQ 100 crashed — eventually hitting bottom 83% below its new age heights. And 15 months after the S&P 500 reached its goldilocks peak of 1570 in October 2007 it staggered around in smoldering ruins at 670 — down 57% from its housing bubble high.

Today, the so-called stock market now consists entirely of what amounts to day traders and HST (high speed trading) machines. There is no “price discovery” in the classic sense of divining the true economic and political fundamentals. The casino has become entirely a ward of the central banks.

Needless to say, we are again on the precipice of a crash and correction that no one sees coming, but this one has an added twist.

Namely, three strikes and you are out!

What I mean, of course, is that the Fed and other central banks are out of dry powder. They are now stranded near the zero bound with bloated balance sheets that have actually reached hideous girth relative to current GDP and all historical experience — meaning they will have almost no capacity to reflate the next busted bubble, as they quickly did in 2001 and 2009.

Do yourself a favor and get out of the casino now.