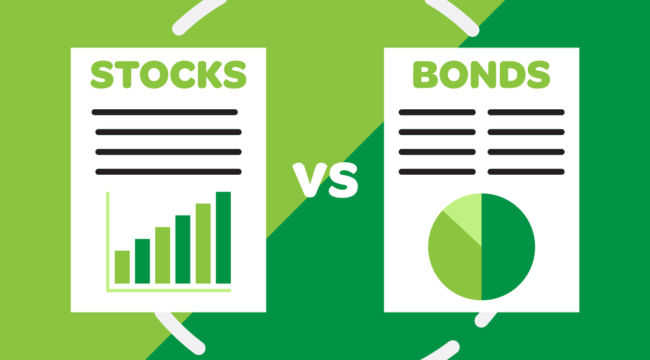 Two options rise before us this day…

The stock market is cheery and confident. It presently goes at record heights… and bursts with belief in a superior tomorrow.

Moreover, it has a decade of nearly unbroken prosperity in back of it.

The bond market — meantime — is dark, dour, down in the mouth.

A lean season is ahead then, the bond market struggles to say above the dinning stock market.

Pit the one against the other, stock versus bond. No compromise, no truce, can sink their differences. They are too vast.

As well ask Hatfield and McCoy to share a kiss…

As well ask the two poles of Earth to join at the equator.

That is, as well request the impossible.

As economist David Rosenberg styles it:

Both bonds and stocks can’t be right at this moment in time. We have to choose which asset class has the story right…

Which asset class has the story right — stock or bond?

Yet today we blindfold our eyes, hold the scales of justice even… and grant each side an impartial hearing.

The stock market rises to read its opening statement…

Why Shouldn’t the Stock Market Be Setting Records?

It insists the facts justify its optimism in full.

It reminds the court that unemployment scarcely has existence, that real wages are increasing, that January manufacturing jumped, that productivity is on its legs again.

The stock market is simply a mirror of these fabulous facts, it insists.

We must concede, the evidence produced has anchors in truth…

Unemployment hovers near record depths, at 3.6%. And 2019 witnessed America’s greatest productivity gains since 2009.

What is more, real hourly wages (inflation-adjusted, that is) expanded last year at the greatest rate since 2015.

Meantime, the Institute for Supply Management claims its January index of American factory activity came in at 50.9 — up from December’s 47.8.

Any number above 50 indicates a manufacturing expansion, a blossoming.

But the bond market thunders to its feet, and files a blistering objection…

Set aside the fact the United States Bureau of Labor is an agency of torture — that it twists, contorts, batters and gouges the numbers into false confessions.

Accept the 3.6% unemployment rate as truth, the bond market allows in generosity.

Unemployment sagged below 4% in April 2000, it reminds us — at the peak of the dot-com derangement.

The economy was in recession by March 2001… less than one year later.

The economy dropped into recession that same month… where it remained until November 1970.

Be not deceived then by today’s gaudy unemployment figure. It gives a false confidence, argues the bond market.

With the serenity of a card sharp with an ace card up its shirtsleeve, this market then summons a certain Nicole Smith to the witness stand…

Under examination she reveals:

We steal a furtive glance at the stock market. It is sunken in its chair, beads of perspiration forming about its forehead. It reaches for a glass of water.

Next we come to the alleged productivity surge.

The bond market will allow that United States productivity expanded 1.8% last year. Yet it is eager to remind the court…

That productivity still runs substantially beneath the 2.1% average prevailing since the Second World War.

And that the current expansion’s annual productivity gains average a marginally productive 1.3%.

The bond market demands to see more before budging from its skepticism.

It concedes the January index broke above the critical 50 threshold.

But it reminds us that manufacturing was in actual recession for all 2019 — all of it, January–December.

It will not permit a random lurch in the chart to fox it, to trick it. Once again, the bond market insists upon further evidence.

Finally the bond market calls upon its star witness: the yield curve.

As we have explained before…

The yield curve is simply the difference between short-term and long-term interest rates.

Investors, as a result, demand greater compensation to hold a 10-year Treasury than a 3-month Treasury.

But when the 3-month yield and the 10-year yield begin to converge… the yield curve flattens.

And a flattening yield curve is a possible omen of lean times.

But the true menace is when the yield curve inverts — when long-term yields actually slip beneath short-term yields..

Only once did it yell wolf — in the mid-1960s. And the yield curve is giving off another alarm.

“The U.S. Yield Curve Is Flirting with Another Broad-based Inversion”

The U.S. yield curve is flirting with another broad-based inversion, reigniting Wall Street fears over the fate of the American economy… After a respite early last week, the curve is once again flattening, with the spread between yields on 3-month and 10-year Treasuries inverting once more on Monday. This followed an earlier inversion starting Jan. 30 that was caused by growing angst about the coronavirus and an equity sell-off.

Yet an inverted yield curve is not necessarily an immediate scourge. History reveals its dire effects may not manifest for 12–18 months — or longer.

The curve has inverted at various periods over the past two years, incidentally.

But the bond market rests its case. In summation, it argues the stock market gives a dreadfully inaccurate reading of economic health.

It cites the aforesaid David Rosenberg:

Never before has there been such a loose relationship to economic growth… this is a stock market that is being driven by flows rather than by economic fundamentals.

At this point we recall Mr. Rosenberg’s previous statement:

Both bonds and stocks can’t be right at this moment in time. We have to choose which asset class has the story right…

And which asset class has the story right, in his estimate?

“History sides with the Treasury market.”

We are forced to agree.

The bond market will let you know where the economy is heading, say the veterans.

Savvy economic analysts have always known the bond market is the place to look for a real sense of where the economy is going, or at least where the smart money thinks it is going.

We must rule, therefore, in favor of the bond market. The coronavirus only reinforces our judgment.

The stock market will naturally appeal its case to a higher court.

And yes — we freely concede — it may even win…