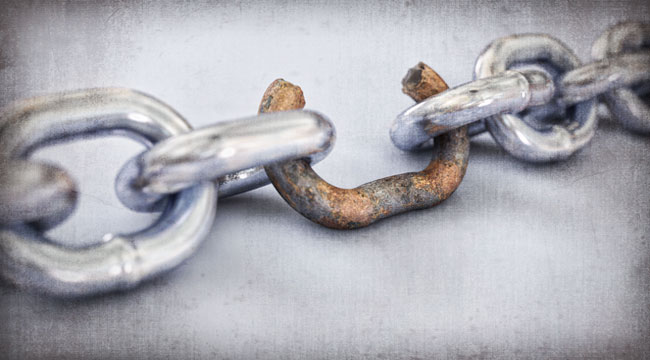 The German bund yield soared like a rocket yesterday. After touching on the truly lunatic rate of 0.05% only a few weeks back, it crossed the .60% marker. When a blue chip 10-year bond widely held on at 95% repo leverage moves that far that fast — there is some heavy duty furniture breakage happening in fast money land.

But don’t cry for the bond market gamblers. They already made a killing front-running the European Central Bank. During the 16 months between January 2014 and the April peak, speculators in German 10-year bunds would have made a 350% profit using essentially zero cost repo funding.

In the last few days they have given a tad of that back while making a beeline for the exit: 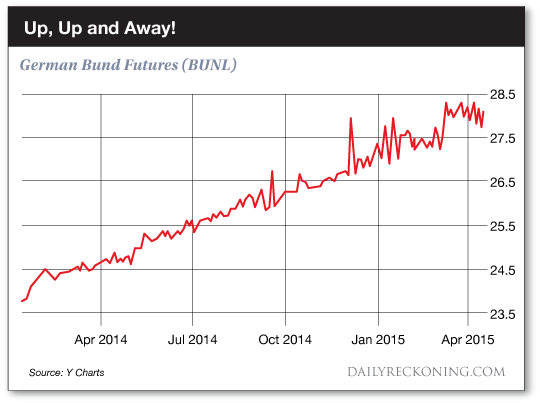 Yet during the uninterrupted march of the German bund into the monetary Valhalla depicted above, how many times did you hear that the market was merely “pricing in” a flight to quality among investors and the dreaded specter of “deflation.” That is, what amounted to sheer lunacy — valuing a 10-year government bond at a deeply negative after-tax and after-inflation yield — was attributed to rational economic factors.

But it wasn’t due to rational factors. The manic drive to .05% yield was pure speculative caprice, triggered by the ECB’s public pledge to corner the market in German government debt.

What gambler in his right mind would not buy hand over fist when a central bank with a printing press makes an attempt to corner the market — especially one managed by a dim bulb apparatchik like Mario Draghi!

Never has an agency of a state anywhere on the planet pleasured speculators with such stupendous windfalls. Any day now we will hear from the talking heads on CNBC that, no, massive bond buying by central banks does not repress or distort interest rates because once Europe’s quantitative easing (QE) started, rates actually backed up. And, furthermore, they’ll say this is entirely logical because QE will enable the economy to escape its deflationary trap, meaning that investors are discounting an imminent resurgence of growth!

When investors — if there are any such naïve waifs left — start down the rabbit hole believing that markets and economics are still connected in a historically orthodox manner, they will eventually run smack into something a lot more ferocious than a rabbit. Namely, the next bear market crash. That’s the inexorable end game of a financial system in which price discovery has been totally extinguished.

In today’s central bank dominated casinos, bad news is not priced in slowly as its scope and timing become more defined. Instead, bad news is priced-in suddenly and violently. It happens when even the fast money gamblers conclude that the pricing has reached irrationally exuberant extremes that even the central banks cannot sustain.

That’s what’s now happening to the German bund, the Italian bond, the U.S. Treasury note and most all else in the $100 billion global bond market. The front-runners are cashing out. The vast falsification of pricing fostered by the central banks is unraveling upon its own perilous extreme.

Like in the case of the Fed’s QE phases, it was mostly all over except the shouting when the ECB’s bond-buying campaign actually commenced in early March. By then the front-runners had done their work of accumulating vast inventories of bonds to sell back to the respective national central banks at far higher prices than they had paid.

What’s left now is for the euro-market gamblers to unload their stashes to the sucker with the dumbest bid in the casino. Namely, the geniuses in Frankfurt who apparently believe that if you tax an economy to 50% of income and then bury its consumers, producers and taxpayers alike under endless heapings of debt, that you can make growth accelerate by injecting $1.3 trillion of fraudulent credit conjured from thin air into the casino.

In fact, today’s bund and treasury dumpers are piling into other short-run speculations like oil futures and busted shale names. Soon the rabbit hole dwellers will pronounce that the oil bottom is in and all is awesome in the forward outlook for growth and profits.

Here’s the problem. It’s the same, universal problem that afflicts the fixed income markets. To wit, any and all of the “incoming data” on the economy is badly distorted and deformed owing to the global falsification of financial prices by the central banks.

For example, this week they stuck the proverbial fork in the GDP “escape velocity” myth not only owing to the 0.2% posting for Q1 GDP, but more especially due to the thundering March collapse in the non-oil trade deficit. The latter “unexpected” data shock will clearly drive Q1 into negative GDP growth, even as Q2 struggles with the massive overhang of excess inventories that have been building for more than a year.

Yet the Wall Street economists and strategists did not see it coming because they view today’s tortured data through the false lens of 50 years’ worth of business cycle data patterns. In that vein, one prong of the recovery has been the strong growth of U.S. exports during recent years. It now turns out, however, that the rising numbers were largely an artifact of the false global boom in industrial activity spurred by the central bank printing presses.

Now that boom is cooling rapidly, as every new release from China and other EM economies like Brazil make clear. Consequently, it seems that the U.S. economy had not regained its mojo as an industrial materials supplier, after all. There was just a temporary shortage of petrochemical feedstock and scrap metal, for example, that has now disappeared.

As shown below, just in the last two quarters, U.S. exports of industrial supplies and materials have dropped by nearly $100 billion or 20% at annualized rates. 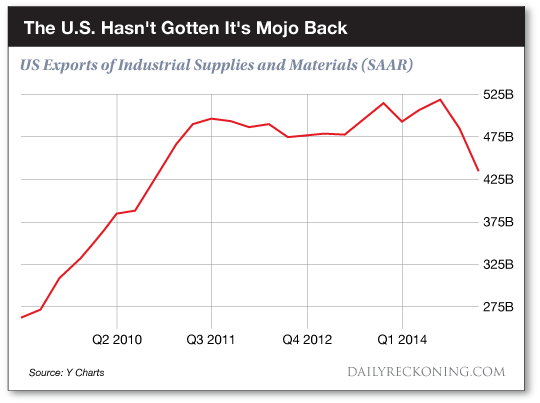 And there is a lot more where that came from. The collapse of oil drilling rigs from 1,600 as recently as October to hardly 700 in April is only a leading indicator of the impending collapse in capex, where the modest recovery since 2009 has been heavily dependent upon the energy sector.

In short, the bond market is now cracking as the mother of all bubbles reaches its apex. Likewise, the risk asset markets generally are likely not far behind.

None of this is “expected” by the Wall Street talking heads, of course. They are still in the rabbit hole combing through economic data archives that are utterly disconnected from the “markets” they claim to explain.

What matters now is what the central banks do next. Having painted themselves into an impossible corner of junk Keynesian economics, they are now clueless about how to get out.

It’s time to recognize that there has been a monetary regime change. The Fed might well have been your friend since March 2009 or even for the last several decades. But stranded on the zero bound and smothered by a $22 trillion collective balance sheet, the central banks of the world are now fast becoming your fiend.