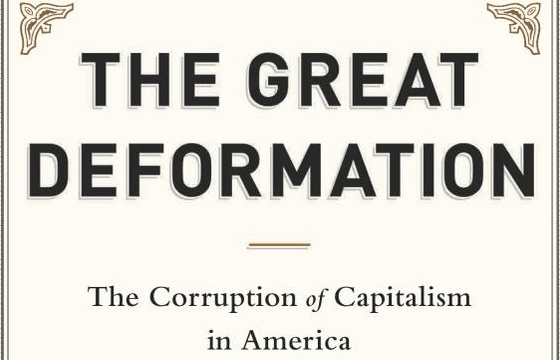 The "Great Deformation" of American Capitalism

American capitalism is in grave danger.

Its vital core — capital and money markets — have been turned into dangerous, unstable casinos.

This will continue until the central bank-driven financial bubble bursts. We’ve seen this happen twice in the last 15 years. Each time, Washington calls on Main Street taxpayers to bail out Wall Street speculators.

Our monetary politburo is out of business. “Monetary accommodation” is nothing more than a one-time parlor trick of central bankers.

Unfortunately, like the politburo in the Kremlin, the incumbents in the Eccles Building will not stop until they are finally chased from office by a massive uprising of the people. That is, the savers, workers and entrepreneurs of America who have been shafted by the bubble finance policies of our monetary central planners.

We’re in the crack-up phase. So four things are going to shape the way the economy and the markets unfold as we go forward.

First, you are going to see increasing desperation and extreme central bank financial repression because they painted themselves so deep into the corner that they’re lost and desperate.

Almost week by week, we have another central bank — most recently it was Sweden — lowering their money market rates into negative territory. The Swiss National Bank is already there. The Denmarks Nationalbank is there. The European Central Bank is there on the deposit rate. The Bank of Japan is there.

So all of the central banks of the world now are desperately driving interest rates into negative territory. I believe they’re lost. They’re in a race to the bottom whether they acknowledge it or not.

The People’s Bank of China, for example, can’t sit still much longer when the renminbi has appreciated something like 30% against the Japanese yen because of the massive bubble of monetary expansion that’s being created by Tokyo.

So that’s the first thing that’s happening: central banks are out of control and in a race to the bottom, sliding by the seat of their pants, making up incoherent theories as they go.

The second is increasing market disorder and volatility. In the last three months, the stock market has behaved like a drunken sailor. But it’s just a bunch of robots and day traders that are mindlessly trading chart points. It has nothing to do with information or incoming data about the real world.

One of these days, central banks are going to falter. And the market is going to reset violently.

Global malinvestment, fueled by central banks, is now coming home to roost. It will be driving a huge deflation of commodity and industrial prices worldwide. You can see that in iron ore, which is now barely holding $60 from a peak of $200.

Look at the Baltic Dry Index. (This is an index, created by the London-based Baltic Exchange, that tracks changes in the cost to transport raw materials by sea.)

This is a result of faltering demand for shipments and overbuilding of bulk carrier capacity as a result of this central bank-driven boom that we’ve had in the last 10 to 20 years. And it is going to be ripping through the financial system and the global economy in ways that we’ve never before experienced.

It will become extremely hard to predict what all the ramifications and cascading effects will be. But the degree of overinvestment and excess capacity in everything from iron ore mines… to dry bulk carriers… aluminum plants… steel mills… and so on — is something we have never seen before.

Demand has run smack up against peak debt.

We had a tremendous study come out in February from the McKinsey Global Institute. It did a good job of trying to calculate, track and total up the amount of global credit outstanding — public and private.

According to the report, we’re now at the $200 trillion threshold. That’s up from only about $140 trillion at the time of the crisis. So we’ve had a roughly $60 trillion expansion worldwide of debt since 2008. Over that same time, global GDP increased by only about $15 trillion (from $55 trillion to $70 trillion).

Owing to central bank money printing and all of this unprecedented monetary stimulus, we’ve added about $60 trillion of new debt. And we’ve gotten somewhere around $15 trillion — or not even one-third that amount — of extra output in return.

When you see that kind of minimal yield from the vast amount of new debt, it should tell you that the boom is over… and that the crack-up is under way.

The numbers from China are even more startling. At the time of the crisis — let’s go back to the year 2000 — China had $2 trillion of credit outstanding. It now has $28 trillion.

Credit has expanded 14 times in 14 years. There’s nothing like that in recorded history. Nor is there any plausible reason to believe that the Chinese economy — basically under a command-and-control system run from the top down by political-party cadres — could possibly create $26 trillion in new debt over such a short time. Not without creating massive inefficiencies, waste and mistakes throughout the system. Especially since China has no real markets.

At the time of the 2008 crisis, China had allegedly — if you believe the numbers, which no one really should — had $5 trillion of annual economic output. It’s now $10 trillion. So it’s doubled its GDP.

These are extreme unsustainable deformations. They just scream out, “Danger ahead. Mayhem has happened.” The unwinding of this deformation and the resolution of it is not going to be pretty.

When Helicopter Ben was Fed head, I said, “I invest in anything that Bernanke can’t destroy, including gold, canned beans, bottled water and flashlight batteries.”

And the same holds for Janet Yellen.

So the first thing you need to focus on is capital preservation — that is, not losing money. That’s more important than capital gains when government and central banks have gone rogue and have chronically violated every known rule of fiscal rectitude and sound money.

That means getting out of harm’s way in all the financial markets — debt, equity, commodities and derivatives — because when the big correction comes they will all experience a thundering collapse.

Second, short-term liquid investments and cash are not as bad as their microscopic yields imply.

The 20-year worldwide central bank credit boom has generated vast overinvestment in mining, manufacturing, transportation and distribution capacity worldwide. But now that the credit inflation is reaching its outer limits, and we are entering what I described as the “crack-up” phase, the forces of global deflation will drive down the price of goods and many consumer services as well.

When the next crisis fully materializes, cash will be king. It will buy more everyday goods and services and will have command over drastically marked-down financial and real estate assets of every kind.

Third, the impending collapse of the global central bank credit bubble will generate unprecedented volatility and drastic movements in asset prices of all kinds.

I have two specific recommendations…

On the wealth-building side, you should consider deploying your discretionary capital — in other words, money they can afford to lose — by shorting vastly overvalued momentum stocks such as Tesla. This could reap huge rewards in the next crash.

And on the wealth preservation side, you should buy the one asset that will be left standing tall when the central bank money printers finally fail — gold.