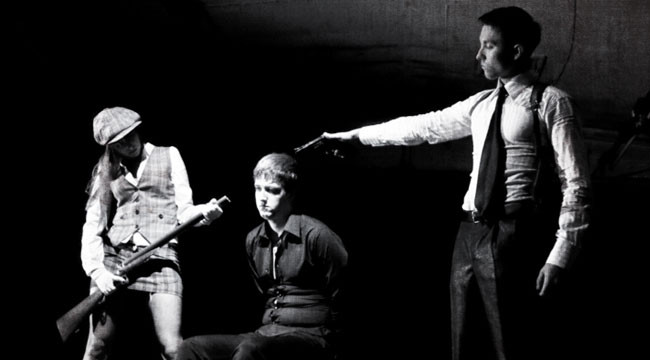 The Goodfellas of Wall Street

“America’s industrial economy — one in which companies compete not on price and quality but in political influence, and earn profits not by attracting customers with good service, but by using the power of the state to protect markets and force customers into the fold.” — Matt Taibbi, Griftopia

You know the routine. Mobsters shake down, say, a restaurant owner. They drink all the booze and eat all they want and pay nothing. They rob the cash register. They even go out and borrow money against the place and spend it. When they’ve finally bled the thing dry and the business is about to collapse, they burn the place down and collect the insurance money.

That’s pretty much what Goldman Sachs did to AIG. The taxpayer footed the bill.

We are fast approaching the fifth anniversary of the day the U.S. government stepped in to bail out AIG, the insurance giant. It happened over the weekend of Sept. 14, 2008. And even though I feel like I know the story, I keep learning new wrinkles about the whole debacle. It really was a mob job on the U.S. taxpayer — and just one of many during that whole crisis.

I’ll explain and show how this is still going on…

I was in Pompano Beach, Fla., this week with the family, visiting my 91-year-old grandmother. And I picked up a copy of Matt Taibbi’s Griftopia: A Story of Bankers, Politicians and the Most Audacious Power Grab in American History. It’s great beach reading.

Taibbi is a Rolling Stone correspondent and wrote the now immortal description of Goldman Sachs as a “vampire squid wrapped around the face of humanity, relentlessly jamming its blood funnel into anything that smells like money.” Hunter S. Thompson, probably the greatest writer ever to write for Rolling Stone, would be proud.

Taibbi is a worthy heir. The book, published in 2010, is mostly a collection of pieces that appeared in Rolling Stone from 2008-2010 reworked and updated with new material. Taibbi has style, and I like his prose. He has a gift with metaphor and simile.

He calls the crazy tactics of one hedge fund “the financial equivalent of performing open-heart surgery with unwashed hands, using a Super 8 motel bedspread as an operating table.”

He says Bernanke’s claim that a weak dollar only really affects Americans going abroad “is a bit like saying a forest fire only really sucks if you’re a woodpecker.”

Some people are turned off by his style, which involves occasional profanity. (His chapter on former Fed chief Alan Greenspan is titled “The Biggest Asshole in the Universe.”) But I like it because it has the effect of unmasking these criminals so we can see them for what they really are. Most of the government officials and corporate bigwigs under analysis are just high-class thieves.

Besides that, Taibbi does a lot of terrific investigative reporting. He’s more than a stylist. And I think his perspective is spot on. He fully appreciates that what we live in is an economy that is fast becoming a Kafkaesque nightmare.

“Your average working American looks around and sees evidence of government power over his life everywhere. He pays high taxes and can’t sell a house or a car without paying all sorts of fees. If he owns a business, inspectors come to his workplace once a year to gouge him for something whether he’s in compliance or not. If he wants to build a shed in his backyard, he needs a permit from some local thief in the clerk’s office.”

For most people, a run-in with government officialdom is something to be avoided. It means you are in for a costly experience, if not outright financial ruin — even when you’ve done nothing wrong.

But then there is what Taibbi calls the grifter class. These people use the government as a way of making money. This is a large and sweeping cast that includes people at the top of the financial/power pyramid — such as the senators, representatives and upper-level officialdom and the sharks at gangster firms like Goldman Sachs, Morgan Stanley, JP Morgan and the like. But it also includes lowlife crooks snookering everyday folks, bribing people, falsifying appraisals and generally acting like scum.

“The new America… is fast becoming a vast ghetto in which all of us, conservative and progressives, are being bled dry by a relatively tiny oligarchy of extremely clever financial criminals and their castrato henchmen in government… This stuff is difficult to unravel, often fiendishly so. But those invisible processes, those unseen labyrinths of the Grifter Archipelago that are indifferent to party affiliation, are our real politics. Which makes sense, if you think about it. It should always have been obvious that a country as rich and powerful as America should be governed by an immensely complex, labyrinthine political system, one that requires almost unspeakable cunning and wolfish ruthlessness to navigate with any success.”

If you can play the game, you can make a lot of money and take almost no risk. The taxpayer will pick up the tab.

One example Taibbi spends a good bit of time on is the whole housing bubble. I enjoyed reading some of the craziness of that era. The home in Fort Myers, Fla., that sold for $399,600 on Dec. 29, 2005, sold again the next day for $589,900 and was in foreclosure a month later. Or the $615,000 house sold to a glasscutter where the mortgage was 96% of his take-home pay. And then the Wall Street magic that turned this huge pile of mortgage garbage into AAA-rated securities.

Taibbi details the inner workings of it all in an accessible and fascinating way. He describes it as a “financial sewage system designed to stick us all with the raw waste and pump clean water back to Wall Street.” The amount of fraud and greed and thievery involved by all parties is still breathtaking to read about, even though I lived through it.

And this brings us to AIG. The chapter on this episode is called “Hot Potato.” In a sense, AIG was the firm that got stuck with the hot potato. It is a riveting story, actually, and I can’t do justice to it here. But it encapsulates the mafia-style economy we find ourselves in. Essentially, at the end of the tale, AIG owed Goldman Sachs tens of billions of dollars. AIG couldn’t pay it. So… Well, here’s Taibbi describing the showdown:

“When the CEO of Goldman Sachs stood up in the conference room of the New York Federal Reserve Bank and demanded his money, he did so knowing that it was more profitable to put AIG to the torch than it was to try to work things out. In the end, [CEO Lloyd] Blankfein and Goldman literally did a mob job on AIG, burning it to the ground for the ‘insurance’ of a government bailout they knew they would get…”

And they got it. Now, you might claim the taxpayer made money on the deal, as was widely been reported late last year. The idea is ridiculous, because AIG was clearly a heist in which AIG had no choice and the price offered was a fire sale price. (Not that we should feel sorry for AIG, which was a gangster firm with its own crooks). Besides, where is the check for the taxpayer? I never got it. The truth is the government used our money for free and taxpayers will never see it.

The whole perspective this book offers is important. Because if you think of the economy as this vast thing where success or failure is a matter of serving customers well, then you are deceiving yourself. (I’ve written about this before, about how America’s largest companies are basically products of state privilege.)

This perspective is good too because the reality of the thing shatters many illusions. Think Obamacare is a socialist redistribution scheme? Take another look. What it really amounts to is the largest corporate giveaway and pork-filled legislation in the history of the country.

The book also pops a lot of inflated reputations, like Warren Buffett’s. My view of Warren Buffett as a person has basically plummeted in the last half-decade or so. Buffett and his firm Berkshire Hathaway benefited immensely from government bailout money. Wells Fargo, of which Buffett is a major shareholder, got $50 billion in bailout money. In fact, many Berkshire holdings were direct beneficiaries of bailout money. And Buffett himself used his influence to make sweetheart deals with the government.

It makes you want to throw up, then, when Buffett’s vice chairman, Charlie Munger, said of struggling Americans during the housing bust that they should “suck it in and cope.” Yeah.

Buffett lobbied hard for taxpayer bailouts. He is, today, just another grifter — like Goldman Sachs — using taxpayer money and his influence over those in power to enrich himself and his corrupt firm. (As an aside, the hero worship around Buffett is sickening and sophomoric and really should end. Buffett was a great investor, perhaps the greatest that ever lived. But that doesn’t make him a good person, or a wise person, or even a great investor today. I know he’s giving his money to charity. Maybe he should start by giving it back to the people he stole it from.)

Honore de Balzac, the French novelist, once said that behind every great fortune there is a crime. Sadly, in the U.S., this is more and more often the case.

(By the way, Taibbi’s latest Rolling Stone piece is called “Ripping off Young America: The College Loan Scandal.” It shows again the same grifter dynamics at work. You can find it easily online.)

Anyway, Griftopia is a great book. I enjoyed it immensely and recommend it to anyone who wants to get a better understanding about how things work.

Chris Mayer
for the The Daily Reckoning

Ed. Note: The fact that Wall Street (along with a complicit U.S. government) is so perfectly screwing the American public should come as no surprise to anyone paying attention. But that doesn’t mean you have to take it lying down. You can (and should) take action to stop them from ruining your financial future. Sign up for The Daily Reckoning email, for free, right here. And start learning specific ways you can preserve and even grow your wealth no matter what the grifters try to pull.