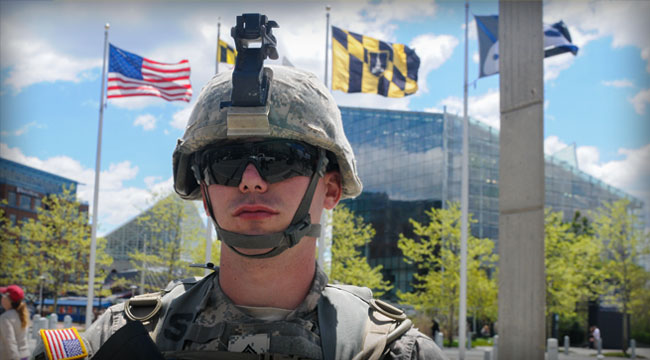 The Future of Cyberwar on Display in Baltimore

“We could smell that putrid smell of burning tires and a city on fire when we came into the city… I was sick to my stomach like everybody else… This was urban warfare, no question about it. They were coming in absolutely beaten down. The [city officers] got out of their vehicles, thanked us profusely for being there… They were told to stand down, you will not take any action, let them destroy property. I couldn’t believe it, I’m a 31-year veteran of law enforcement… I had never heard anything like this before in my life.”

Baltimore endured riots until the governor deployed the National Guard last week. Then due to fear of more rioting — evidently coordinated by a sophisticated social network of, umm… “community organizers” — the Baltimore Orioles played baseball inside an empty park.

What does this all mean? It means that the 20th century is just sooo over. The future of cyberwar is now.

Let’s take a look at what’s happening, and let me show you how software is enabling the contestants, for good and ill. Plus, I’ll show you how some companies will rise as America’s cities turn to cyber defense to keep the peace.

How does something like this happen? Well, let’s see…

Begin by exporting your country’s foundational factory-job base to low-wage nations. Then import 30 million Gastarbeiter – nice German word, no? – to, umm… “do jobs Americans won’t do.”

Meanwhile, the plot thickens. According to Fox News, “An analysis of social media traffic in downtown Baltimore Monday has unearthed striking connections to the protests in Ferguson, Missouri, last year, according to a leading data mining firm.”

The data mining firm is privately held Babel Street. The company presents itself as a source of “Internet due diligence.” According to Babel Street marketing info, “We characterize ideological and political orientation, Web footprint and topical trend analysis.” OK, so what does the foregoing really mean?

In essence, Babel Street creates a 360-degree panorama of any given data landscape. The company’s systems tap into online social media data flows and then collect, analyze, monitor and report patterns of information.

Software ties together source location and specific language, coupled with linguistic “sentiment analysis.” All in all, Babel Street tracks data sources, volume, velocity and variety — and then analyzes it, kind of like a “data interpreter,” so to speak.

The bottom line is that Babel Street helps answer who, when, where, what, why and how — all by transforming raw social media data streams into actionable intelligence. How actionable? Well…

As Monday’s riots unfolded, apparently, Babel Street was able to predict with solid accuracy where crowds were heading next. So far, so good… in that Big Brother sort of way.

C’mon… What else makes sense? Why would Major League Baseball agree to play an afternoon game to an empty set of stands? Really, is this good publicity for your business? 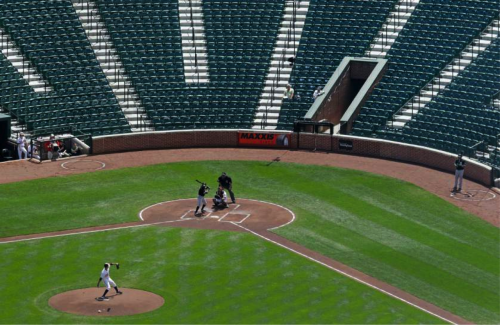 Empty stands: Somebody knew something.

Thus can software both enable riots and at the same time enable a forward-thinking, proactive response from law enforcement, politicians, even Big Sports — enough to close the doors to a baseball game. But that’s just the beginning.

If you get the impression that Baltimore politicians weren’t in the “war game” loop, or remotely psychologically prepared for riots the other day, I’d say you’re absolutely correct. The words “totally inept” come to mind, but then, I’m in a charitable mood.

Let’s just stipulate that Baltimore leadership’s collective head wasn’t in the game. Her honor the mayor seemed to think it was just a bunch of misguided youths out on a lark and frolic.

Meanwhile, law enforcement was there, many decked out in full battle-rattle; yet the boss ordered her cops to “stand down.” Even then, did those cops have the right crowd control equipment — and I don’t just mean body armor and tear gas? I mean, did they have actionable intelligence and a real plan, as opposed to, say, re-enacting the defeat of the legionaries of Rome at Cannae?

It gets back to an earth-changing phenomenon I showed you last June. I said, “High-level strategists are starting to build a consensus that poor, densely populated and fast-growing cities across the world are the No. 1 threat to overall global stability and our future national security. In other words, large, unstable cities are evolving into the world’s No. 1 security threat.

Yes, a year ago, I discussed the fast-evolving concept of global mega-slums, in sprawling cities on distant continents, like what we see in Rio de Janeiro, Cairo, Lagos and such. Last week, we saw a smaller version of that here in Charm City, USA.

It’s inevitable, too, as military, intelligence, law enforcement and other stakeholders work to keep this unstoppable trend from overwhelming borders, unleashing chaos within cities… and even defeating our armies.

This is a story you won’t get in mainstream media, either among sports fan or military planners. Yet policy people — those who make big decisions at very high levels — are watching this tale evolve, as they plan where to put their next billions of dollars in defense spending.

IBM (IBM: NYSE) has become a leader in building out large-scale “smart city” intelligence and command centers that gather and fuse critical information and Big Data into an overall picture for leadership cadre.

For example, take population information, widespread camera images, traffic data, utility flows of water and electric power, telecommunications data and more; then use it to develop an overhead picture of what’s happening on the street. Indeed, add in “Babel Street”-type Internet due diligence — in real-time — and marry it into the physical picture, to keep up with the fluid nature of the crowd and its troublemaking organizers.

Perhaps up until last week, many mayors across America likely didn’t ever think they’d encounter large-scale urban riots – “Oh, the LA riots are sooo 1992, right?” Well, now they had better get their head wrapped around the concept, post-Baltimore.

Meanwhile, don’t forget facial recognition, either. No, I don’t mean moms catching their delinquent children holding bricks, in flagrante delicto, like that now-famous Baltimore scene in which Toya Graham recognized her son under his hoodie, and beat the tar out of him for all the world to see.

Take this scenario, for example. Imagine a future in which rioters are scanned by cameras — such as cameras hand-held by police, embedded in streetlights, downloaded from spectators’ smartphones or via small aerial drones with high-powered cameras.

Right away, authorities will have near-incontrovertible evidence of who is/was at the scene of riots. Names, addresses, recorded imagery. Couple that with the ability to track people via their smartphones and/or to go after social media data such as tweets, Instagram, etc. (“Hey, here I am with my new television set.”)

Yes, it’s very “Big Brother-y.” Yes, it’s a level of state intrusion into privacy that we’ve not seen before. Yes, it’s a dark room into which we’re entering, in terms of fundamental legal rights. Plenty of issues here, no doubt.

Then again, when the cities are experiencing riots and the “putrid smell of burning tires” wafts into people’s noses… it may just seem like the right idea at the right time. At any rate, I’m not judging it or advocating for it. I’m just saying that it’s a trend, it’s happening — it’s investable. Already, in Military-Technology Alert, my readers are up as much as 137%, 63% and 41% — all from select plays within the defense sector.

On that closing thought, I’ll call it quits and bid you adieu.