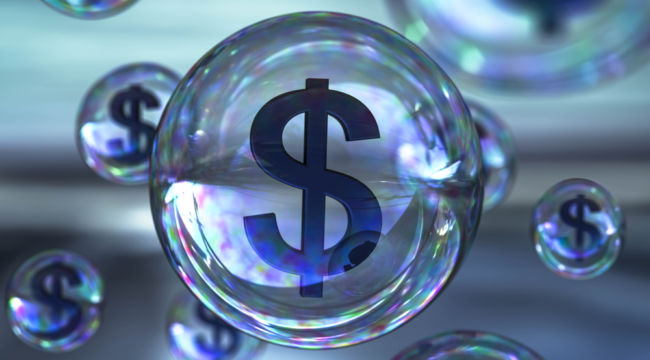 The Four Dynamics of Bubbles

Financial bubbles manifest three dynamics: The one we’re most familiar with is simple human greed, the desire to exploit a windfall and catch a work-free ride to riches.

The second dynamic gets much less attention. Financial manias arise when there is no other more productive, profitable use for capital. And these periods occur when there is an abundance of credit available to inflate the bubbles.

Humans respond to the incentives the system presents: If dealing illegal drugs can net $20,000 a month compared with $2,000 a month from a regular job, a certain percentage of the workforce is going to deal drugs.

In our current economy, corporations have sunk $2.5 trillion in buying back their own stocks because this generates the highest work-free return. This reflects two realities:

1. Corporations can’t find any other more productive, profitable use for their capital than buying back their own shares (enriching the managers via stock options and the 10% of American households who own 93% of the stocks).

2. Thanks to the Federal Reserve and other central banks injecting trillions of dollars of nearly free credit into the financial sector, corporations can borrow billions of dollars to play with at near-zero rates that are historically unprecedented.

So borrow billions at 2.5%, pour it all into buying back your own stock and reap the gains as your stock rises 10%.

(Note to New Green Deal advocates: If corporations reckoned they could earn more by investing the $2.5 trillion in alternative energy projects rather than stock buybacks, they would have done so.)

As various sources have outlined, corporate stock buybacks have been the primary driver of higher stock prices.

This is driving the third dynamic of bubbles:

As the bubble continues inflating beyond any rational valuation, rational investors throw in the towel and join the frenzy. Once again, this willingness to abandon rationality is partly fueled by greed and also by a dearth of other more attractive investments.

A bubble economy is a sick economy, for bubbles are proof there is too much capital chasing too few productive uses for that capital.

The Fed and other central banks have created trillions of dollars, yuan, euros and yen for corporations and financiers to play with and, to a lesser degree, for homebuyers to play with via low mortgage rates and federal guarantees on mortgages.

As a result, the housing bubble is the one regular folks can play. And despite claims that it’s not a bubble because of organic demand, housing is definitely in a bubble, along with stocks and bonds, art, etc.

When you create trillions of dollars, yuan, euros and yen out of thin air, you create the incentives to inflate bubbles. When your real economy is sick and offers few productive uses for all this excess capital, that only adds fuel to the speculative fire.

All of America’s bubbles will pop, and sooner rather than later. The stock market moves a bit faster than the housing and bond markets, but the bubbles that are visible in every market will all burst, much to everyone’s dismay.

We can add a fourth dynamic of bubbles: Nobody believes bubbles can burst until it’s too late to get out unscathed.

Below, we look ahead for the next five years. Will everything change in 2020-2025 or will nothing change? Read on.