The Fed Is Panicking

This week I’ve been in Washington, D.C. for high level meetings focused on the economy. While meeting with senior officials and members of the House and Senate, it became clear that a troubling phenomenon is building. 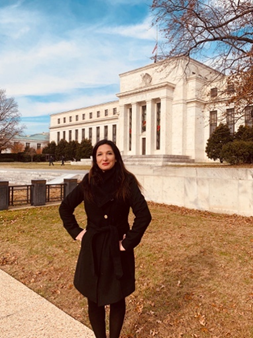 Your correspondent at the Eccles Federal Reserve
Board Building in Washington D.C.

In the wake of recent stock market volatility and uncertainty surrounding monetary policy, it seems that political figures are starting to grow concerned.

There is growing consensus that the makings of a financial crisis of some sort is building — and could drop sooner rather than later. While there is speculation over whether it will be as big as the last one, and whether it will come in waves, the belief is that something is wrong.

With those fears, I turned the Federal Reserve itself. While meeting at the Fed, I was given the impression that bank regulators have been routinely chastised by Wall Street bankers. What I learned is that some of the biggest playmakers in finance don’t want to disclose the true nature of their positions and money-making schemes. This confirmed my own experiences as an former investment banker.

In addition, it became clearer that Fed Chairman, Jay Powell, and Vice Chairman, Randal Quarles, will be closely studying real economic and bank data when rendering decisions about the path of interest rates. Many have speculated about such dealings, and whether they will be swayed by President Trump’s pressure.

The truth is that the leaders at the Fed have a firmer understanding of what’s really going on in the economy than they allude to publicly. Even though the Fed has been able to avoid another financial crisis the last decade, with quantitative easing (QE) policy — or what I call dark money — their “toolkit” might not render us “safe enough.” They need to grapple with this reality. 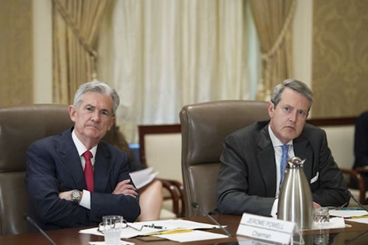 You see, the Fed manufacturers dark money that the markets have come to rely on. Through quantitative easing (QE) the central bank has accumulated a balance sheet that hit a high of $4.5 trillion of assets last year.

Currently the Fed’s book of assets has been reduced by only a bit — to about $4.1 trillion — but it’s still historically large.

If the Fed continues to sell those assets (which consist of treasury and mortgage bonds) there is a risk that their value will drop too much, too quickly. If bond values drop, then rates will rise in the middle and longer end of the yield curve. This would make it more expensive for most companies to repay, or extend, their corporate debts.

The Fed knows it is currently in a catch-22. That’s why over the last two weeks, it has barely sold any of its assets as volatility in the markets picked up.

Here’s something else you might not know: Two weeks ago, it even quietly increased its book of assets. That’s the opposite of the policy of unwinding, or selling its assets through quantitative tightening (QT), which is what Chairman Powell promised he would be doing.

That’s another sign that the Fed is afraid of a possible new financial crisis. For more proof, consider that former Fed Chair, Janet Yellen, just did a 180 on her prior comments related to the possibility of another crisis. Last June, she said that she didn’t think there would be another financial crisis in her lifetime, attributing this to banking reforms made since the 2008 financial crisis.

Now, everything has changed. Earlier this week, she told the New York Times that, “Corporate indebtedness is now quite high and I think it’s a danger that if there’s something else that causes a downturn, that high levels of corporate leverage could prolong the downturn and lead to lots of bankruptcies in the non-financial corporate sector.”

She noted that CLOs could be a real problem, as I’ve been warning for months. CLOs, or collateralized loan obligations, are a Wall Street product stuffed with corporate loans. If that sounds familiar to you, there’s a reason. Wall Street is doing exactly what they did with mortgage loans before the 2008 financial crisis, but with corporate ones.

Her timing was not random. Just because she’s no longer running the Fed doesn’t mean she has no contact with its new leader, who was her number two. The people and connections within central banks and Wall Street are always in play.

The danger in her analysis is that she’s largely mistaken that “current holders of corporate debt do not appear to be levered to excess, mitigating risk of any credit ripple effects.” The data bears this out.

In its inaugural Financial Stability Report, the Fed stressed lurking dangers in corporate debt. Although the Fed also used the opportunity to pat itself on the back for how well capitalized banks were, just as Janet Yellen did, the trouble was still highlighted.

The Fed noted that corporate debt relative to GDP is at record highs, and that credit standards have gotten worse again. The amount of junk bonds and leveraged loans or “risky debt” has risen by 5% in the third quarter of 2018 to over $2 trillion in size.

The central bank pointed to a number of other risks facing the markets. Those include the outcome of Brexit, Italy’s finances and a slowing European economy which could lead to more dollar appreciation. If the dollar were to continue to rise in value, it would make it harder for foreign companies that took out dollar-denominated debt to repay it.

The Fed also used the report to warn that trade wars, geopolitical tensions and slowdowns in China and other emerging market economies could negatively impact the U.S. economy and markets.

All of these factors could not only impact the markets, as we’ve seen over the past several weeks, but also begin to creep in on how companies are able to repay their debts.

Next week is the big Fed meeting. I don’t believe the Fed will raise rates this time, which would give markets a boost heading into the new year. If they do, the announcement will be accompanied with much more dovish language and guidance for 2019. Regardless, the problems aren’t going away and neither is volatility.