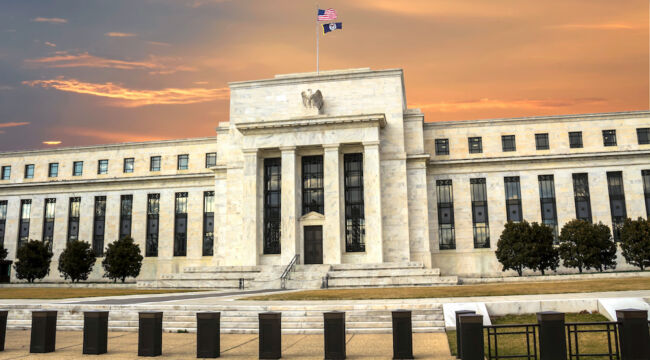 We have it on highest authority — the Federal Reserve itself — that it may never permit free markets again.

The Treasury market is now so large that the U.S. central bank may have to continue to be involved to keep it functioning properly.

Next we come to the president of the Federal Reserve’s San Francisco outpost — Mary Daly by name:

I am not willing to trade millions of jobs for people who need a ladder rung up in order to keep the stock market from going up for a few who have those holdings.

That is, Ms. Daly tacitly concedes that the institution for which she toils accounts heavily for the stock market’s ludicrous outperformance.

The Federal Reserve was originally fashioned to be the “lender of last resort.” Yet that designation is presently a cruel and mocking jest.

It has passed from lender of last resort to stockjobber.

Long have we known it. Now they admit it.

We will hear no more gabble about the stock market being a mirror of the economy.

We will hear no more gabble about the stock market “discounting the future.”

Indeed… we will hear no more gabble about free markets. Only traces, scraps, vestiges remain.

Reduce it to its essentials, and the message is this:

The Federal Reserve can never turn back. Massive intervention is here to stay, world without end.

One Intervention Leads To Another

Intervention puts out one fire only to start a second. Another intervention douses the second and a third erupts somewhere else.

The firemen are on permanent duty.

Let us cling to our fiery theme…

The wildfires presently raging in California are largely the result of poor forest management.

Under sound management, authorities initiate controlled burns to clear out the deadwood and underbrush that feed a blaze.

If a natural fire erupts, there is less combustible material to spread the trouble… and the fire is easier to barricade.

But the state of California has neglected to clear away the deadwood.

And so otherwise manageable fires have become hellish infernos that fanned out in horrific contagion.

The Federal Reserve is the state of California. It will not allow controlled burns.

Through its interventions it lets rotting and dying businesses and industries pile up — deadwood.

The forest becomes too big to fail.

The Federal Reserve would not allow a small fire… so it got a near conflagration… which required greater intervention yet to contain.

Scroll the calendar forward to 2020. The pestilence ignited the greatest economic fire since the Great Depression.

Or rather… authorities allowed the pestilence to ignite the greatest economic fire since the Great Depression.

Once again the crisis presented the Federal Reserve two options. The first was to let the fire complete the job the 2008 burning began.

The second was intervention on a vastly mightier scale.

The Federal Reserve selected option two of course. That is, it chose intervention on a supergargantuan scale.

Was it necessary under the nightmare circumstances? Perhaps it was.

Yet condemns the United States economy to a lost decade of stagnation… and drowsiness.

Debt Is a Drag

As we have explained before:

Each intervention piles up additional debt within the system. The system sags and groans under the added burden.

Progress slows as inefficient enterprises absorb capital — capital that could have flowed into worthier hands.

As summarized by Wikipedia, a central bank exists to:

The weak and inefficient know they will not succumb to the flames. The authorities will have the hoses on them if needed.

They survive. But thrive?

A Titanic Burglary of the Future

Plunging into debt introduces a sort of hand-to-mouth living. It diverts cash flow to the service of existing debt — often unproductive debt.

And so investment in the future never makes it past the present. It is a titanic burglary of the future, a grand heist.

Debt has one primary dynamic: Borrowing money to consume something in the present brings forward consumption and income.

Fifty years ago, $1 of debt may have yielded an additional dollar of economic growth, real or otherwise. Perhaps even more.

That is of course because the national debt burden was vastly lighter.

Each dollar borrowed since 2008 has yielded under $1 of growth. It is perhaps 40 cents by some estimates we have encountered.

It is a dismal calculus.

Meantime, this year’s budget deficit will likely near $4 trillion — the largest in history.

Goldman Sachs estimates a $6 trillion combined deficit over the next two years alone.

The Committee for a Responsible Federal Budget (do not laugh!) projects publicly held debt will eclipse its post-WWII record by 2023.

Debt service is already rising faster than any other federal shell-out.

Prior to this crisis the Congressional Budget Office had already projected debt service would scale $915 billion by 2028 — nearly 25% of the entire budget.

The Lord only knows the ultimate figure. But it will likely be far higher absent a drastic reversal of economic fortune.

How will the government afford to pay for anything else?

And so our shoulders stoop and our head lowers, forlorn. Yet we cling to hope, as a drowning man clings to a life ring — or as a drunkard clings to his bottle.

But the nation’s debt is not a crisis, argue the spenders. That is because “we owe it to ourselves.”

But one scalawag takes them at their word. “Note to self,” he writes: