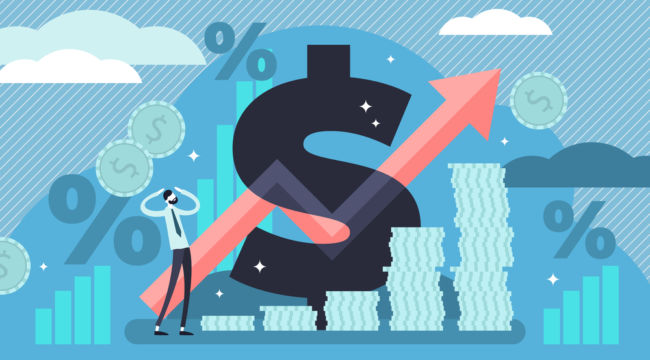 The Fast Track From No Inflation to Runaway Inflation

Today’s environment is drastically different than it was in the late ‘70’s and early ‘80s when inflation was nearly out of control. Today, disinflation is the primary challenge central banks face, not inflation.

It’s impossible to imagine another Volcker today. Today’s markets depend on the artificially low interest rates that the Fed’s been generating since 2009.  Raising interest rates would devastatingly pop the asset bubbles in stocks and elsewhere.

Remember how markets revolted against the possibility of further rate increases last December, when rates were still under 3%? Imagine 20% interest rates.

But the problems in the economy today are structural, not liquidity-related. Federal Reserve officials have of course misperceived the problem. The Fed is trying to solve structural problems with liquidity solutions. That will never work, but it might destroy confidence in the dollar in the process.

Fiat money can work but only if money issuance is rule-based and designed to maintain confidence. Today’s Fed has no rules and is on its way to destroying confidence. Based on present policy, a complete loss of confidence in the dollar and a global currency crisis is just a matter of time.

Consumer price inflation has remained persistently low, despite the Fed’s best efforts. This has led many people to ask where the inflation is, because the Fed has created trillions of dollars since the financial crisis.

But there has been inflation. It’s just been in assets like stocks, bonds, real estate, etc. The market’s back to record highs again, in case you haven’t heard.

The bottom line is, we’ve seen asset price inflation, and lots of it, too.

But the question everyone wants to know is when will we finally see consumer price inflation; when will all that money creation catch up at the grocery store and the gas pump?

The Fed is aiming for sustained 2% inflation. But it’s proven extremely difficult to accomplish.

Personal consumption expenditures (PCE) is the core price deflator, which is what the Fed looks at. Currently, it’s stuck below 2%. It hasn’t gone much of anywhere. But the Fed continues to try everything possible to get it to 2% with hopes to hit 3%.

Milton Friedman had a famous quote, that inflation is always and everywhere a monetary phenomenon. But it’s not really true.

Inflation is also a partial function of behavioral psychology. It’s very difficult to get people to change their inflation expectations after a trend has continued for a long time. So it’s very hard to raise inflation from under 2% to 3%.

But once it does, a psychological shift could occur, and it could lead to expectations of further inflation to come.

That’s because double-digit inflation is a non-linear development. What I mean is, inflation doesn’t go simply from 2%, to 3%, to 4%, to 5%, etc.

So is double-digit inflation rate within the next five years in the future?

It’s difficult to say exactly. But it is possible. If it does happen, inflation will likely strike with a vengeance.

Everyday people would be the greatest casualties.

Central bankers try to use inflation to reduce the real value of the debt to give debtors some relief in the hope that they might spend more and help the economy get moving again.

Of course, this form of relief comes at the expense of savers and investors who see the value of your assets decline.

It’s part of what I call the “money illusion.”

Money illusion has four stages. In stage one, the groundwork for inflation is laid by central banks but is not yet apparent to most investors. This is the “feel good” stage where people are counting their nominal gains but don’t see through the illusion.

Stage two is when inflation becomes more obvious. Investors still value their nominal gains and assume inflation is temporary and the central banks “have it under control.”

Stage three is when inflation begins to run away and central banks lose control. Now the illusion wears off. Savings and other fixed-income cash flows such as insurance, annuities and retirement checks rapidly lose value.

If you own hard assets prior to stage three, you’ll be spared. But if you don’t, it will be too late because the prices of hard assets will gap up before the money illusion wears off.

Finally, stage four can take one of two paths.

The first path is hyperinflation, such as Weimar Germany or Zimbabwe. In that case, all paper money and cash flows are destroyed and a new currency arises from the ashes of the old. The alternative is shock therapy of the kind Paul Volcker imposed in 1980.

In that case, interest rates are hiked as high as 20% to kill inflation, but nearly kill the economy in the process.

Right now, we are in late stage one, getting closer to stage two. Inflation is here in small doses and people barely notice. Savings are being slowly confiscated by inflation, but investors are still comforted by asset bubbles in stocks and real estate.

That’s why you should begin to buy some inflation insurance in the form of hard assets before the Stage Three super-spike puts the price of those assets out of reach.

This is why having a gold allocation now is of value. Because if and when these types of development begin happening, gold will be inaccessible.

I’m on record predicting that gold will go to $10,000 an ounce. To this point, I am often asked, “How can you say gold prices will rise to $10,000 without knowing developments in the world economy, or even what actions will be taken by the Federal Reserve?”

Well, the number is not made up. I don’t throw it out there to get headlines, et cetera. It’s the implied non-deflationary price of gold. Everyone says you can’t have a gold standard, because there’s not enough gold. But there’s always enough gold, you just have to get the price right.

That was the mistake made by Churchill in 1925, as described above. The world is not going to repeat that mistake. I’m not saying that we will have a gold standard. I’m saying if you have anything like a gold standard, it will be critical to get the price right. Paul Volcker said the same thing.

The analytical question is, you can have a gold standard if you get the price right; what is the non-deflationary price? What price would gold have to be in order to support global trade and commerce, and bank balance sheets, without reducing the money supply?

The now impending question is, are we going to have a gold standard?

That’s a function of collapse of confidence in central bank money, which we’re already seeing. But monetary resets have happened three times before, in 1914, 1939 and 1971. On average, it happens about every 30 or 40 years. We’re going on 50.

So we’re long overdue. Got gold?