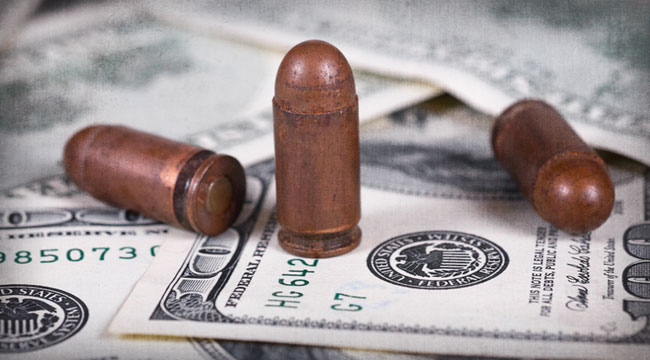 The Ethics of "Making the Empire Pay"

“When did you people turn into shills for the military-industrial complex,” asked one of our subscribers in an email to us.

“My security would be greatly enhanced if every damn one of ’em would go home forever and the entire machine would grind to a halt, so don’t try to pump this bilge my way.”

We hear you. And we agree.

We’re not much on socially responsible investing… even when we judge a certain investment vehicle to be thoroughly irresponsible, if not downright reprehensible.

“The insidious increase in power,” says retired army Col. Lawrence Wilkerson, “and the influence over foreign policy that the military has is very dangerous. And maybe in the long run, it’s even more dangerous than a coup.”

Wilkerson was Colin Powell’s right-hand man in the military under the first President Bush… and again in the State Department under the second. It was Wilkerson who vetted the intelligence that went into Powell’s now-infamous speech at the United Nations 10 years ago during the run-up to the Iraq War.

He admits he fell down on the job.

The “mobile bioweapons labs” were the fantasy of an Iraqi defector, egged on by the Pentagon. In retirement, Wilkerson has turned into a trenchant critic of the military-industrial complex Eisenhower warned about 52 years ago. As such, he is also the harbinger of the military’s slow-motion coup.

“What happens,” Wilkerson explained to radio host Rob Kall in November of 2012, “is the power shifts gradually, and gradually, and incrementally over to the war-making side, to where you wake up one morning and all you’re doing is making war. And you have so many people — from Lockheed Martin, to the Congress of the United States, to the armed forces, to you name it — who are making so much money off that war-making that you can’t stop it. That’s not a coup, but it is something worse, in my view. It is, ultimately, the destruction of our Republic.”

So why, you might ask, would we suggest investing in defense or cybersecurity stocks or — to use a phrase made popular when Americans were having second thoughts about World War I — the “merchants of death”?

Simply put, because there are pitfalls of “socially responsible investing.”

We’re not much on socially responsible investing… even when we judge a certain investment vehicle to be thoroughly irresponsible, if not downright reprehensible.

“Maximizing profits and conforming to social policies are separate endeavors,” wrote the late Harry Browne in 1995. “You can cater to one endeavor only at the expense of the other.”

Name almost any investment, and we can come up with a valid objection to it… and not on hippy-dippy “save the Earth” or “fair trade” grounds, either:

If you own a gold stock, there’s a good chance the company is stomping all over the property rights of someone whose land happens to sit on top of a gold deposit. Third-world governments routinely cut sweetheart deals with mining firms to seize land held in the same family for generations, with zip for compensation.

Meanwhile, if you shun the stocks of the major banks because they accept government bailouts, you’ve passed up monster rallies going back to late 2011 — 59% on J.P. Morgan Chase, 79% on Citigroup and 130% on Bank of America. Just sayin’.

Run down all 10 sectors of the S&P 500 and we’ll find something objectionable. Health care? The government has totally co-opted the insurance industry and Big Pharma… or maybe vice versa. Telecom? All the big companies collude with the National Security Agency’s warrantless wiretapping. Consumer staples? Hope you don’t mind General Mills and Kellogg sucking up the corn subsidies for breakfast cereal (and adding to kids’ waistlines, which you’ll pay for years from now when they develop diabetes and go on Medicaid).

OK, you get the idea.

Back to Col. Wilkerson’s interview. It reinforces our own thoughts about the empire having a logic of its own. The military’s silent coup “is something that just happens, and it directs American policy toward war in an increased and ever-dangerous manner, and we wind up one day with no money left, no economy, and the only thing we’re good at (and that’s going away fast, because you need money in an economy to support a military) is the military.”

We’re no happier about it than you or Col. Wilkerson. But if government is going to direct more and more of the economy going forward, it only makes sense to “follow the money” and channel your own investment flows into those areas that will benefit most.

“The stock exchange isn’t a pulpit,” wrote Harry Browne. “If you want to promote a particular environmental policy, political philosophy or other personal enthusiasm, do it with the profits you make from hardheaded investing.”

P.S. As we’ve said before, our beat at The Daily Reckoning is money. Whether the markets hit new highs or gold rallies above $2,000 or the dollar falls to zero… we’ll be there to reckon with it. And we’ll have a way for our readers to protect their own assets in the process. That’s why we publish The Daily Reckoning email, every day. To ensure that you know what to do with your money regardless of what comes next. We offer readers no less than 3 chances to learn about specific, actionable profit opportunities every day. So if you’re not getting the email, you’re missing the full story — and all the potential profits that come with it. Sign up for The Daily Reckoning, for FREE, right here.