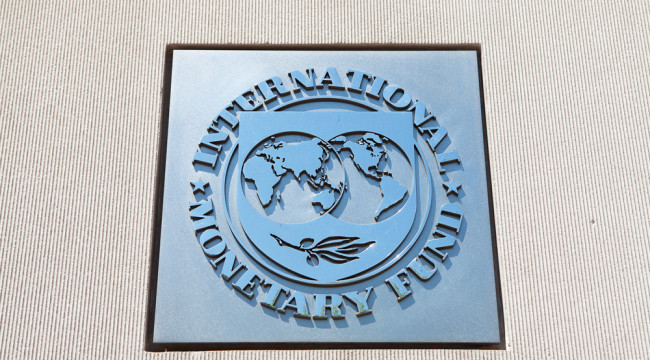 Be careful as you examine the following chart. It’s easy to draw the wrong lessons. 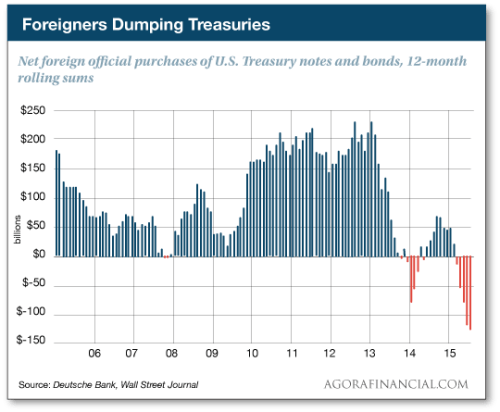 And don’t be misled by the front-page story in today’s Wall Street Journal: “Central banks around the world are selling U.S. government bonds at the fastest pace on record, the most dramatic shift in the $12.8 trillion Treasury market since the financial crisis.”

It’s tempting to think, Yes! Finally, the Chinese and the Russians are dumping Treasuries! Nobody wants them anymore! Soon Treasury prices will crash and interest rates will soar and those spendthrifts in the White House and Congress will finally get what’s coming to them! The deficit will spin out of control and Uncle Sam will be broke! No more welfare, no more crony capitalism, no more stupid foreign wars! Yes, things’ll get ugly for a while, but we can finally get a fresh start! We’ll be a free country again!

Sorry, it doesn’t work that way. Jim Rickards told us so during a Q-and-A episode of The 5 last month.

In the post-Panic of ’08 world, the big U.S. banks will always step up to buy the Treasuries no one else wants.

“They got bailed out in 2008, and first they were shellshocked,” Jim explained. “They were in a foxhole, and stuff was exploding over their heads. And they wake up in 2009 and go, ‘Wow, it’s over. We got bailed out. We still have our phony-baloney jobs, we still have our $1 million bonuses, nobody got fired, nobody went to jail. This is too good to be true. Isn’t the government wonderful? They bailed us out.’”

Ah, but at a price. “If the Chinese are going to dump Treasuries, the Fed just calls the banks and says, ‘You buy ’em or we’ll put you out of business.’ So yeah, there is selling pressure, but it’s being taken up by the banks.”

So… don’t look for any major disruption to markets or the economy just because foreigners are dumping Treasuries.

But corporate debt in emerging markets? That could “spill over to the financial sector and generate a vicious cycle,” says the International Monetary Fund.

The IMF is out this week with its semiannual Global Financial Stability Report. The current edition amounts to another one of those “warnings you’re not supposed to hear” — the kind Jim says are written in technical language and are read by only a handful of expert analysts.

But make no mistake — they are the power elite’s way of signaling each other: Danger ahead.

“Emerging markets should prepare for an increase in corporate failures,” says the report. That echoes a warning Jim has issued here in The 5 regularly since January — a $9 trillion wall of emerging-market debt, piled atop $5 trillion more of debt issued by energy companies. If only 10% of it goes into default — a conservative assumption, says Jim — we’re looking at a crisis six times worse than the subprime debacle that lead to the Panic of ’08.

So it’s not hard to read between the lines of the IMF’s sterile and stilted language: “When liquidity drops sharply, prices become less informative and less aligned with fundamentals, and tend to overreact, leading to increased volatility. In extreme conditions, markets can freeze altogether, with systemic repercussions.”