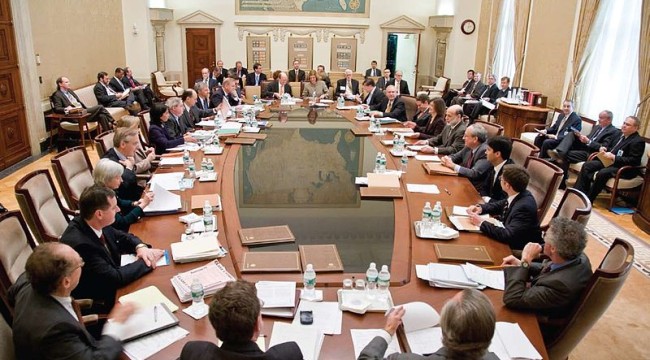 Yikes… If central bankers are worried about panic selling in the markets, the problem must be worse than they’re letting on.

After all, the Federal Reserve is the last bunch of people to figure anything out. Ben Bernanke dismissed the notion of a housing bubble in 2005: “We’ve never had a decline in house prices on a nationwide basis. What I think is more likely is that house prices will slow, maybe stabilize.”

In the aftermath of the housing/financial crisis, the Fed has confidently predicted — year after year — that the U.S. economy would soon return to “robust” annual growth of 3% or more. It remains stuck in low gear around 2%.

So if Fed economists are catching onto a risk in the markets, you can be sure it’s an even bigger deal than they make it out to be.

Research by the Federal Reserve Bank of New York takes on the conventional wisdom that an open-ended investment fund will never experience a run and will never have to dump its assets in a fire sale.

“The concern,” sums up the salmon-colored rag, “is that while most funds have cash buffers to deal with redemptions when they suffer smaller losses, big hits can cause withdrawals that overwhelm these cash reserves and force asset managers to sell hard-to-trade securities.

“That may in turn require them to sell at fire sale prices, hurting the fund’s performance further. This means that investors have an incentive to withdraw their money early — triggering a similar dynamic as in a bank run and hurting markets more widely.”

The New York Fed researchers focused largely on bond funds. But what they’re describing is the same phenomenon David Stockman was telling us about here yesterday. Only he was applying it to the biggest financial innovation of the 21st century.

We speak of the exchange-traded fund. “The number of ETFs has grown from about 600 to 5,500 in the last 12 years,” says David, “and assets under management (AUM) have exploded from $450 billion to $3 trillion.

“That’s a 21% compound rate of growth since 2005. Even more significantly, almost all of that growth occurred after the 2008 financial crisis.”

It’s David’s contention that whenever the next stock market crash arrives, ETFs will serve as a “doomsday loop” that will accelerate the selling like so…

For an example of a vulnerable ETF where this “doomsday loop” phenomenon will be in play, look no further than one of the big biotech ETFs — the iShares Nasdaq Biotechnology ETF (IBB).

When you buy IBB, you buy a “basket” of 150 biotech stocks. But what are you getting, exactly? “Even a cursory review of its particulars demonstrates that its current $1 trillion market cap has absolutely no rhyme or reason,” says David.

“This wildly diverse basket of biotech companies posted collective net income of about $26 billion in the most recent last 12 months period.” But all of that income was generated by just four companies — the “Big Four” biotechs of Amgen, Gilead, Celgene and Biogen.

“By contrast,” David goes on, “the bottom 125 companies in this ETF basket had more than $15 billion of aggregate net losses. Moreover, a high share of these red ink generators didn’t even have any revenues, let alone profits!

“Dozens and dozens of them, in fact, are science experiment startups burning venture capital and IPO proceeds and may never see the light of day as real operating businesses. For example, upward of half the companies in the IBB basket have not yet reached Phase 3 clinical trials at the FDA. This means that they do not even have a commercial product.

“The truth is even more farcical,” David continues.

“It turns out that roughly $13 billion of the $26 billion of profits posted by this entire ETF basket of 150 companies is accounted for by just two drugs!” They are Sovaldi and Harvoni, Gilead’s two drugs that treat hepatitis C.

“Remove Gilead and the other members of the Big Four from this ETF basket and take a gander at what you have left. Namely, $600 billion of market cap attributable to 146 other biotech companies that mainly produce rivers of red ink and scant revenues. There is no possible rational basis for their current valuation.”

The last seven years have been great for ETFs. The stock market went up, pushing ETFs up, pushing the market up further and so on. But now?

“We believe the dynamic will begin playing out in reverse,” says David. “The reason is straightforward. The $3 trillion world of ETFs is not an investor marketplace. It is a casino where the fast money moves in and out of short-term rips, bubbles and flavors of the moment. And also a dangerous place where naive retail investors have been lured to roll the dice on their home trading stations.”

Then there’s the matter of all those small illiquid stocks within the ETFs. “Retail investors may be faced with painful episodes in which ETF shares gap down violently to deep discounts relative to their net asset value,” David explains. “Accordingly, if shareholders have attempted to protect their portfolios with stop orders, they may be handed sharp losses. Or they may just panic and sell.”

There was a hint of this with IBB back on Aug. 24 — the day many ETFs experienced a “flash crash.” At its worst, IBB was down 16% on the day. But its underlying index, the Nasdaq Biotechnology Index, was down only 11%. As we explained yesterday, many other ETFs gapped down even worse relative to their underlying indexes — a phenomenon that in theory shouldn’t happen.

David is keen to sound the alarm about the coming ETF implosion… but he’s also eager to signal an opportunity that results. Play it right and you could quadruple your money over the next 14 months.

Already, David’s readers have had the chance to parlay the turmoil in IBB for a gain of 69% in less than four months. Another ETF-related play was good for 54% gains in only two weeks.

We’d hate to see you miss out on the next chance to thrive amid volatility. So David’s hosting a live online workshop just five days from now — Wednesday, Feb. 24 at 7:00 p.m. EST. Participation won’t cost you a thing. Just shoot us your email address and you’re in. Here’s where to sign up.