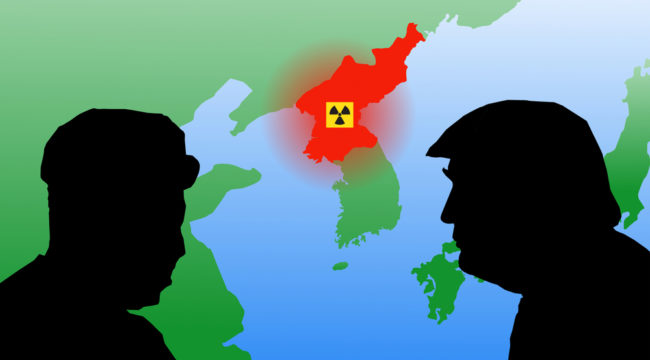 President Trump is wrapping up his historic visit to Asia today. Trump’s journey is the longest overseas trip of his presidency and the longest Asian visit of any president in 25 years.

The capstone of the trip was Trump’s arrival on Nov. 8 in Beijing for meetings with Chinese President Xi Jinping. Trump then headed for Vietnam late in the week and is concluding meetings in the Philippines today.

Much of the reporting on this trip has involved international trade, but it’s a mistake to focus on that. This trip was a prewar gathering of allies (Japan and South Korea) and potential allies (China) in a last-ditch struggle to head off a hot war with North Korea, led by the reckless Kim Jong Un.

At this point, there are only four possible outcomes of the U.S.-North Korea confrontation over nuclear weapons:

Based on public statements of U.S. officials, my recent meetings in Washington with the director of the CIA and the national security adviser and other sources, I estimate the degree distribution of those possible outcomes as follows:

Trump’s visits to Japan and South Korea were about leaving the door open to negotiations in the hope that Kim would stand down while also preparing for war. Trump’s visit to China was about asking for assistance in regime change.

Xi is unlikely to agree to help the U.S. in this regard. This means war. Instead, Trump and Xi no doubt discussed China’s “red lines” in North Korea so that a war between the U.S. and North Korea does not escalate into a war with China.

Almost none of this is fully priced in public markets, although markets seemed to be getting the message last week.

A war between the U.S. and North Korea will cause a global flight to quality assets and currencies at the expense of other asset classes.

Here are the likely market moves as the prospect of war becomes clear: Dollars, euros and Swiss francs will rally at the expense of emerging-market currencies. U.S. Treasury bonds will rally in price, pushing yields lower.

Gold will rally strongly, well past the $1,325 level, and then push higher.

Curiously, U.S. stocks may rally after an initial pullback when the shooting starts. Defense contractors, tech companies, commodities producers, utilities and energy companies should all rally. War is generally good for some sectors of the economy and may finally give the Fed the inflation it’s been looking for in vain the past eight years.

The war is likely coming in a matter of months.

Investors should look at the entry points for the assets described above and position themselves accordingly now (go here to learn about an urgent opportunity in the gold market).

At a minimum, it’s a good time to increase cash allocations so that you can be nimble and dodge financial bullets once the real bullets start to fly.

Below, I show you why the latest setback in North Korea’s nuclear program could actually speed up the timetable for war. Read on.