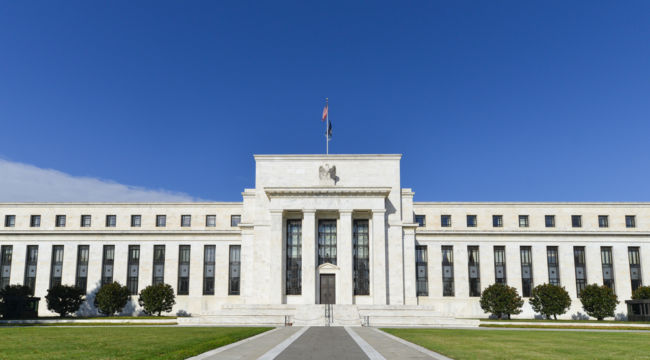 Yesterday the Federal Reserve released the minutes to its March conclave.

They raised no eyebrows, pulled no alarms, flustered no fish.

The brethren and sistren of the FOMC merely affirmed market convictions broadly held — no rate hikes this year.

The Dow Jones scratched a slender seven-point gain, the S&P 10. The Nasdaq staged a better showing — up 55 points yesterday.

But little blood was drawn.

The Dow Jones ended the day down 14 points, the Nasdaq 16. The S&P was even on the day.

But we are not so concerned with the light and transient breezes that ripple the surface on any given day.

Our interest is rather in the larger weather patterns… and the roiling undercurrents pulling markets hither, thither, yon.

Most of all we are fascinated by the storms…

And we have cause to believe a mighty gale is brewing.

First a step back to assess the prevailing trade winds…

One decade after the financial crisis, central banks remain enslaved to the stock market.

That is, the Federal Reserve cannot return to any rough approximation of “normal.”

Trump senior economic man Larry Kudlow even claimed today that he does not expect to see rising rates in his lifetime.

Mr. Kudlow is 71 years of age. We do not know how long he intends to tread this earth.

What if he expects to peg along another 20 years? And what if he is correct about interest rates?

The stock market has since gone on a beautiful spree. And the major indexes are once again within hailing distance of their records.

Meantime, financial conditions are the easiest in 25 years by some metrics. We are further informed that median Dow Jones stock valuations once again crest record heights.

In fact, median valuations rise some 20% above their dot-com peaks nearly two decades past.

That is, stocks remain historically expensive by this standard.

“The valuation extremes we are witnessing today are more pervasive than anything we have seen before,” affirms Jesse Felder, who generals the eponymous Felder Report. 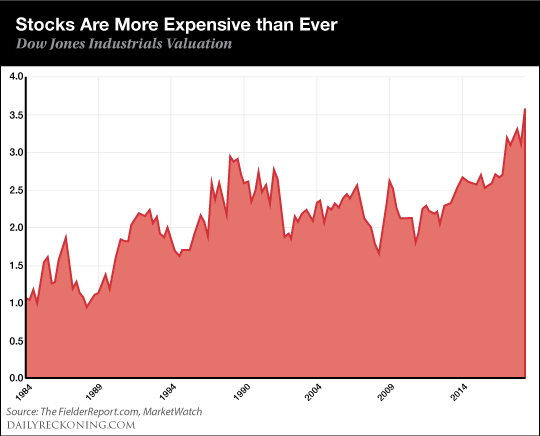 But it is not only the Dow Jones whose valuations rise to ludicrous heights — Felder insists median valuations in the other indexes yield identical results.

Are stock market valuations at record highs because the economy roars and animal spirits are restive?

It’s clearly the result of the greatest volume of price-insensitive buying we have ever seen before, namely stock buybacks and the widespread adoption of passive investing.

Stock buybacks and passive investing. Many and oft we have reckoned about both.

Let us consider them in the order presented…

“Without Company Buybacks, Demand for Shares Would Fall Dramatically”

Corporations have taken advantage of cheap debt and tax cuts to purchase their own stocks.

We have labeled buybacks a form of financial wizardry, a parlor trick.

That is because they elevate stock prices without any commensurate increase in company performance or profitability.

And perhaps 60% of last year’s buyback carnival was owed to the president’s corporate tax cuts.

How vital are buybacks to the stock market?

Meantime, an estimated $300 billion of buybacks may have spilled over into 2019.

Come we now to the second element of our gathering whirlwind — passive investing.

The Perils of Passive Investing

After the 2008 near-collapse, the emergency responders at the Federal Reserve inundated markets with oceans of liquidity.

The biblical-level flooding knocked down existing financial signposts… and “fundamentals” no longer seemed to matter.

The tide was rising, and all boats with it.

“Active” asset managers on the hunt for market inefficiencies could no longer separate winner from loser.

They track an overall index or asset category — not the individual components.

It is a strategy that has yielded handsome dividends this past decade of mostly rising waters.

And passive investing presently accounts for nearly half of all assets in U.S. stock funds.

All is swell as long as the tide continues to rise.

But when the tide recedes… it can wash the entire market out to sea quick as a wink.

Computer algorithms are boss in the passive investing universe.

Once the selling begins the computers fall into a selling delirium. And there aren’t enough humans to call it off.

There’s a vanishing cohort of human-powered funds with the conviction to snap up single-stock names in a falling market. They would act as a brake on losses.

What happens when we combine record buybacks with the perils of passive investing?

Recipe for a Record Fall

The recent phenomenon of stock buybacks has happened, by coincidence, with the epochal surge in the switch from active equity management to passive equity management. Since most corporate pensions (and many public pensions) hold passive equity exposure, even as the value of the stock market rises, they are forced to buy stocks at higher and higher prices. Everyone is happy… as long as prices keep rising. This collective dynamic is virtuous as long as the market is going up; that is, until the stock market corrects and there are no buyers.

We only await the record fall…