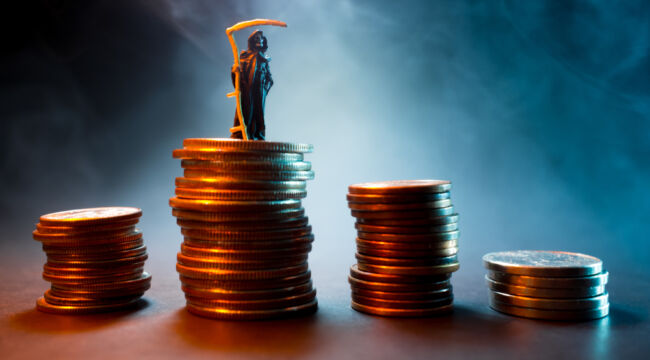 Kind heaven, no! A fresh economic scourge is upon the land. Announces CNN:

“New Threat to the Economy: Americans Are Saving Like It’s the 1980s.”

Is a higher evil possible? Thus we are informed:

Americans are slashing their spending, hoarding cash and shrinking their credit card debt as they fear their jobs could disappear during the coronavirus pandemic…

Although caution is a logical response to that uncertainty, hunkering down also poses a risk to the recovery in an economy dominated by consumer spending. A so-called V-shaped recovery can’t happen if consumers are sitting on the sidelines…

The savings rate in the United States climbed from 8% in February to 13.1% in March. That was the highest savings rate since November 1981.

The article further reminds us that consumer spending constitutes some 70% of the United States economy.

And so the old bugaboo rises from the grave yet again — the “paradox of thrift.”

The Evils of Saving

The individual saver may be the model of prudence, of frugality, of forbearance… of thrift itself.

But if the entire nation tied down its money?

A savage cycle would feed and feed upon itself… until the economy is devoured to the final crumbs.

Consumption would dwindle to near-nonexistence. GDP would collapse in a heap. Waves of bankruptcies would wash through.

All this because the selfishness of savers. They refuse to untie their purse strings… and spend for the greater good.

This paradox of thrift is perhaps the mother myth of economists in the Keynesian line.

Yet no paradox exists whatsoever.

Today we maintain — again — that saving is an unvarnished blessing, at all times, under all circumstances.

Let us first plunge a stake through the squirming heart of another myth:

It is government spending. Medicare and Medicaid, for example, are included.

Meantime, official GDP calculations do not include tremendous piles of economic doings.

These piles include business investment and spending on “intermediate” goods.

These of course are inputs required for the production of final goods — hence intermediate. They must first come in before consumer goods can go out.

The steel in the automobile, the sugar in the candy, the wood of the furniture… these are intermediate goods.

Consumer Spending Is Only 30% of GDP?

Yet their purchase does not classify as consumer spending — else they would be double-counted. Explains economist Mark Skousen:

GDP only measures the value of final output. It deliberately leaves out a big chunk of the economy — intermediate production or goods-in-process at the commodity, manufacturing and wholesale stages — to avoid double counting.

Now mix in expenditures on intermediate goods. What do we find?

We find that consumer consumption only constitutes perhaps 30% of GDP. Skousen:

I calculated total spending (sales or receipts) in the economy at all stages to be more than double GDP… By this measure — which I have dubbed gross domestic expenditures, or GDE — consumption represents only about 30% of the economy, while business investment (including intermediate output) represents over 50%.

We might add that Americans purchase heaps of foreign goods. These purchases add little to the gross domestic product.

Perhaps consumer spending accounts for less than 30% of GDP. We speculate of course. We have not interrogated the figures.

We now revisit our central claim — that saving is an unvarnished blessing, at all times, under all circumstances.

“From time immemorial proverbial wisdom has taught the virtues of saving,” wrote Henry Hazlitt 74 years ago, “and warned against the consequences of prodigality and waste.”

But to the anti-savers… prodigality and waste are near-virtues at times as these.

They have forgotten their Say’s law — perhaps purposefully.

Say’s law holds that supply creates its own demand. “Products are paid for with products,” argued Jean-Batiste Say over two centuries ago.

Here we return to an example we have previously cited…

The Baker and the Shoemaker

Let us say the baker bakes a baker’s dozen — 13 loaves of bread. He consumes two of them.

The remaining 11 loaves represent his savings. He can peddle them for other goods: shoes in our little example.

Meantime, the cobbler cobbles together 13 pairs of shoes. He requires one new pair for himself. He further sets aside two pairs for his growing children.

This fellow “consumes” three pairs of shoes, that is. The remaining ten constitute his savings. Like our baker, he can exchange his savings for goods.

Buying Is Actually a Form of Barter

They may transact in money — direct barter is primitive. But upon closer examination we see their transactions in fact constitute an indirect barter.

Money merely throws an illusory veil across the transactions.

That is, each has paid for his items through savings.

What is more, the goods a man acquires through savings sees him through… and allows him to produce more loaves, more shoes.

And savings spring from production.

Yet the enemies of savings turn Say’s law upon its head. They sob not about a lack of production but a “lack of demand.”

That is, they place the wagon cart of consumption before the draft horse of production.

The government must race the printing press to make the shortage good, to furnish the lacking demand.

But no new production accompanies the flood of money. The additional money merely chases the existing stock of goods.

It is the pursuit of alchemy, of lead into gold, of the free lunch. It is the half-conscious belief that the print press is the spark plug of prosperity.

“But what about times like these?” counter the author of the CNN article. “If everybody saved, the economy would collapse. Remember the paradox of thrift. If government doesn’t step in and spend, who will?”

But the old dead economists argue there is no paradox whatsoever…

No Paradox of Thrift

What applies to the individual applies to society at large, they insist. What is society but a collection of individuals, after all?

If saving during depressed times is such a vicious economic crime… how has any economy gotten back up?

The standard logic assumes all such economies corkscrew down and down into oblivion.

Yet as history demonstrates abundantly, they recover. As we have also explained before…

When society saves in lean times, it is not eliminating consumption — it is merely delaying it.

Or according to Hazlitt: