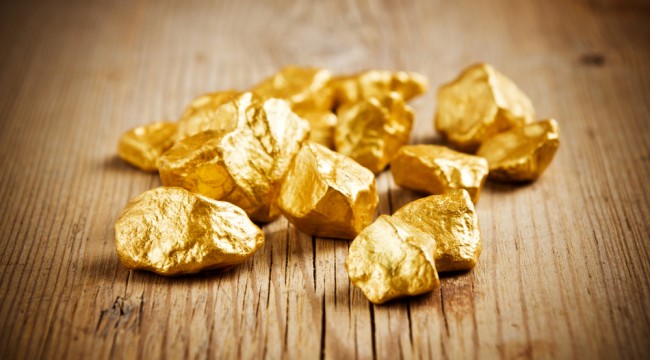 The Best Bet Against a Reckless Fed

If you’ve been wondering if the Fed will ever destroy the trillions of dollars it has printed since 2008, wonder no more…

Since 2007, the U.S. monetary base has soared from $800 billion to $3.7 trillion. Such unprecedented inflation is the product of round after round of quantitative easing (QE): 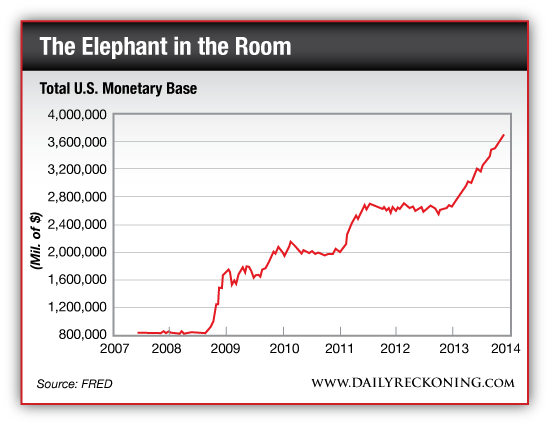 Each time the Fed launched a new QE program, it assured the public it had an “exit strategy” from unconventional policy. Investors assume an exit strategy involves reversing QE — selling assets (Treasuries and mortgage-backed securities) and destroying the money the Fed had previously created. But if you pay attention to the key decision-makers at the Fed, it becomes clear that odds of a shrinking monetary base are next to nil…

Talk of shrinking the Fed’s balance sheet is very premature. First, it needs to slow (or “taper”) the rate at which it’s printing and expanding its balance sheet. We got a measly $10 billion in tapering last FOMC meeting.

Then, it needs to stop printing; the last two times the Fed stopped printing, in 2010 and 2011, there were brutal sell-offs in stocks and other risky assets. Finally, if the reaction to stopping the printing press hasn’t already panicked the Fed back into easing, it might try reversing its prior QE operations.

We wish them good luck! A contraction of the Fed’s balance sheet would start a stampede to sell overinflated, risky assets. The Fed probably has models predicting how the markets should respond to a reversal of QE. But as we saw last spring after Bernanke quietly suggested QE would one day end, the rapid doubling of long-term interest rates took the Fed by surprise.

Investors assume tapering is a dramatic change in Federal Reserve behavior. And they expect tapering will crush the gold market yet again. So a broader perspective is revealing.

Here’s a chart showing the growth in the Fed’s balance sheet through the end of 2014, assuming no taper (in black) and a $20 billion-per-month taper (in red). Notice the difference? There is hardly any difference. And remember, the Fed only tapered by half that amount! 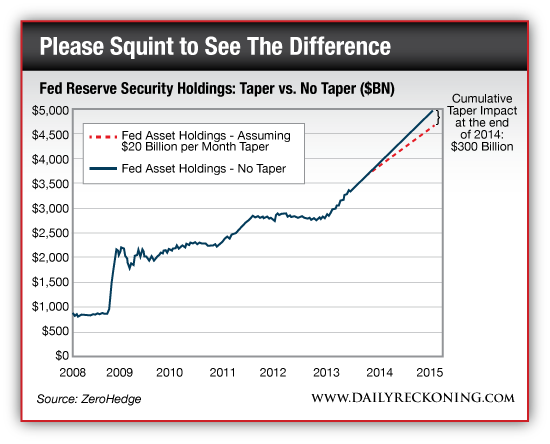 With all the media attention on tapering (and its impact on gold prices), one would think the Fed is on the verge of unwinding its entire post-2008 balance sheet surge. But an unwinding would be so destructive to the delicate “wealth effect” it isn’t going to occur. The trillions that have been created aren’t going to be destroyed.

Here’s how the Fed will tighten, if it tightens at all…

The Fed will retain all the bonds it has acquired — at least until they mature. If the Fed feels the need to adjust short-term rates, it may attempt to use repurchase agreements, or “repo” trades. Put simply, repos involve the Fed selling securities from its balance sheet while simultaneously agreeing to buy them back at a specified time and price (repos get more complicated from here).

In the old-school, pre-2008 era, the Fed raised the fed funds rate — the rate at which banks lend reserve balances to other banks overnight — by shrinking the supply of reserves available to borrow. Unless and until the Fed shrinks its balance sheet (and the supply of excess reserves) by trillions of dollars, it won’t be able to raise the fed funds rate to even a meager 1%.

Instead, if the Fed ever wants to raise short-term rates again, it’s much more likely to use repo trades to set interest rates in the money markets. Repo trades are a “chicken” way of temporarily (not permanently) selling Treasuries and mortgages from its balance sheet.

The alternative — permanent asset sales — would shrink the Fed’s balance sheet and the monetary base. Since repos are a tamer, market-friendly choice, we can expect the Fed to try using repos.

Movements in gold should reflect the recklessness of central bank policy over the last two years.

The global paper money system tends to seize up as soon as it starts going in reverse. Liquidity, once injected, tends to stay in the system. So central banks may talk tough, but they’ll keep acting easy.

Besides, where is this mythical U.S. economy that exists in isolation from the Fed’s manipulation? Take away the Fed stimulus — which pumps up asset prices and pulls forward future consumption — and all stimulus-fueled activity would come crashing to a halt. Easy auto and mortgage financing have pulled forward demand for cars and houses, respectively. Higher interest rates would put pressure on Washington politicians to cut long-term entitlement spending plans, which in turn would depress the industries and households that rely on government spending.

In other words, this mythical “self-sustaining” U.S. economic expansion — one which will allow a normalization of monetary policy — exists only in the minds of Fed academics. Japan, for example, is still in a hopelessly stimulus-addicted situation 20 years after entering into “unconventional” policy. Its economy would be vaporized if interest rates were to rise just one or two percentage points.

Movements in gold should reflect the recklessness of central bank policy over the last two years. The market didn’t see it as reckless, so some investors sold gold under the belief central banks are all-powerful and haven’t trapped themselves into permanently easy policy.

Ed. Note: The Fed will never destroy – through “tapering” or some other monetary scheme – the trillions of dollars it has created out of thin air since 2008. Now, you can choose  to believe that or not. It’s entirely up to you. But wouldn’t you like to be prepared either way? That’s why Dan wrote this piece, and why we featured it in today’s Daily Reckoning email edition – along with 3 specific opportunities to discover real, actionable picks to help combat any further “monetary disorder.” It’s just a small benefit of being a Daily Reckoning reader. So don’t wait. Sign up for FREE, right here, and never miss another great opportunity to grow your wealth regardless of what the Fed does.