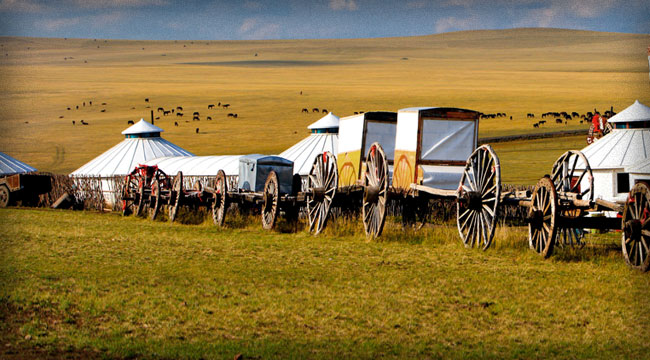 In 1881, Dakota Territory had never sold a bushel of wheat to anybody outside of Dakota. Six years later, it sold 62 million bushels.

I recently read Garet Garrett’s The American Story, which came out in 1955. It is a well-written history of America — unusual because of its emphasis on the powerful economics that drove the country to great heights. Garrett tells the Dakota story in this book, which is a useful reminder about how economies grow and prosper.

What happened in Dakota was that farmers invested in machinery. The riding plow, the reaper and the combine harvester made the farms far more productive than they had been. Suddenly, the labors of one man could produce 5,000 bushels of wheat. A single miller could turn that wheat into 1,000 pounds of flour.

But that was not all. New railroads connected the farmer to the mill and the mill with markets and ports in the East. The energies released were enormous. Garrett writes:

“So the labor of four men — one a farmer in Dakota, one a miller in Minneapolis and two on the railroad — plus a very low rate for ocean carriage — could put into Europe enough flour to feed 1,000 people for a year.”

Let’s look at another example: steel. In 1870, there was nothing anyone would call a steel industry in the U.S. Americans bought their steel from Europe. Yet 30 years later, Americans would produce more steel than Germany, France and England put together.

Again, the investment in machines and rail and roads unleashed a torrent of once-frozen economic potential.

Those forces worked wonders as a free people tinkered, invented and created. “In sheds and attics and little machine shops everywhere,” Garrett writes, “with sticks and strings and glue and bits of metal, eccentric minds were making models of things that might work, either to save labor or to save time — two thoughts with the same meaning.”

Steam drills. Sewing machines. Electric lamps. Rotary printing presses. Cranes and elevators. Steam engines. Steel ships. Air brakes. Plumbing. Refrigeration. All of these things arrived in the years that followed… and so did a kind of national prosperity the world had never seen.

This is the work of a free people. Testing things. Trying them out. Succeeding and failing. It is a rough laboratory from which winners and losers emerge through trial and error. It is what builds great wealth, great economies and great countries.

It is the American story of two centuries past.

While there are no virgin places for a new American story to take root, no empty continents where a people might go to try to build something from scratch, there are new versions of the American story unfolding in places likely to produce astounding wealth in similar ways.

In places like Mongolia or Myanmar, for example, you find today’s Dakota Territory. Not that Mongolians are as free as those American pioneers, but there is so much frozen potential to unlock by applying technology and know-how and capital to their situations. It’s these mind-bending changes — and the lure of profiting by them — that attract me to explore the world beyond the developed West. 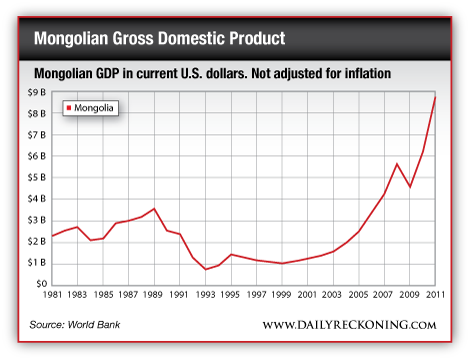 For example, in 10 years, Mongolia may well be among the richest countries, on a per capita basis, in the world.

The long-term trends here are undeniable and will take years to fully play out. I know it is hard to take the long view. I get panicky emails all the time from my subscribers who fret over this or that stock because it is hasn’t gone up after six months or a year. I know most people will not follow me no matter what I say. They will own a stock for a few months or maybe a year, and when it doesn’t pan out, they will sell out. On to the next great thing!

But in the real world, great stories unfold slowly. As with the American story, they take their time in the telling, with many digressions along the way. Learn to enjoy the story and think long term. Don’t get distracted by the daily and weekly march of news and prices.

Keep your sights on the grander story and stick with the original thesis as long as it remains valid!